I have previously discussed children being objectified for the media in relation to beauty pageants as noted which analysing a video from an interview on This Morning with Sami Bushell, whom fake tan’s her 3-year-old daughter. I wrote that, “this [was] resonant with Lacan and Freud’s understanding of the ‘Mirror Stage’, whereby between 6 to 18 months old, a child becomes self-aware of their reflection in a mirror, and becomes concious of such reflection, even though at this stage of their lives have very little mental or physical abilities which are possessed by adults. This shows that whilst even though a child can not control how they look, they become aware, and become aware of what they see is normal, relating back to the Beauty Pageant and Saami Bushell’s daughter as noted above” (this post can be found here) and feel that this can also be applied in this context also. I came across the below child-beauty blogger whilst scrolling through Instagram (a source of research, feedback and self-promotion of work in regards to this MA) and came across a video re-posted by make-up artist turned cosmetics designer, ‘HudaBeauty’. The video can be seen below – a 5-year-old girl (Instagram: ‘Makayla.Starr’) flawlessly applying makeup, being charismatic and acting like any 20-something-year-old would do in the same ‘position’. The video was evidently reposted after watching all the way through due to one of Huda’s eyeshadow palettes being featured – an interesting form of objectifying advertising in my opinion, exposing a vulnerable child for ‘likes’ and ‘cute’ comments whilst inevitably boosting sales, and exposure of Makayla herself disregarding how this may affect how people perceive her and judge her at a young age, whilst also giving others the impression that this is ‘okay’ and ‘normal’.

Similarly to Bushell, Makayla’s Instagram page is ran by her mum, which raises a range of questions and issues which I feel should be discussed in relation to my working research question and current practice.

I personally find it quite troubling at a mother is allowing her daughter  of 5-years-old to take part in such adult activities, let alone publicly show this to the world. When I found this profile, Makayla had 191k followers as shown on the screenshot. A few days later when I have come to writing this post, her account has now reached 229k followers and a collaboration with “Glitter Injections” (the first photo on the Instagram screenshot) showing how quickly she is gaining a following, however along with a following comes scrutiny or praise which are reflected in the comments and ‘feedback’. 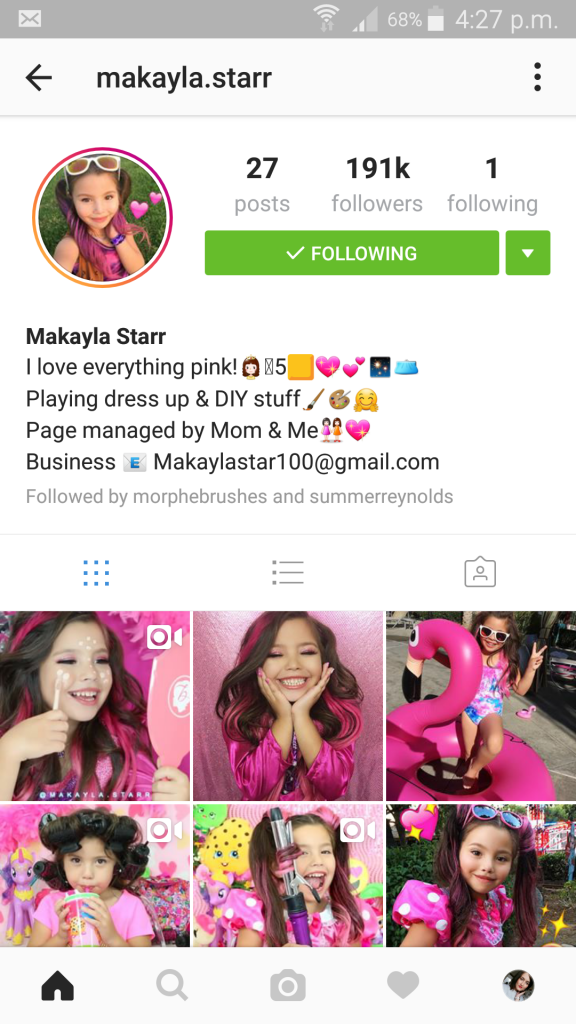 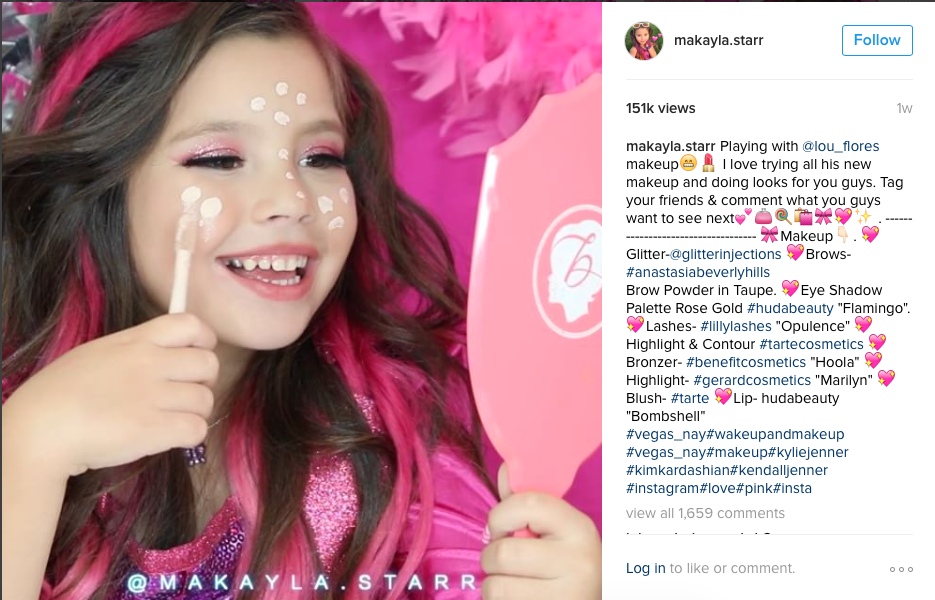 Above Images – Screenshots of Video Tutorial

The above video is how I came to find Makayala – a video tutorial originally posted by Huda Beauty. This video shows Makaylya doing her makeup like a true professional, contouring and using a range of products as 20-something-year-olds-would. Also being professionally filmed, it is evident that this along with her other posts have been planned with her mum. I also found it quite disturbing that the caption is written like a true makeup artist or blogger, perfectly compiled and grammatically correct – more than that of a 5-year-old alone could achieve. To counteract the fact her mum has put together the captions for Makayalas’ posts are girly and cute emoticons to bring back down the tone and appeal to a younger, female audience.

I really, heavily disagree with this video in the sense that from a young age, 18-months as Freud and Lacan note in the ‘Mirror Theory’ stage, become aware of their reflection and subsequent ego, allowing for Makayla to recognise herself dressed up as such and perceive this as normal as she grows up. I also feel also though she is being heavily objectified as a marketing commodity promoting brands, and with other brands and makeup artists for example such as Huda Beauty, re-posting this video for likes, follows and to drive sales. Furthermore, as Fredreckson and Roberts (2008) point out in their Self-Objectification theory that “valuing one’s own body from a third-person-perspective” is more important than their own thoughts about themselves, recognising their value visually and physically opposed to emotionally and intelectually. I feel that this theory can be embedded into a child at a young age if placed in objectifying scenarios such as this, paginating or cheerleading for example.

I feel that by posting videos as above, and photographs as shown below, it is apparent that perhaps she is unaware of how such exposure and objectification can and may affect her mentally in the future, and may also affect her self-perception due to “[interpreting] our own actions the way we interpret others’ actions, and our actions are often socially influenced and not produced out of our own free will, as we might expect[1]”, Bem (1972). I feel that this quote from Bem summarises that our self-perceptions are created by how we put ourselves out there, therefore curating a desired image. I believe that this is what will happen with Makayla, her perception will be curated by that of the image she puts out there but also with how this is perceived by others intern shaping her own perceptions. At a young age, I feel this cycle is dangerous and could lead to issues with her identity and mental health, for example as she grows older, whilst also opening up avenues for public shaming and bullying for example for those whom do not agree with what she is doing due to having such a public platform which appears, evidently to be growing at an extremely quick rate. In addition to this, I wonder how this image may affect others her age at school for example, or whilst having ‘playtime’ if this is her ‘image’ all the time. Does this make other children feel as though this is normal seeing not only their elders, people on tv, parents, peers and now friends with made-up faces and dyed hair. Will this make them feel less confident and insecure about themselves ensuing changes are made? 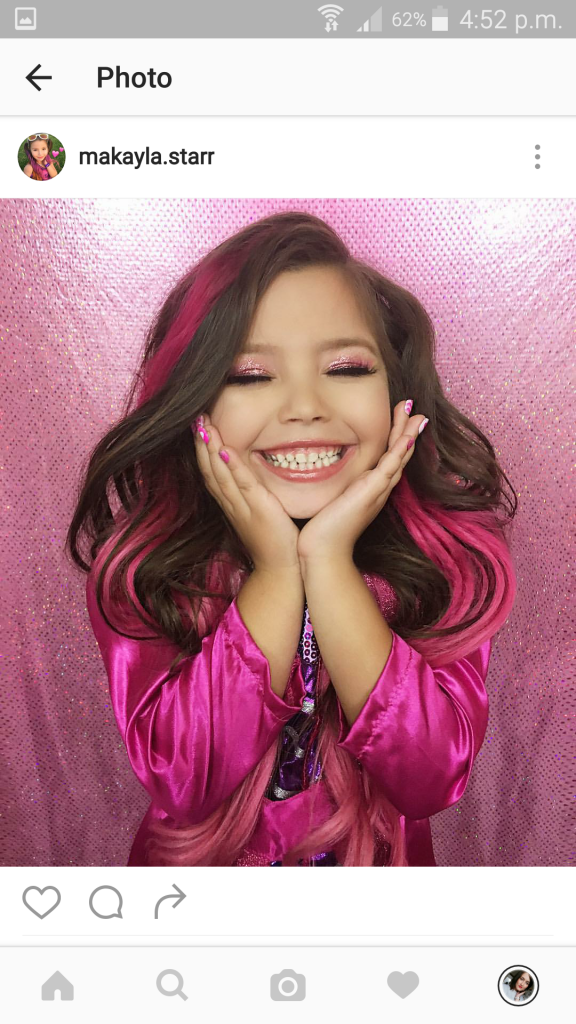 In regards to the image shown and discussed above, I briefly noted how bullying and public shaming could come into play using social media as a platform to share her ‘looks’, however I have also noted many negative comments from those whom don’t agree which such actions. The below comments have been taken as screenshots from the above photo. I was surprised to see how many people asked about her age, disagreed with the actions of hair dying and cosmetics at 5-year-old and publicly shamed her mum for “showing [your] kid how to not love themselves for who they are… at a young age” (‘breezy hall’) and also criticised dental hygiene suggesting that the focus has been placed in the wrong place when bringing up a child. I particularly found this comment quite moving, “she’s so young to be learning about which insecurities to cover up” (‘alexis.emerald’) in regards to the truth to behind why women ultimately wear make-up; to improve their appearance and hide blemishes. No child of 5-year-old needs to improve their appearance or cover up their innocent, natural beauty which is the main consensus from the comments shown below. 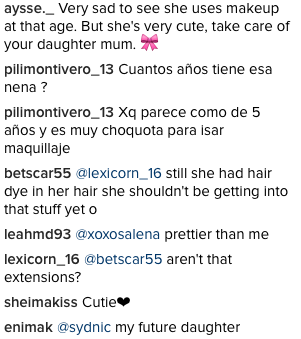 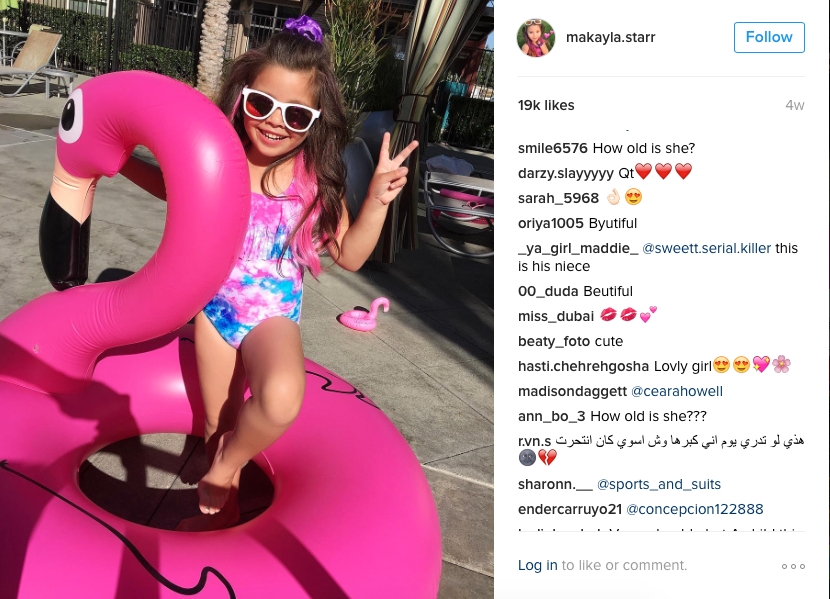 Above shows another screenshot from Makayla’s Instagram page, however this time appears to be a much more sexually-objectifying photo gaining a wide-range of comments and feedback, both positive and negative. I find this image much more alarming in comparison to the above in the sense that this has been shared on social media on a public profile being on 5-years-old. Opposed to objectifying her ‘beauty’ and make-up skills, this image sexually-objectifies her body in a way which causes alarm for many of the ‘commenters’.

The range of comments below show that of an inappropriate sexual nature, whilst many also comment on this raising the point that simply anyone in the world, anywhere can access this photograph at any given time. I feel this one comment from ‘melzy005’ summarises this concisely, “don’t u realise there’s pedophiles on the net! I would keep your daughters page private! Seriously mother look what that person said about posting the childs bedroom! There’s one right there! Also wtf she’s only 5!”. 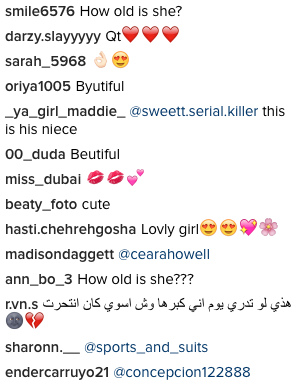 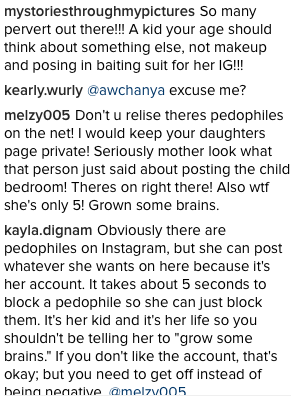 Upon further research I came across an article on Allure, which showed videos and photos of Makayla in January 2016, noting that “Lou Flores, a celebrity makeup artist who has close to 1 million Instagram followers, has been posting videos of her insanely adorable four-year-old niece Makayla showing off her hairstyles and makeup products” explaining how Makayla has reached such fame so quickly, whilst also explaining why she appears to be so good at makeup. This reveals to me that Makayla has most likely grown up from a young age as previously discussed, being aware of her ‘image’ and ego, whilst growing up watching a professional apply makeup to learn from has most likely had a huge influence on her, whilst most likely also being an encouragement. This evidences Freud and Lacan’s Mirror Stage Theory noting that from an early age Makayla has been exposed to such visuals, norms and ideals affecting her self-perception from a very young age, therefore now at the age of 5, most likely feels as though this is the norm and is considered socially and culturally accepted.

Below shows images of Makayla on Lou Flores Instagram page prior to having her own set up by her mum. 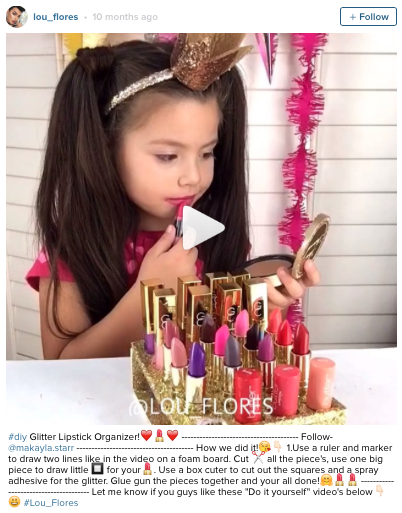 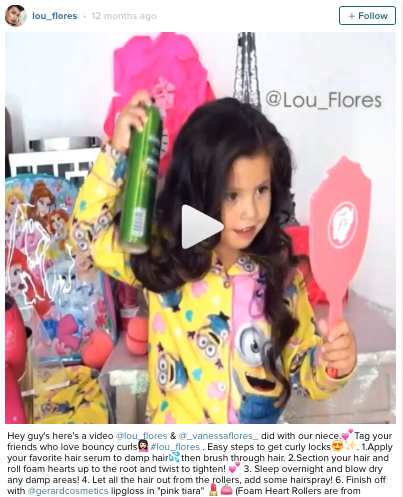 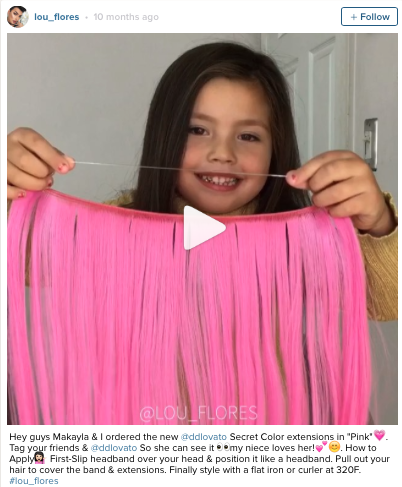 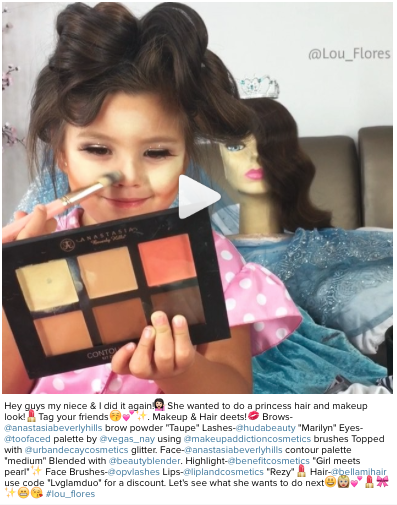 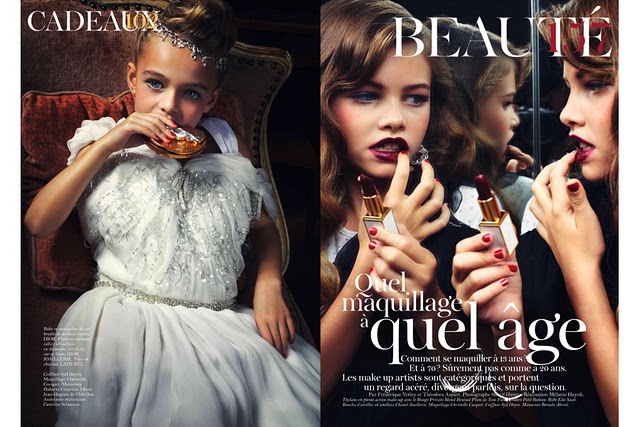 In addition to the Instagram star Makayla Starr discussed above in regards to objectification, I came across whilst researching the topic the above image – a spread taken from Vogue France. “Quel maquillage a quel age” translating to “what makeup at what age?” boasts the headline overlaying an image a young girl holding a Tom Ford lipstick and glaring at her gaze intently in the mirror, being extremely aware of herself, her actions and objectification.

Fredericton and Roberts (1998) wrote that “objectification occurs whenever a woman’s body, body parts, or sexual functions are separated out from her person, reduced to the status of mere instruments, or regarded as if they were capable of representing her. In other words women are treated as bodies – and in particular, as bodies that exist for the use and pleasure of others” and feel even though the subject matter is a ‘woman’ the child in question on said photograph is being objectified in the same manner as that of a fully-grown woman. Even though the headline questions almost whether makeup at a young age is a good idea or not, the associative images are quite provocative and representative of a “woman’s body [or] body parts”. I feel it is such explicit imagery which could be taken as as more teen or adult which can damage expectations of beauty at such young ages not only for the child, but their parents also.