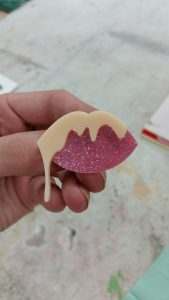 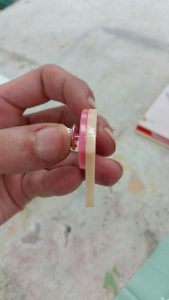 After creating the above badges using an ivory 3mm acrylic, and a 3mm sparkle acrylic, I posted the photos on social media and they received a really positive reaction. I also posted photos of the red/cream and red/sparkle combos, and again the pink sparkle remained the favourite in colour. I feel personally that this is due to being quite girly, fun and appropriate with the context in association with a young, female target audience. Furthermore, pin badges have recently in the past few months become quite a big trend, and therefore feel this is another reason why on Instagram did well. I appreciate this feedback as it allows me to make judgments going forward. I had 3 messages via Instagram asking if a badge could be purchased. Making prototypes at first, and not ‘by trade’ being a product-maker, had not considered making such products for sale, however thought going forward perhaps may be worth while considering as a hobby or even as a part of this project – by building a range of products for the “what’s my name again?!” project, at some point I could set up an online campaign site with an associate promotional merchandise store page selling such products, or could enquire about craft fairs such as at Belgrave, LCA fairs, The Corn Exchange, Makers Markets and Easy fairs which I could potentially hold a stall at. I feel that by attending one of the events perhaps in the future and trailing this out, this could also be a very good form of feedback and first hand research engaging with the public and seeing their reactions/noting their discourse surrounding the concept at hand. This would also share the message which I am striving for and the ultimate reason as to why this project was started. By showcasing products such as this on social media and on online stores/campaign sites/website etc, I would be reaching a local, national and international audience, opposed to a local audience as noted above.

In response to the above, I wanted to research into how much coloured sparkle acrylics are to create different colour combinations and to introduce totally new designs also if I was to go forward and develop this element of the project further.

I had obtained the pink acrylic when I was studying for my BA(Hons) Graphic Design degree and never actually used it. I thought to make the most of it would trial it not expecting such good feedback. I was aware that it did cost around 4 times as much as standard 3mm acrylic but did not realise how hard it was to source, especially in smaller, affordable sizes.

‘Sheet Plastics’ online store as shown below stock a range of coloured sparkle acrylic but only in large sizes at 1850 x 1250 inch and costs £291.67 excluding VAT. This is too expensive to buy for further experiments and would only be viable if mass producing products to sell.

From here, I tried the official Perspex company whom design and produce a vast range of acrylics. Via there website found that they have a Leeds distribution office. I called and enquired in regards to the specific pink glitter acrylic needed at A3 size at the largest, and was told that they don’t have any stock currently however again only supply in large sizes and mainly to trade, i.e. for kitchen splash backs. However, upon a long discussion about the pink acrylic, the lady spoken to was kind enough to offer to send me samples of a similar Pink Pearlescent acrylic which she recommended as an alternative, therefore I can produce a sample to photograph and submit without a huge cost implication. 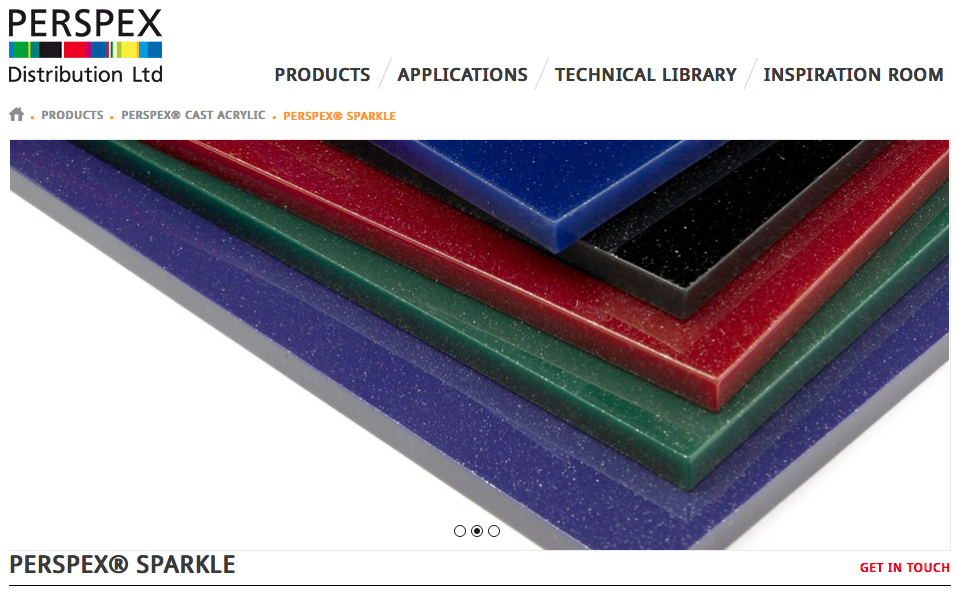 From this I found The Plastic Shop, again whom have a local distribution centre in Leeds to see if they sourced the acrylic needed at the right size. The same as above was noted, being that there isn’t any in stock but alternate samples could be arranged. Due to it not being most popular, it is assumed that it is not produced and distributed as widely as more standard, primary colours.

Following this I happened to stumble on to Hindley’s which is a UK supplier of acrylics and design materials, i.e. wood, etc, and happened to find the exact product I am looking for at a more reasonable cost and size, 60cm x 40 cm at £28.01 with VAT. Even though it took almost a day of phone calls and endless websites, I am happy to of found a supplier which can deliver efficiently in the UK, and which has the right product in stock at a reasonable price.