Below shows the initial draft and script for the 2nd Professional Context presentation. I have prepared this in advance in order to run-through with my supervisor to ensure I am within time, conforming with feedback received in the last presentation and delivering relevant content. Following this run-through, I will edit the slides prior to the interim submission, and furthermore update and work on the script to ensure I feel confident and fully prepared ahead of delivering the presentation. I felt last time being overtime and being conscious of this, put me off slightly and made me feel quite nervous not allowing me to get across all of the relevant points as concisely as desired, and feel some of the key points of my current practice were missed out due to this. Therefore, I want to ensure these problems are alleviated prior to the the day. 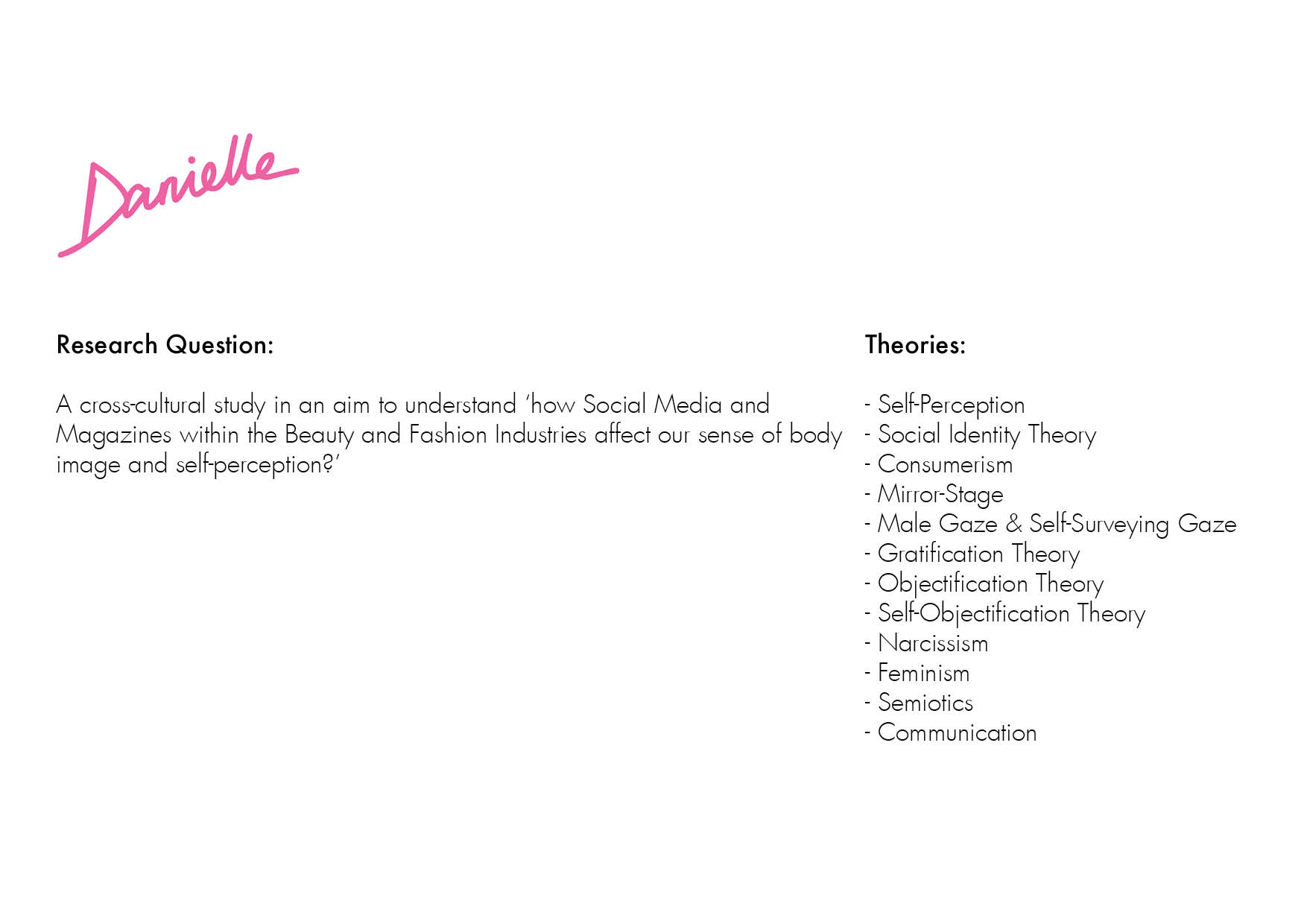 I feel as though the media should be held accountable in regards to being responsible in regards to promoting ‘ideals’ for women in particular to aspire to be like, leading to theorists to discuss and debate options as to why women’s self-perception can change through these external influences.

My research question is, “a cross-cultural study in an aim to understand ‘how Social Media and Magazines within the Beauty and Fashion Industries affect our sense of body image and self-perception?” and have therefore been looking into and researching various theories coinciding with my current practice.

I have listed various theories, I have touched on during research in relation to my specific research question, however, for the purposes of this presentation will cover several key theories which I feel at this moment in time are most relevant to my practice – Self-Perception Theory, Social Identity Theory, The Male Gaze and The Self Surveying Gaze, along with the Theories of Objectification and Self-Objectification. 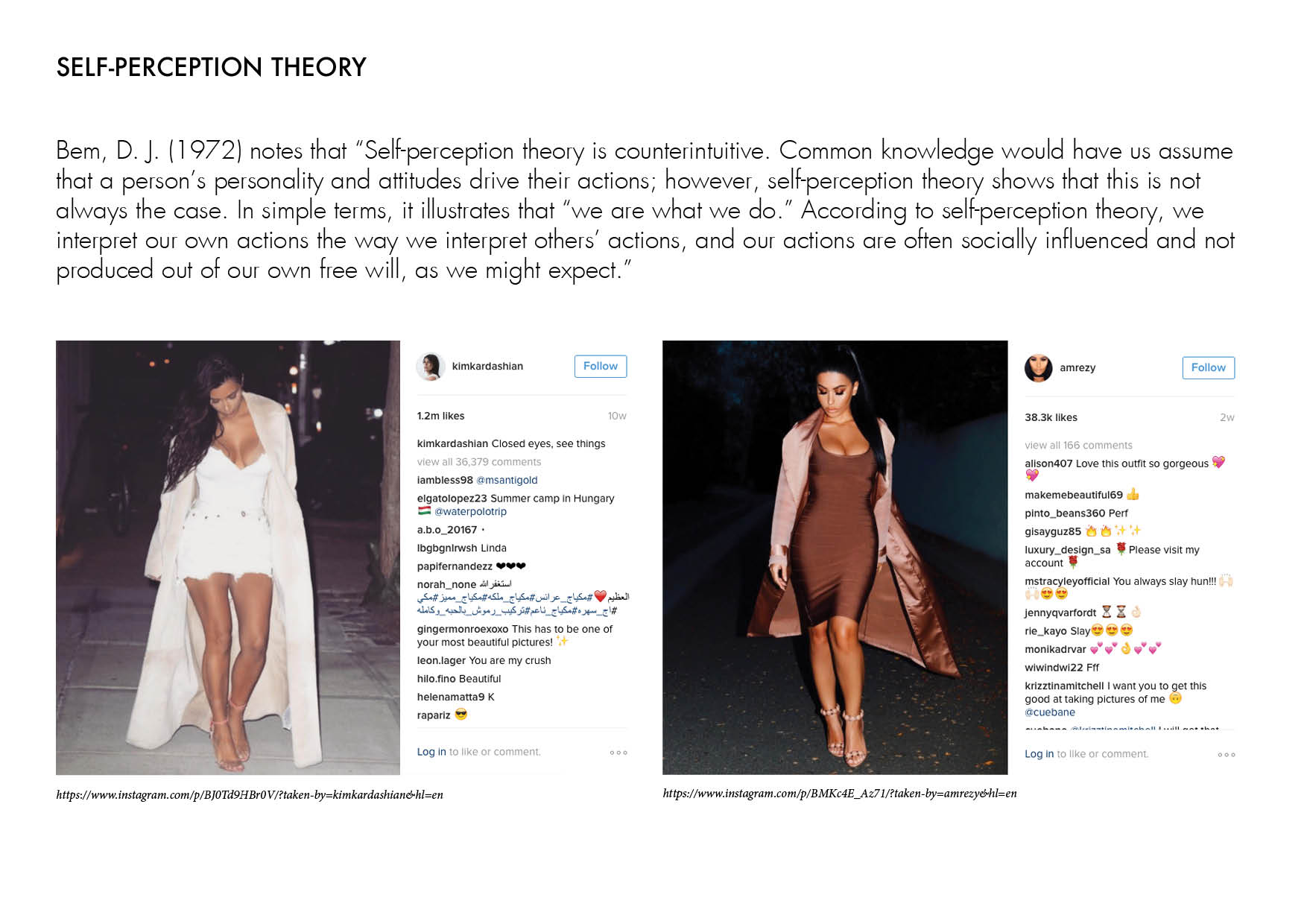 Theorist Bem in 1972 noted that, the “self-perception theory is counterintuitive. Common knowledge would have us assume that a person’s personality and attitudes drive their actions; however, self-perception theory shows that this is not always the case. In simple terms, it illustrates that “we are what we do.” I found it interesting that Bem continued to state that we interpret our actions and the actions of others, therefore allowing our actions to be socially influenced opposed to be being completely self-led.

Bem also noted that, “according to self-perception theory, we interpret our own actions the way we interpret others’ actions, and our actions are often socially influenced and not produced out of our own free will, as we might expect.” I found that this resonated with the two images shown – one of Kim Kardashian, and one of Makeup Artist/Instagram Icon, Amreezy – both show that they are practically holding the same pose in similar attire, with similar postures and facial features. Does this example alone represent how social media has affected our self-perception into allowing us to feel it is okay to perceive ourselves, or see ourselves in a similar way to others in order to attain positive appraisal? This is one example, of how us the public, can use our aspirations and ‘ideals’ to shape our own identities and egos, which leads me on to the theory of Social Identity. 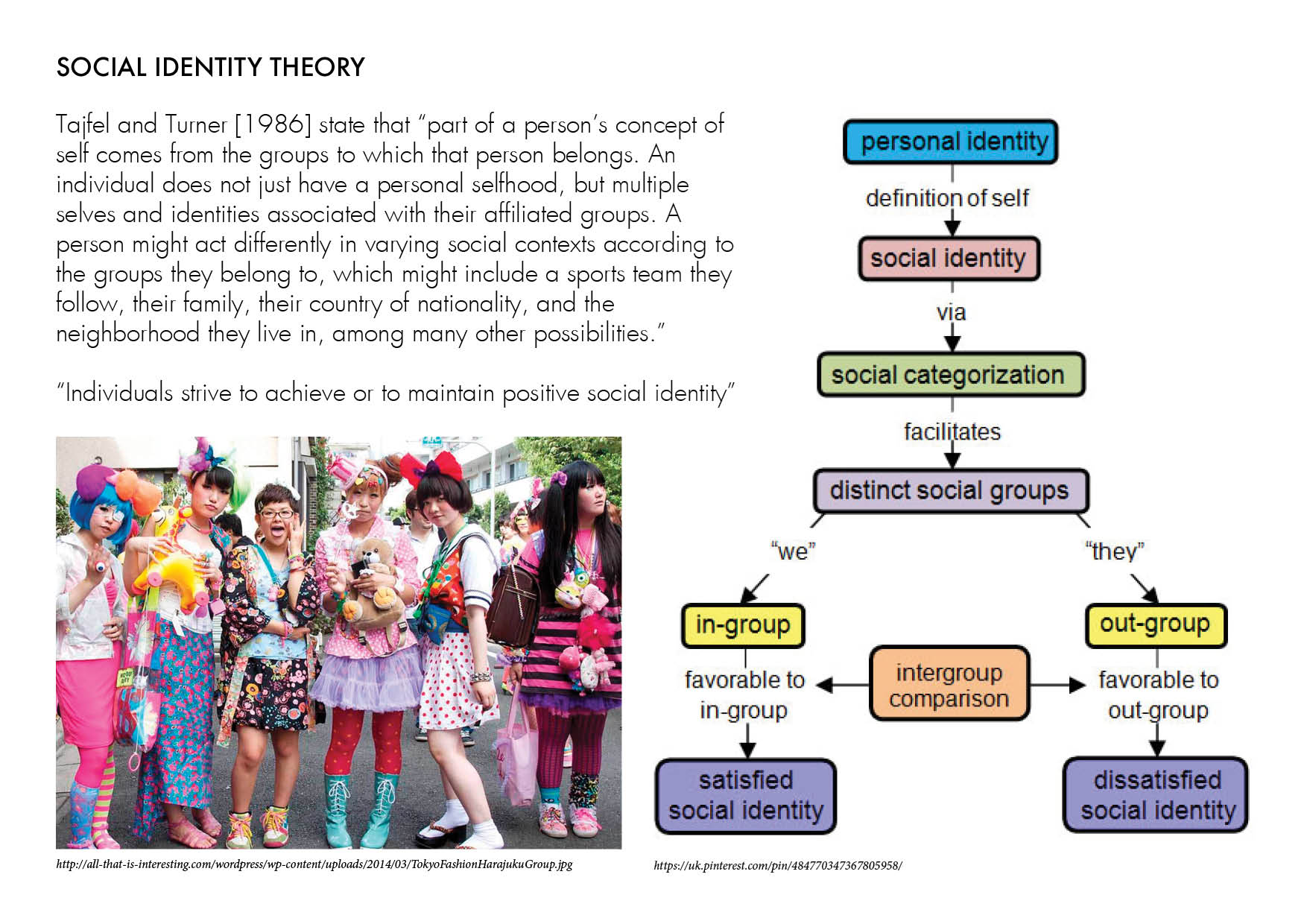 The Social identity theory was originated from two British social psychologists – Henri Tajfel and John Turner in 1979, and states that “part of a person’s concept of self comes from the groups to which that person belongs. An individual does not just have a personal selfhood, but multiple selves and identities associated with their affiliated groups. A person might act differently in varying social contexts according to the groups they belong to” acknowledging the fact that people act different, and at times look differently also depending on their social situation at the time. Tafjel and Turner note that this could be groups such as sports teams or family, however this can also be said for the way that people now position themselves on Social Media, curating their identities to ‘fit in’, whilst celebrities often featured in weekly gossip magazines, do the same. This can also be said for alternate groups of people also, especially within fashion whereby perhaps they do not fit in the groups that are perceived as ‘normal’ by many. This can be seen in the image of the Harajuku girls, whom have accepted the social identity of which they belong and feel satisfied with their social identity.

This is reflected through the shown Social Identity Theory model, which shows how ones personal identity and sense of self, is formed through their acceptance or non-acceptance into a social group, and the retrospective intergroup comparisons. ­

Tafjel and Turner also note how “individuals strive to achieve or maintain positive social identity” in order to feel accepted and confident. This is profoundly common on Social Media with many girls posting photos for aesthetic approval and the boost of their self-esteem.

SLIDE 4 – MALE GAZE AND THE SELF SURVEYING GAZE 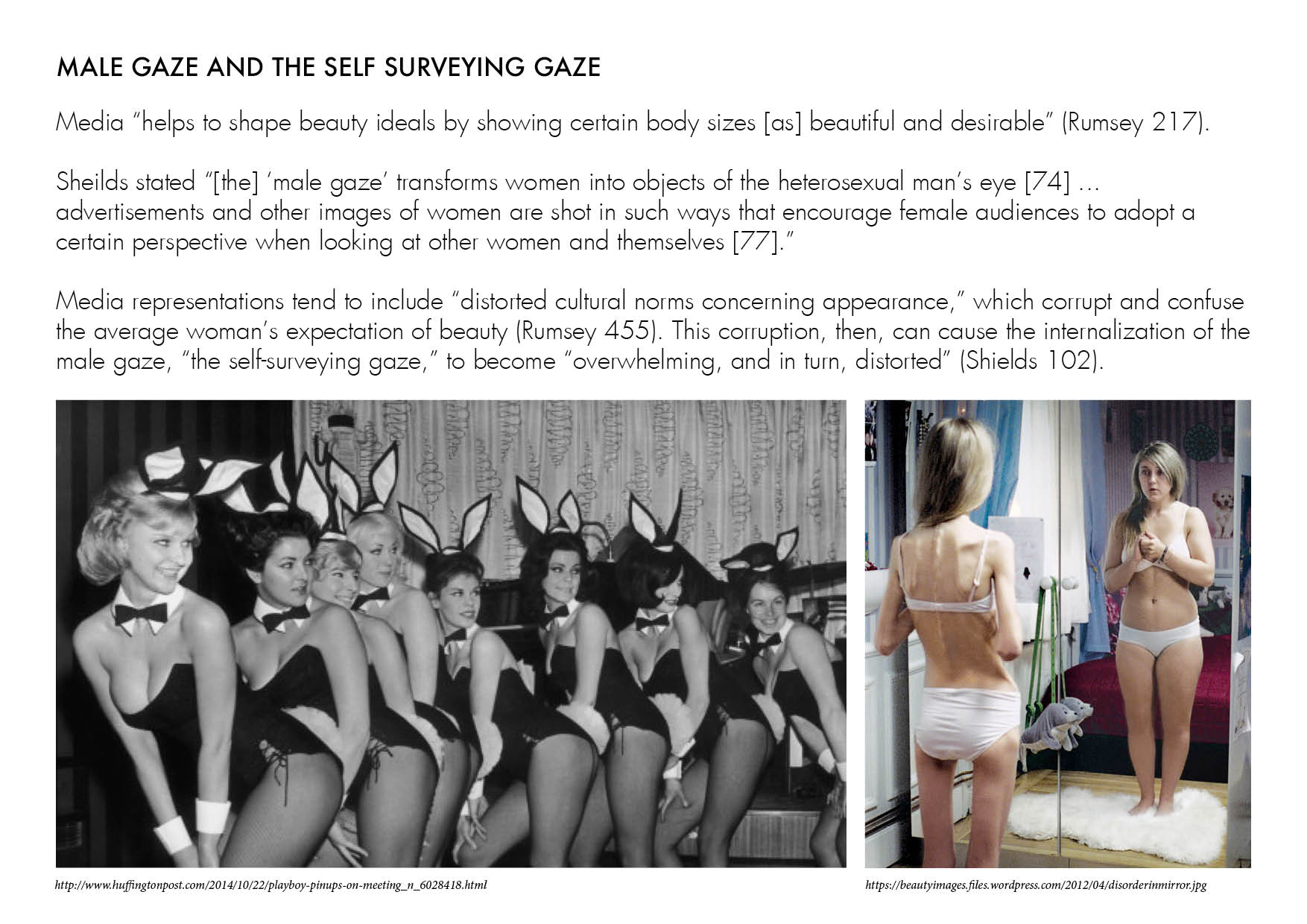 Furthermore, in seeking this approval, the idea of the “Male Gaze” is evident within theory especially from Feminist writers. Rumsey, a theorist, stated that, “Media help us to shape beauty ideas by showing certain body sizes [as] beautiful and desirable”. For example, a photograph of the original 1950’s Playboy Bunnies shows how women knew they were objects of male attention and the male gaze, proudly wearing their corset-based uniforms, in turn becoming the ‘ideal’ and subsequent ‘sex symbols’. At the time, an ‘ideal’ for women to aspire to was, curvy in the right places and this was deemed as ‘perfect’ in the eyes of the media. Various theorists, such as Lacan, Berger, Mulvey, Heinecken and Frekrickson have noted the male gaze in their writings, however I found this particular quote from Shields quite interesting showing how women’s perspectives of themselves can change as a result of doing so –

“[the] ‘male gaze’ transforms women into objects of the heterosexual man’s eye …
advertisements and other images of women are shot in such ways that encourage female audiences to adopt a certain perspective when looking at other women and themselves.”

However, as also noted by Shields, “media representations tend to include cultural norms concerning appearance which corrupt and confuse the expectation of beauty. This corruption, then, can cause the internalization of the male gaze, the self-surveying gaze to become overwhelming, and in turn, distorted”.

This can be shown in the right hand side image, whereby our perceptions of ourselves become distorted, not being able to recognise the ideal nor reality, adding pressures to look a certain way due to this new, internal influence. This image in particular also shows the pressures of modern day, with mixed messages on the ideal through a bombardment of photography and media. Furthermore, this also shows how eating disorders can be triggered through our altered perceptions and beliefs. 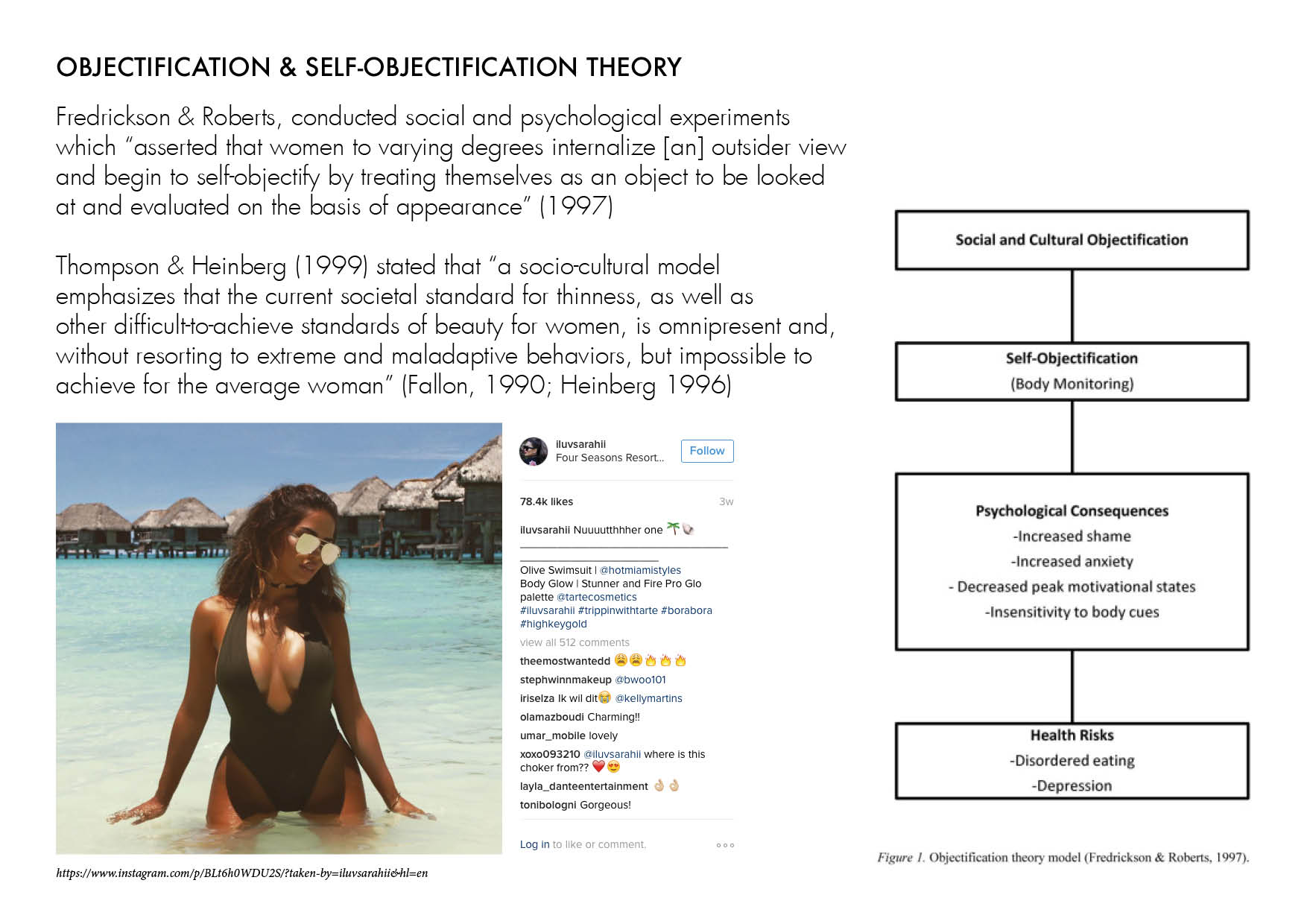 In addition to the the Male Gaze and Self Surveying Gaze theories, Fredrickson and Roberts carried out social and psychological experiments which “asserted that women to varying degrees internalise an outsider view and begin to self-objectify by treating themselves as an object to be looked at and evaluated on the basis of appearance” adding the idea that women may perceive themselves as objects that are there to be looked at and judged accordingly.

Looking at the photograph of Sarah Gonzalaz, a Makeup Artist turned Instagram icon, evidence of this theory can be seen, with Sarah recognising the need to objectify herself as a commodity and marketing tool, knowing what the ‘outsiders’ want to see, internalising this and therefore becoming a walking example of this ideology.

Furthermore, a model was drawn up by Fredrickson and Roberts underpinning this theory, whilst in response two different theorists, Thompson and Heinberg commented on this stating that, “a socio-cultural model emphasizes that the current societal standard for thinness, as well as other difficult-to-achieve standards of beauty for women, is omnipresent and without resorting to extreme and maladaptive behaviours, but impossible to achieve for the average woman” showing how by undergoing such bodily changes in order to objectify oneself to the cultural and societial pre-determined ideals of beauty and physique, one can easily fall into the realms of psychological side-effects and health risks such as eating disorders and depression.

Combined I feel this short overview of key theories, shows how powerful the media can be when regarding our perceptions, of not only ourselves, but others also encouraging change for external pleasures, approval and acceptance.