After reading the thesis by Klein, K (2013) as analysed and discussed on a previous, yet recent post, I wanted to look further into Objectification again, as well as the idea of Self-Objectification. I found both of these theories extremely relevant and resonant with both my current practice and my working research question, looking at how these noted topics can affect our self-perception and sense of body image – not only in regards to Fashion photography, editorials, campaigns and magazines, but also in the context of the Beauty industry and social media. Furthermore, objectification has also been noted in regards to the photography choices chosen for my Kylie Jenner zine, using photographs taken by Terry Richardson in order to highlight how she is being used as a commodity, or object to sell magazines and products for example, whilst also allowing the end-user to consider this in the context of which the photos sit.

Furthermore, I also see this in the sense of an object, and how an object becomes an icon and how an icon can be seen as an object respectively. This is what the Objectification and Self-Objectification theories pose, with Fredrickson and Roberts (1998) stated that, “women’s bodies are looked at, evaluated and always potentially objectified” allowing one to consider that a woman may not actually be seen as a human by some, and just a commodity to evaluate and objectify, allowing for women to “internalise an observer’s perspective as a primary view of their physical selves” suggesting that one may then “monitor” themselves and react to these perspectives, making them “socialised to view and turn themselves in objects”. This is also regarded as “self-perception”.

This is particularly resonant in regards to the current uproar in social media, allowing for one to be constantly judged by others, negatively or positively. Sometimes this can also be sexually, allowing for Sexual-Objectification to be thrown into this theoretical mix. Combined the pressures can allow for negative impacts to arise such as mental health issues, eating disorders and and self-perception issues, with one potentially viewing themselves from a third person perspective, opposed to a first person perspective, tainting their thoughts and therefore actions. This aim to change our bodies due to judgements, perceptions and objectification can alter the way we see ourselves hugely, with ’empirical’ studies showing that “women experience a discrepancy between their actual body and their ideal body” (Fallon & Rozin, 1984).

Examples of this theory being applied and analysed further can be seen in my recent research both in regards to Western Culture and Japanese Cultures, as well as in regards to practical projects, photography used, interviews/documentaries/social media posts and my 2nd Professional Context Presentation. 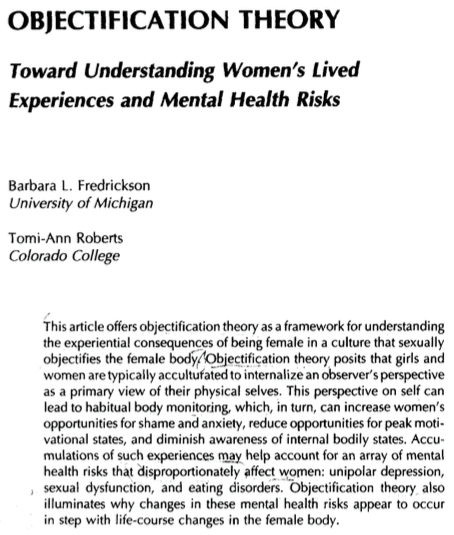 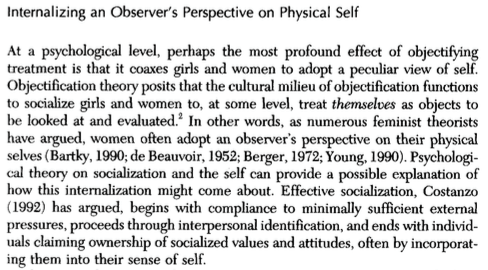 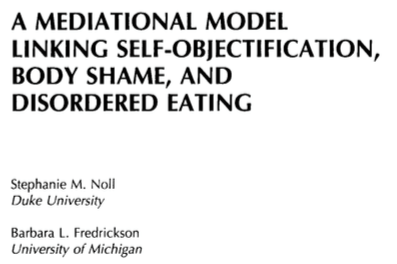 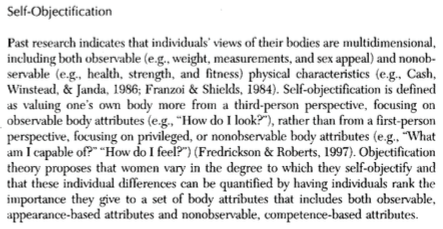 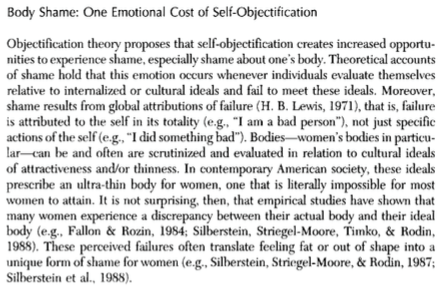