After researching and analysing the Male Gaze theory in relation to my current practice and working research question, I came across the thesis of Klein, K (2013), and came across the “Self-Surveying Gaze Theory” which I wanted to explore and understand further in order to talk about this confidently in my 2nd Professional Context presentation. I found this extract from a book written by Shields and Heinecken (2002) in regards to this theory, which I found particularly interesting. I came across this book via quotes used in Klein, K (2013) thesis’. 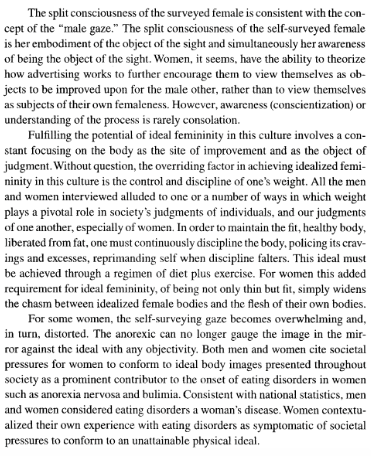 I took from the above extract that the Self-Surveying Gaze acts as counterpart and reaction to the Male Gaze, allowing for at times, one to become overly aware and critical of one’s gaze, going to extremes of fitness or diet for example to negate this into a visualised and socio-culturally accepted ideal, in turn causing mental health issues, negative self-esteem and a distorted sense of one’s self-perception and subsequent self-gaze. I also feel that this is resonant with Lacan’s Mirror Stage theory, allowing for one’s ‘gaze’ to embody their ego shapes through their self-surveying and surveillanced lifestyles and outlook in order to achieve an unrealistic, and in many case an unmaintainable ideal. I feel more now than ever, the Self-surveying Gaze is impacting women, and men alike in many cases more than ever, due to the use of social media, magazines and advertising for example.

It is evident that a range of external factors influence one’s self-perception, however I found that this theory showed how these can become internalised, allowing for one’s self-perception to be self-derived yet from the view of an outsider, due to accepting said external triggers such as advertising, celebrities and bloggers, for example, as well as the opposite sex as previously discussed in relation to theories such as the Male Gaze and Sexual-Objectification. This particular theory has been explored in further depth in a previous post for example, regarding Terry Richardson’s Photography and his ‘subjects’, i.e the ‘icon’ Kylie Jenner whom has had a pivotal role to my experimental works so far being an anchor point for a range of concise relevant subjects.