I decided as part of my FMP and professional context, that I would set up an Instagram account dedicated to my magazine, titled, ‘The Industry’ in order to promote my magazine whilst sharing examples of content to an International audience. In addition, I felt not only may this generate some interest in the magazine, that it would also allow for feedback and demographic data of viewers and followers alike to be collated in order to understand whether my target audience of predominantly females between the ages of 18-24 is accurate, and if not, take on board this feedback and understand the audience better in order to produce relevant content going forwards. In regard to target audience, if the demographic isn’t as expected, this feedback will allow me to understand how to pitch this magazine going forwards and understand which countries are looking at my content in regard to further promotion and potentially stocking the magazine going forwards, and in the future development, post MA of my magazine.

As I am also hoping to show the magazine digitally on a website/blog, this information would also allow me to understand again who to target, as well as understanding which subject topics are best received and take on any feedback which can be implemented to strengthen both the print based publication and the online platform.

In regard to posts, a range of features, quotes and interviews have been posted in series’ of 3 in order to curate the account in a well-thought out and thought provoking manner, whilst also grouping interviews, features and subject matters alike. Each feature or article for example, has been mocked up to showcase how this would look as a magazine spread, whilst also adding a professional and consistent approach to the Instagram feed.

As well as promoting the magazine, the account also promotes my personal practice and interests surrounding the subject matter of my MA, and using hashtags for both the MA Creative Practice course, and hashtags/user tags for each post, a particular audience can be targeted via using relevant search points, i.e. #selfperception #bodyimage #fashionblogger #graphicdesign #magazinedesign #editorialdesign #designer #macreativepractice2017 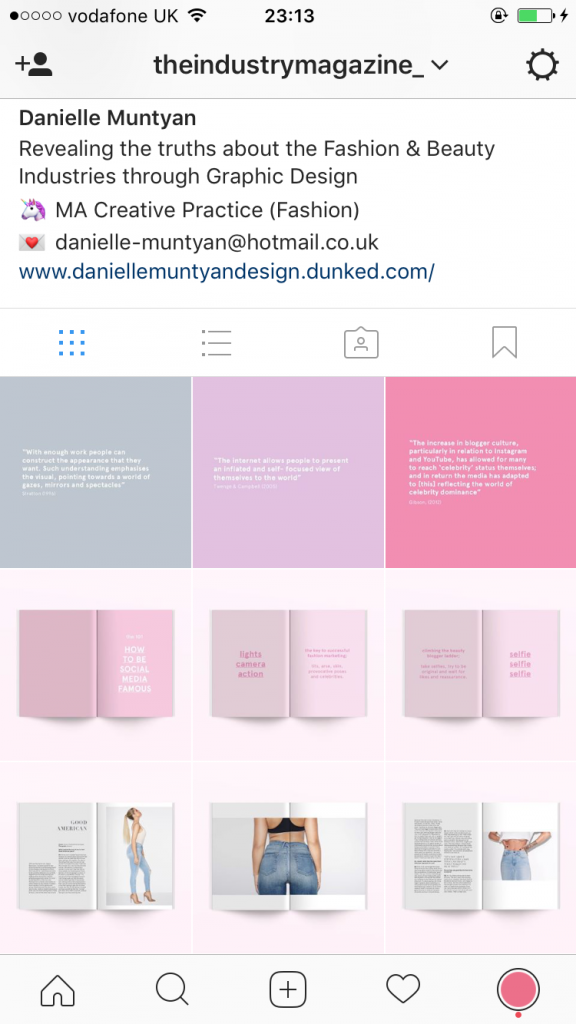