After working on the Badge CAD development, I began to think about other commercial and consumerist based products which I could add to the line of products already being developed and experimented with to date, surrounding this project which has developed quite quickly and dramatically in respect to my original proposal of Instagram Posts and Posters.

As the target audience are those who are actively interested in the beauty industry in particular, buy products and follow trends, I began to think about several cosmetic, gifting products which could be proposed for further development. Each product has been designed to either be used by oneself, or to continue on the motive which the badges and postcards boast – sharing the message with friends. These would be ideal for gifts for friends at Christmas or at Birthdays for example – they share a message, stimulate and provoke thought through the consistent branding and use of theories/ideas for ‘lipstick shades’  whilst also serving a purpose relevant to the industry, topic and consumer.

I chose to develop these based on my past experience as working for a Cosmetic Designer in Industry, and wanted to revisit, exercise and develop my technical CAD skills which are shown below. In addition, by using CAD design it allows for the products to be shown almost realistically in a highly-visual and 3D manner. I particularly like using CAD design to develop cosmetic products and ideas as mocking up these physically can be time consuming and very costly, and also requires the sourcing of unbranded cosmetic products which sourcing at low quantities can be very difficult based on past experiences as MOQs usually start at around 5000 units from suppliers. I wouldn’t want to use a pre-branded container as this would hinder the design and therefore feel in this instance using CADs and product range boards are more appropriate.

A drinks tumbler which are very on-trend and can be bought in shops such as New Look, Primark and Topshop has been designed colour co-ordinating and matching the branding and the colour palette of the cosmetics included in that particular set. Several versions of this have been developed and shown below.

A variety of makeup bags have also been designed, using both the branding drippy lip illustration and catch line, as well as hinting at the shade of lipstick used on the packaging. A slogan has also been used on the other versions of the bags, keeping in line with the drinks tumblers and organically developed project name, “What’s my name again?” mocking the popularity and self-branding of Kylie Jenner in a satirical, humorous way which is relevant and connectable with the end-user. This ‘line’ originally came from the idea that everyone in the world knows her name, therefore losing her identity as a human being and individual and therefore becoming a marketing tool, branded entity and icon whom is known for her looks.

The final product developed is a Lipstick Vault, holding 16 liquid lipsticks all named after relevant theories/ideas as noted above and as also showcased on the posters and postcards, which show each colour as a different shade. The idea behind this is that one receives or uses it becomes aware of the associative sarcastic and satirical names hinting at a very serious problem behind the products they are using at that very moment in time. The packaging has also been reflective and in-line with the other products developed to date. 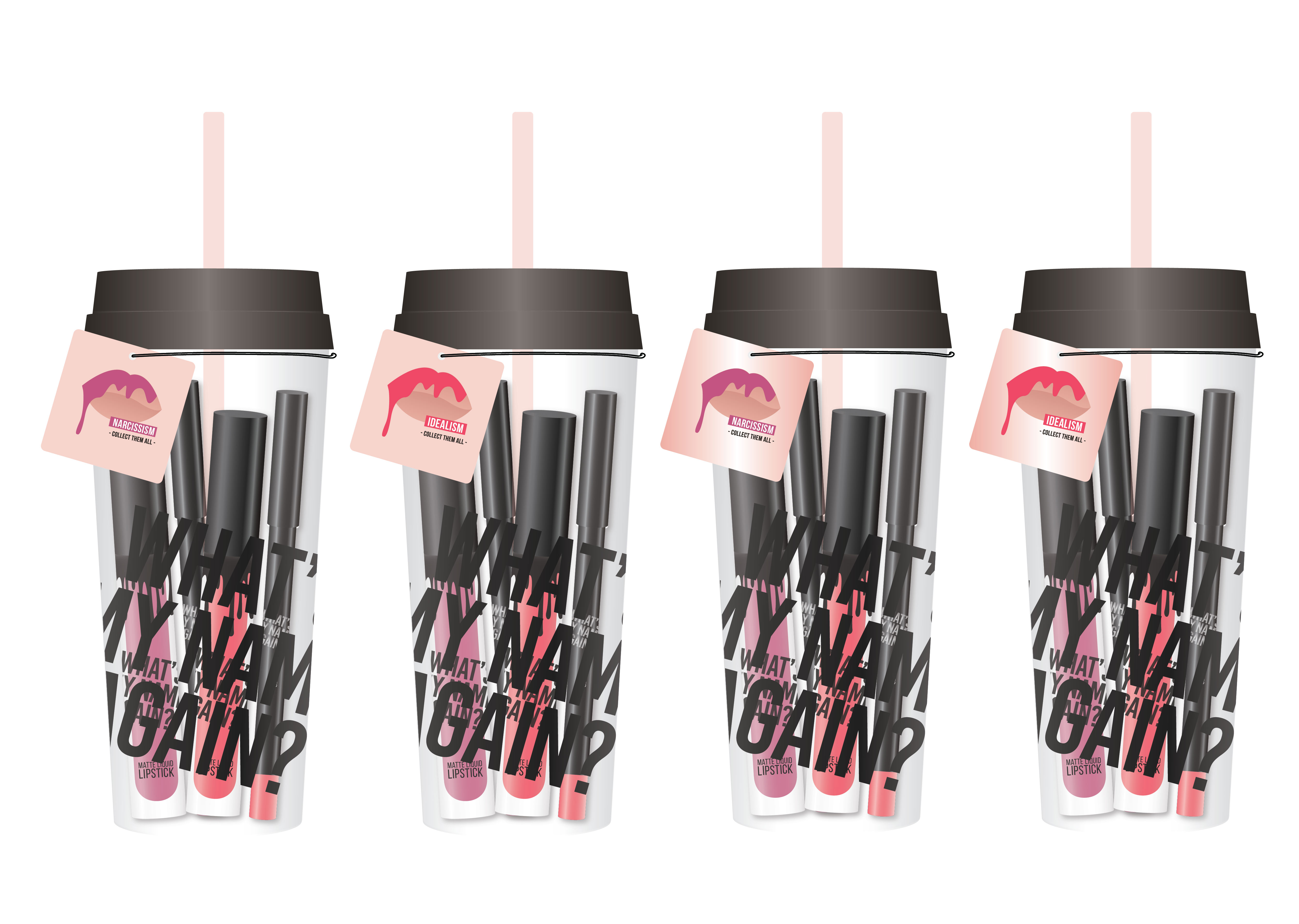 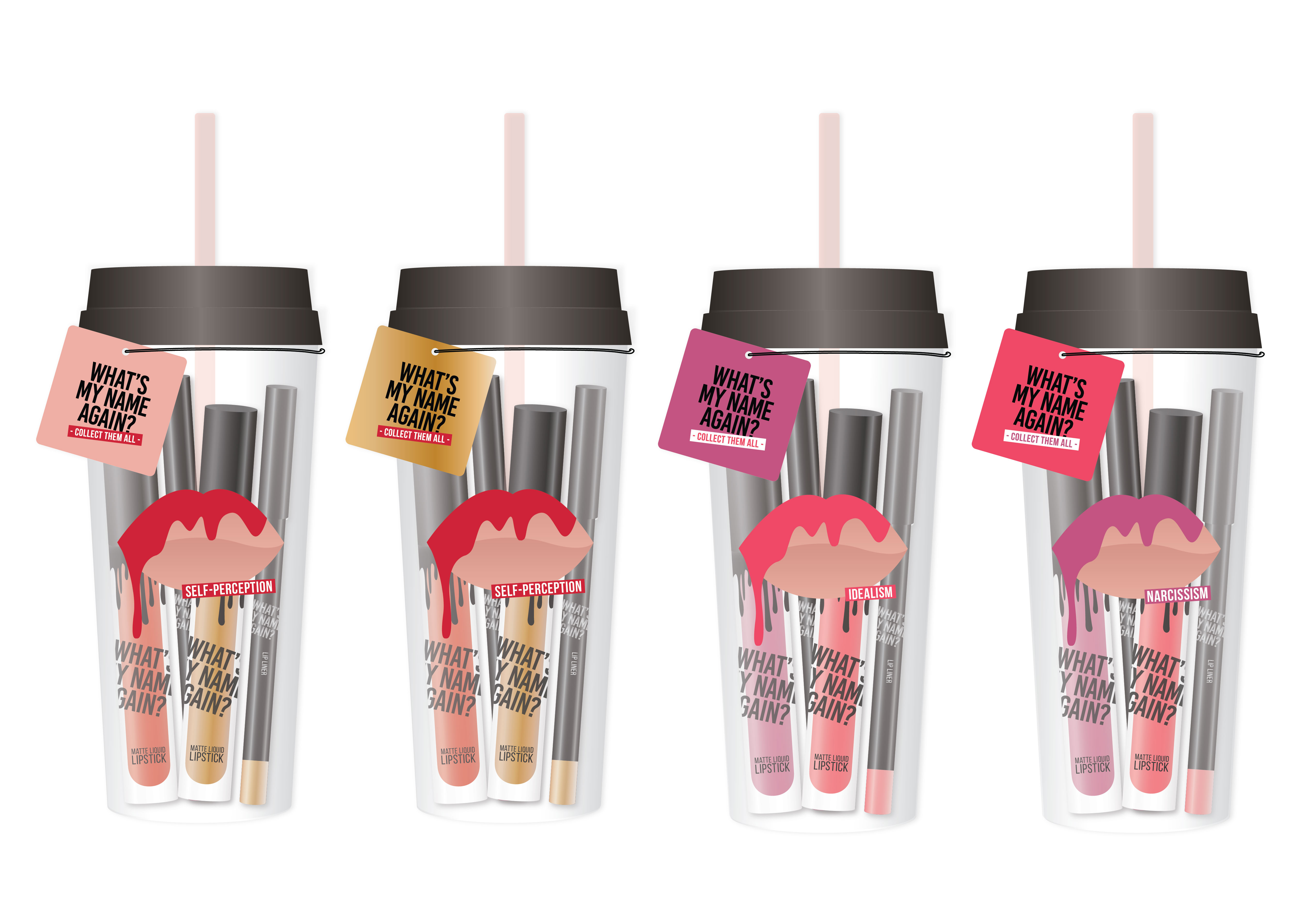 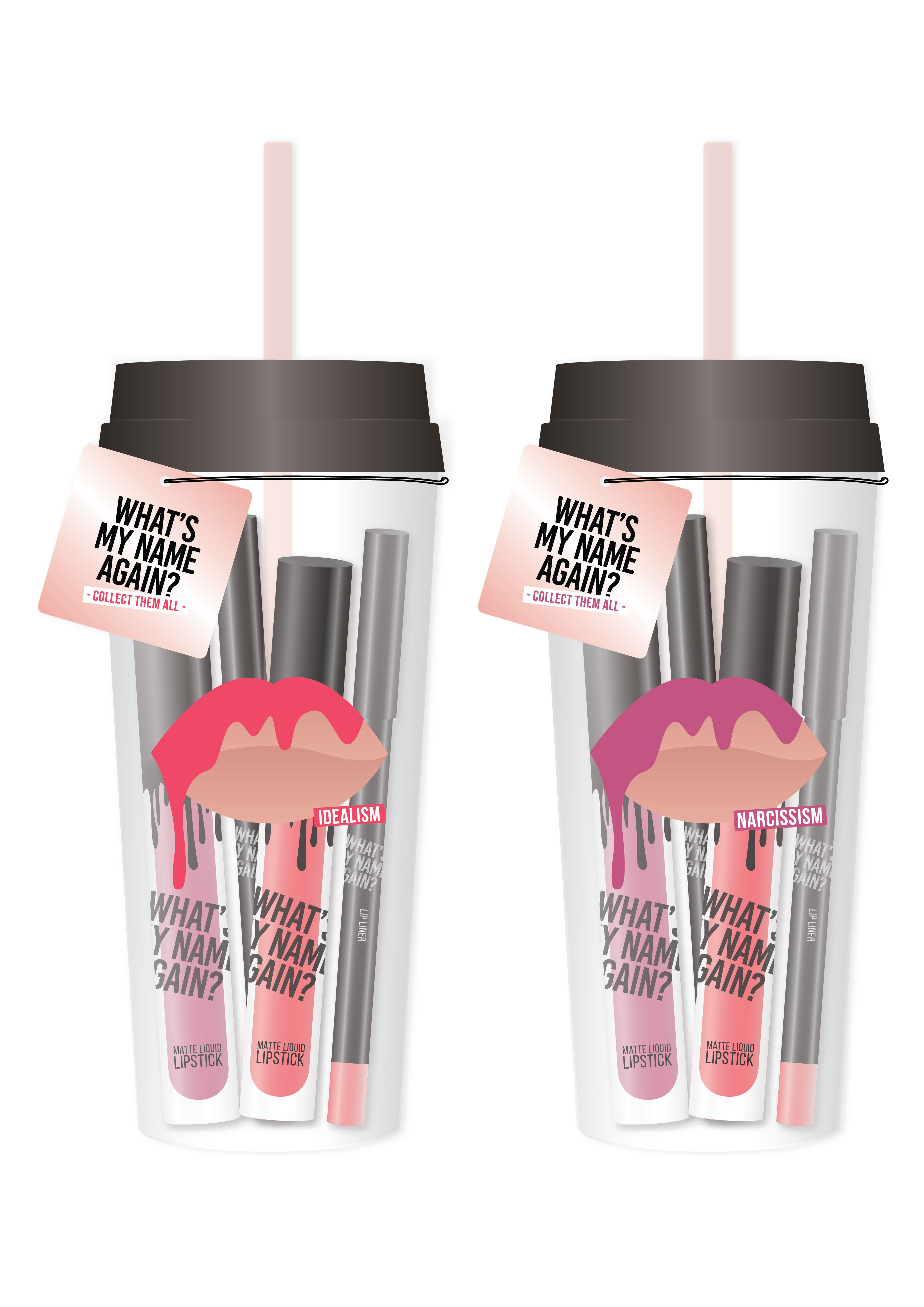 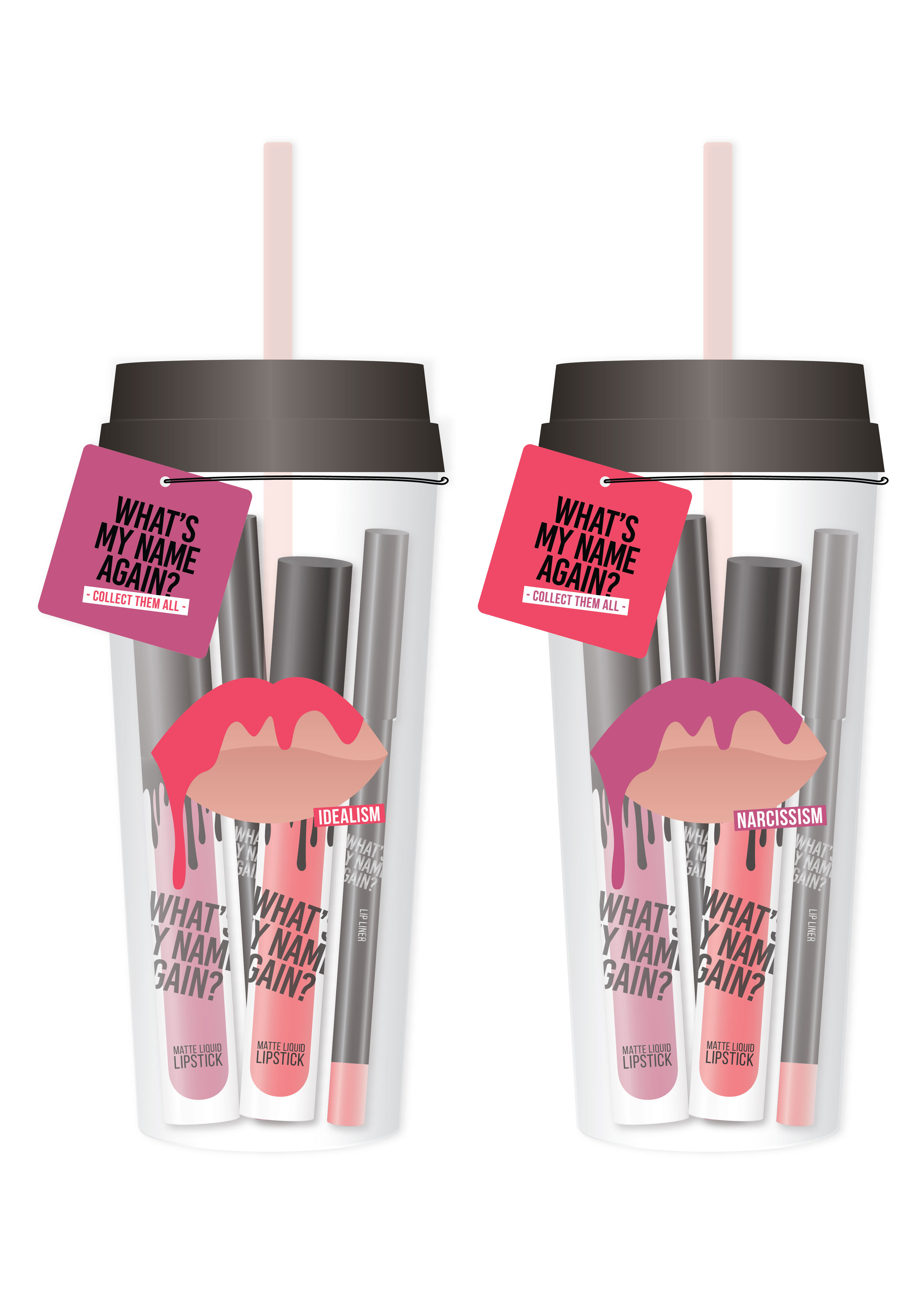 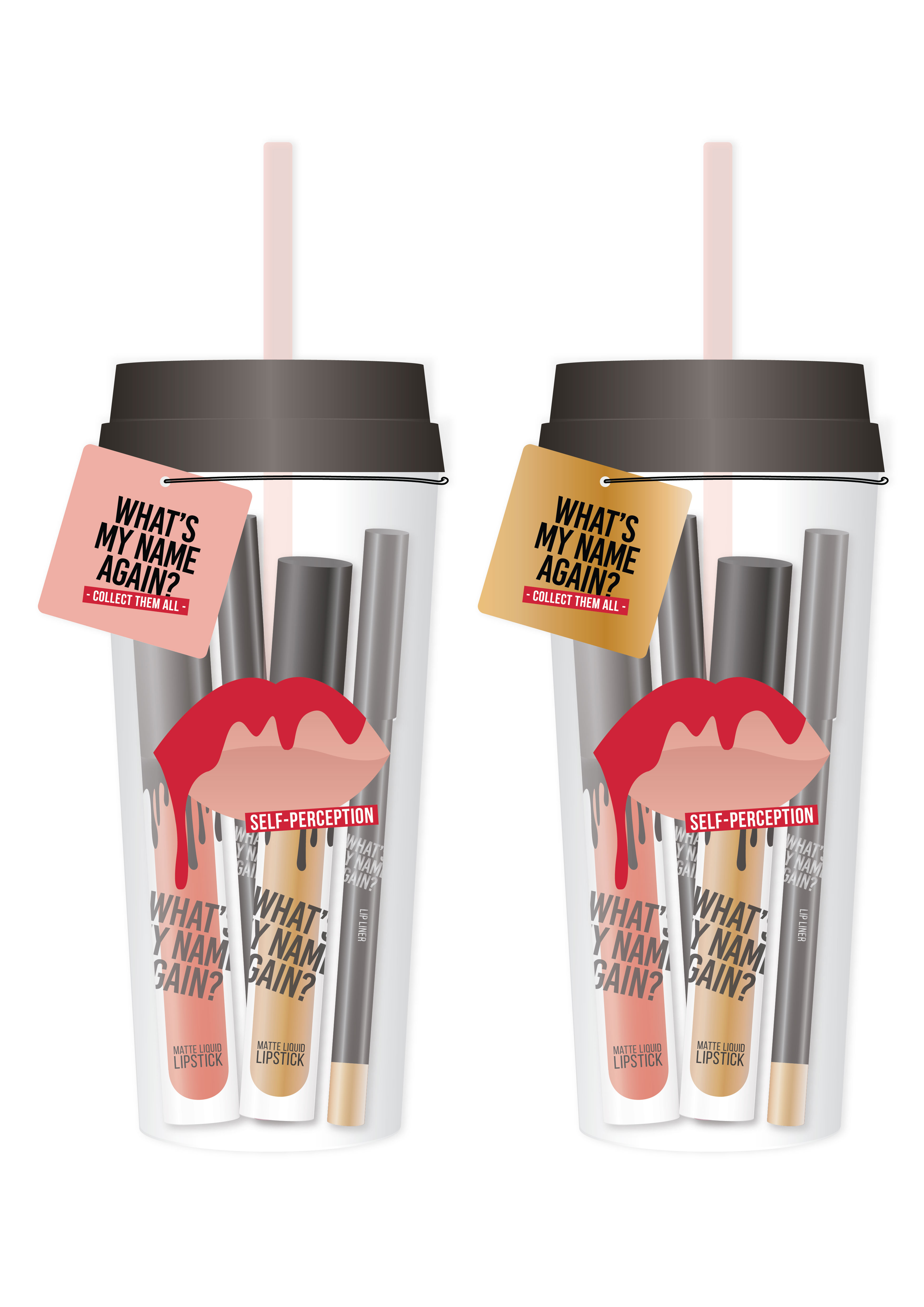 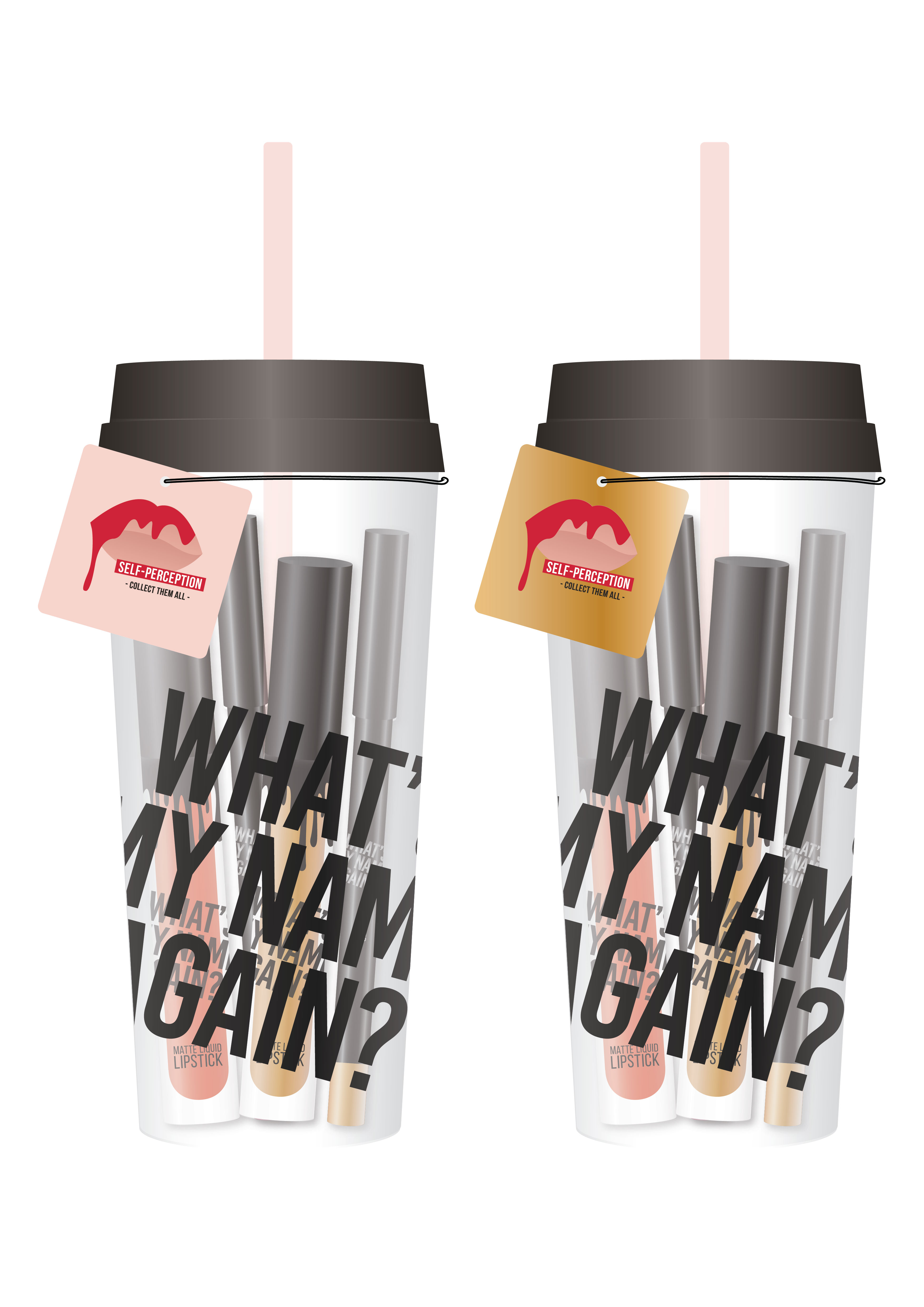 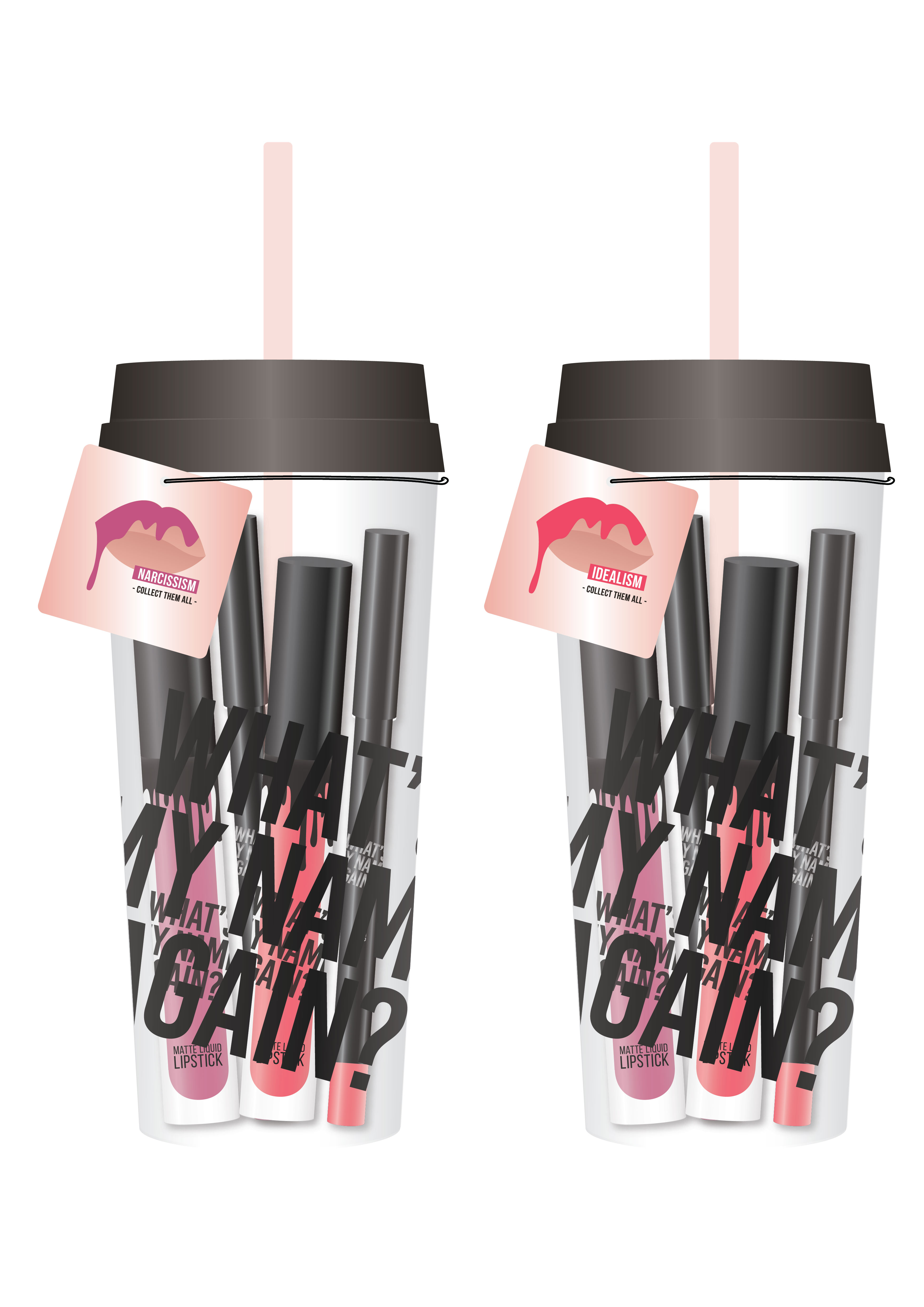 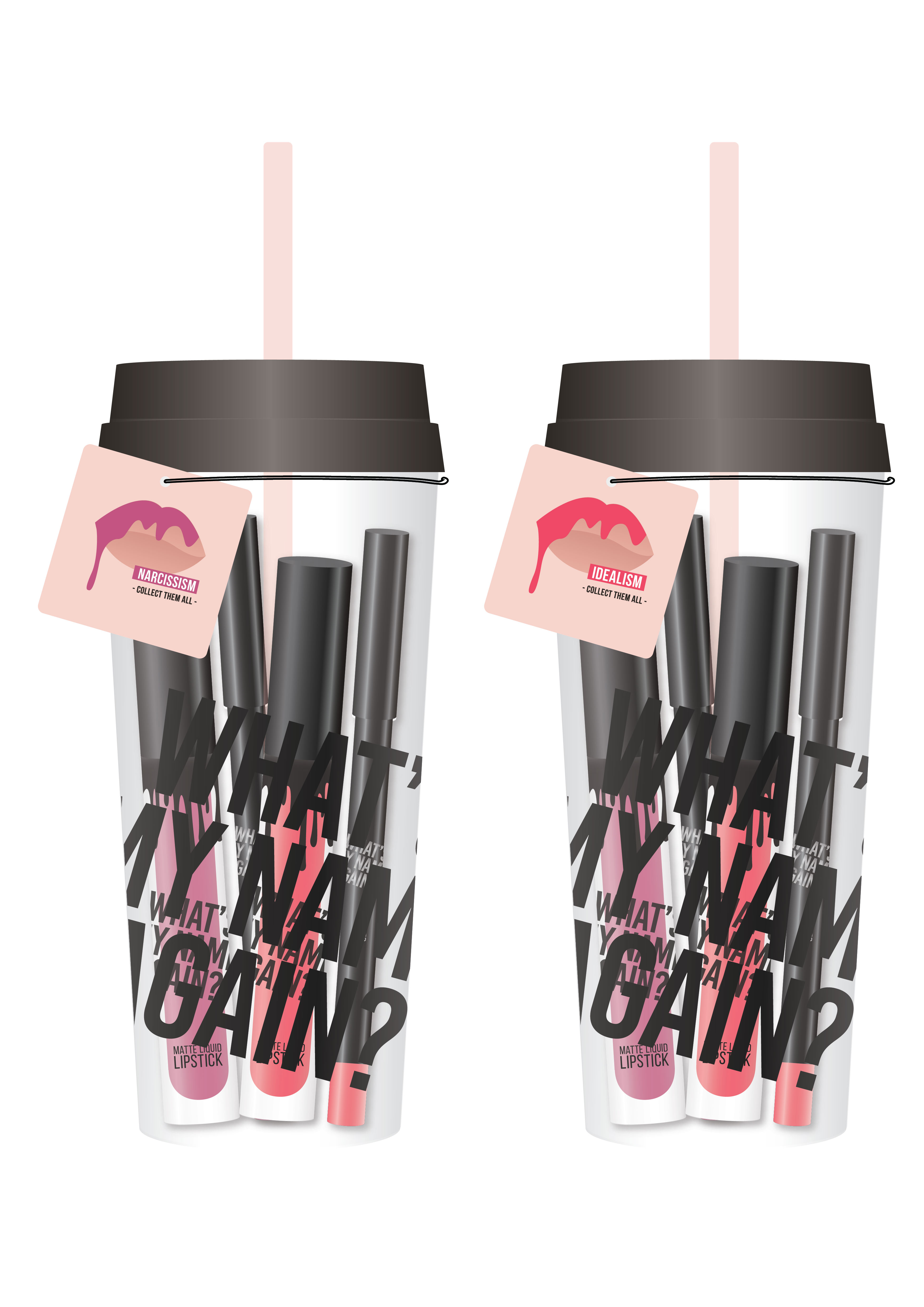 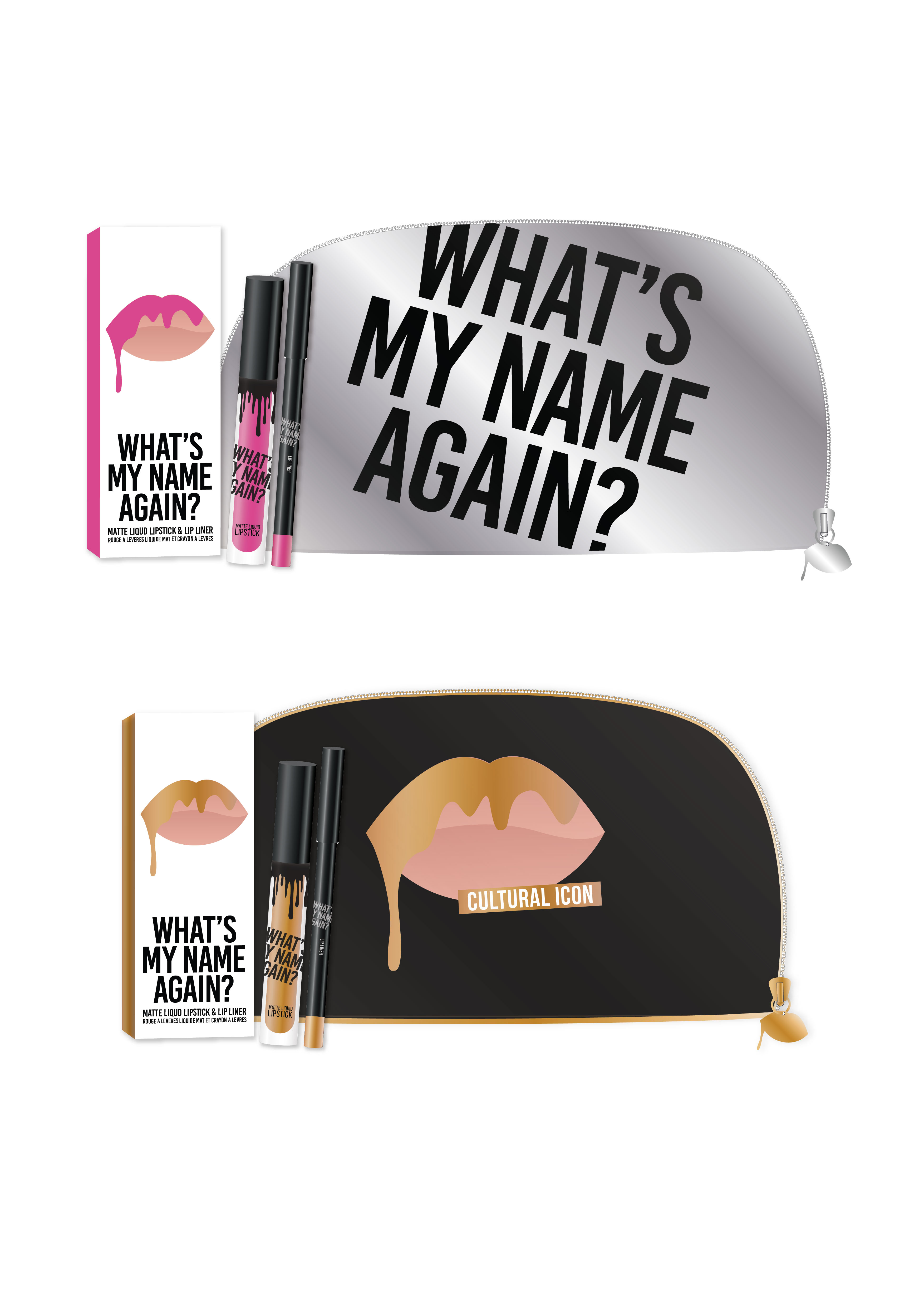 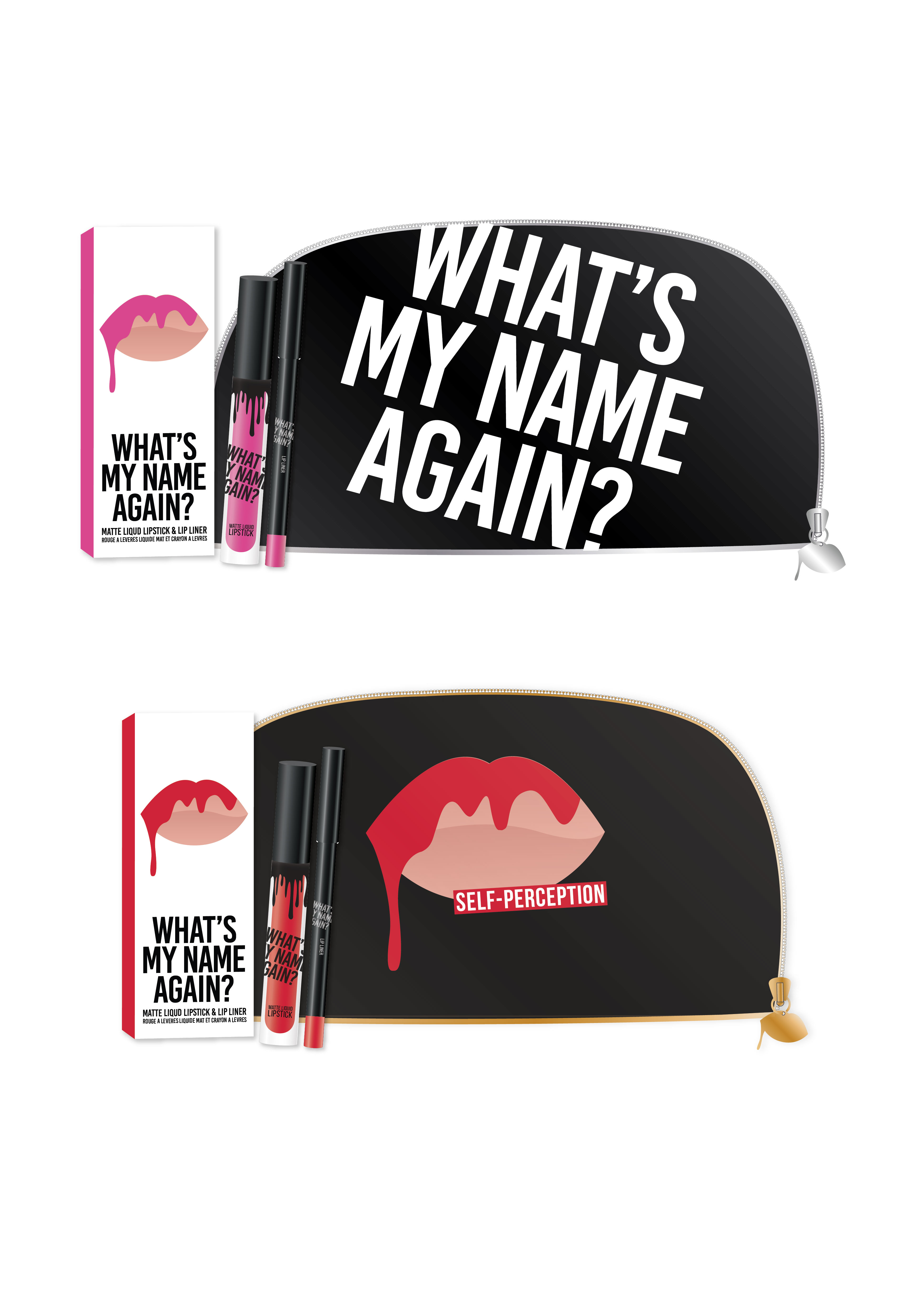 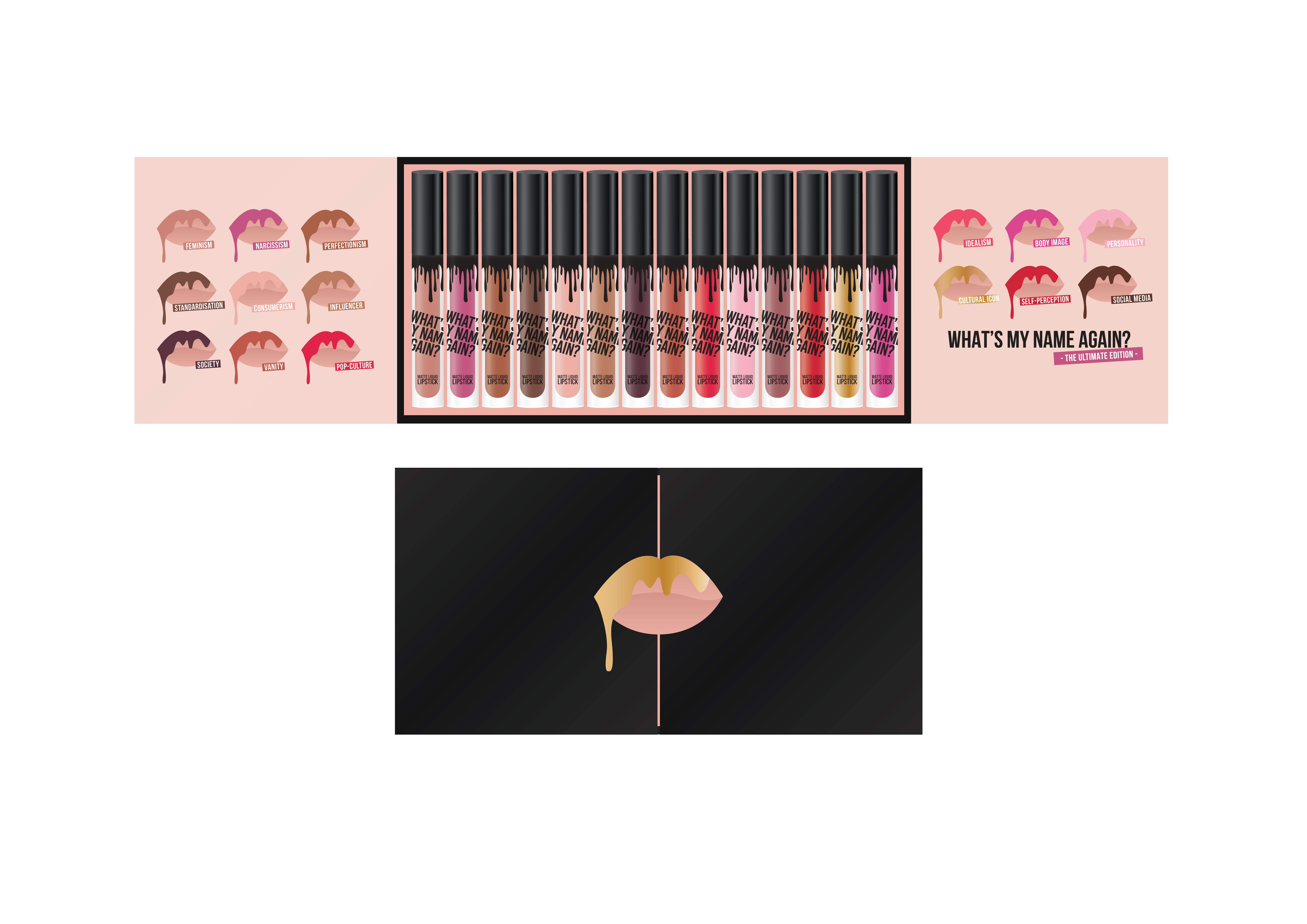 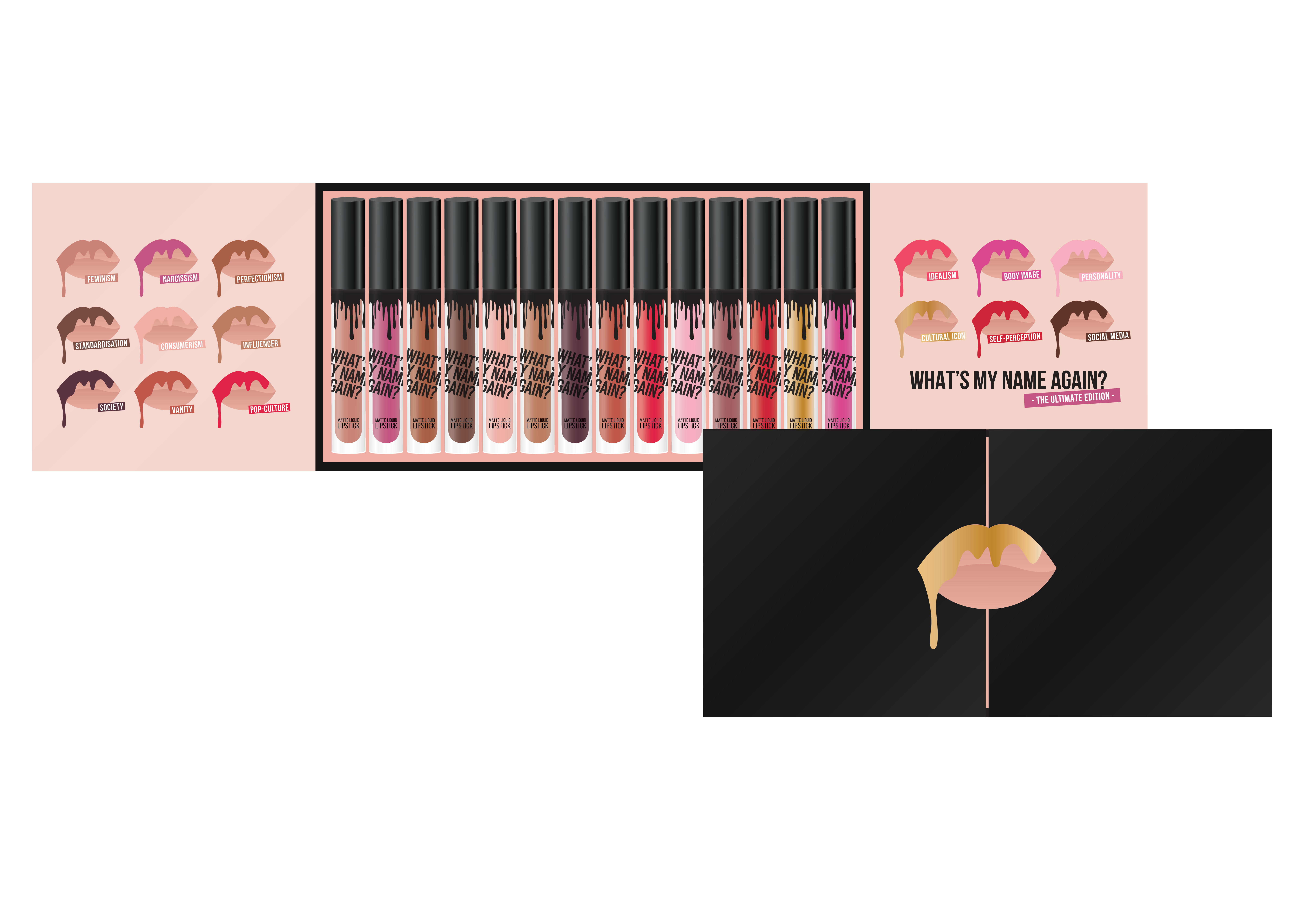