In my previous post, ‘Initial Project Ideas’ I noted that each contained an element of Critical Design, especially the Instagram Posts and Posters which I am currently experimenting with. However, I was told about Dunne and Raby in a tutorial with Anne-Marie, and wanted to see how they carry out work as practitioners, and how this in return relates to my practice.

Critical Design is when “design as a medium to stimulate discussion and debate amongst designers, industry and the public about the social, cultural and ethical implications of existing and emerging technologies.”

Anthony and Fiona, commonly know as Dunne and Raby, are both Professors, Authors and Designers and have worked featured in galleries across the world, such as MoMA in NYC and The Design Museum in London.

What does Critical Design mean?

“Critical Design uses speculative design proposals to challenge narrow assumptions, preconceptions and givens about the role products play in everyday life. It is more of an attitude than anything else, a position rather than a method. There are many people doing this who have never heard of the term critical design and who have their own way of describing what they do. Naming it Critical Design is simply a useful way of making this activity more visible and subject to discussion and debate.” (Dunne and Raby, 2007) 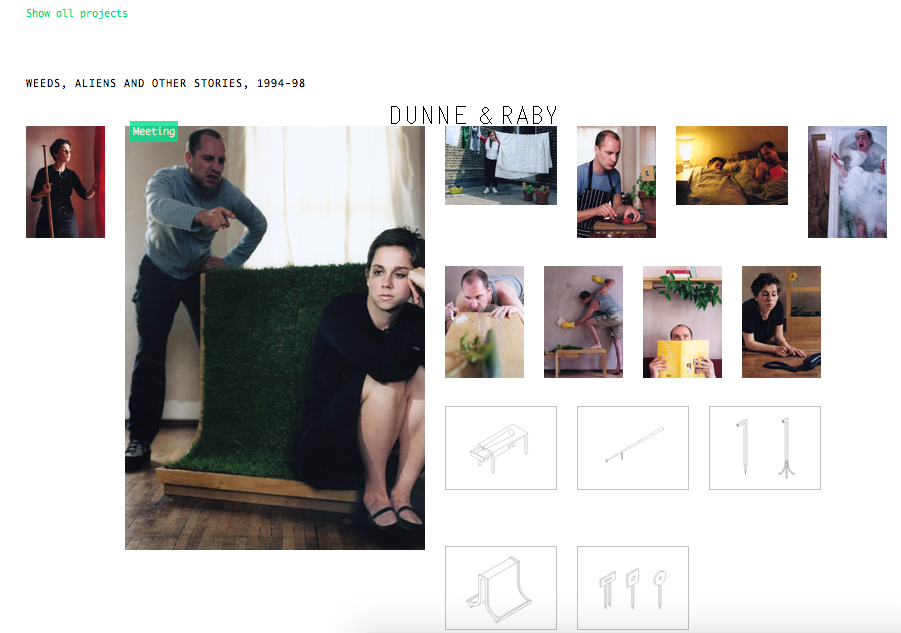 The following extract is taken from: Weeds, Aliens and Other Stories, 1994-98

“Weeds Aliens and Other Stories is a collection of psychological furniture for the home and garden. The project grew out of a deep dissatisfaction with the narrow range of psychological needs met by furniture. How many more chairs, tables and shelving units do we need in the world?

Weeds Aliens and Other Stories began as a sketchbook of drawings and ideas exploring the English obsession with the garden and seemingly irrational relationships between people and their plants. We wanted to encourage people to play out their eccentricities within their urban homes, homes with very little or no garden at all. These unacknowledged behaviours become legitimised through new types of furniture.

The project is in the permanent collection of the Victoria & Albert Museum in London.”

I chose to look at this example being drawn in by the use of photography as this still remains a dominant form of visual within both beauty and fashion industries, be on social media or in magazines and made me think how as well as illustrations and other forms of graphic design, how photography could somehow be used as a Critical Design-led research method in order to spark discussion around the research topic at hand.

It also allowed me to reflect on how even though I have used only illustrations to date, the same concept behind the form of research is prominent similarly to Dunne and Raby’s work in regards to gaining peoples attention in order to make them think, and ultimately engage in discussion or debate. However, I feel now knowing more about their background, their work and methods using forms such as video, photography, installation and sometimes illustration also, I feel I will be able to apply this knowledge going forward to further pieces of work. In addition, the benefit of collaborating with other interdisciplinary artists and creatives is evident allowing for various forms of work to be created including a wide range of conceptual projects and writings, sharing skill sets, ideas and knowledge. This is also something I would like to introduce into my practice in order to generate new ideas and informed conversation.