For my initial screen-printing experiments which make up part of my “Social Media Posts and Poster” Project as noted below, I chose to select this particular post to experiment with.

I wanted to test different colours and inks to see what the best method of print (digital or traditional) is in regards to outcome and commerciality, in order to take a selected few further for development whilst acting as pieces of critical-design led research via engaging with the active target audience mocking preconceived assumptions, expectations and ideas. 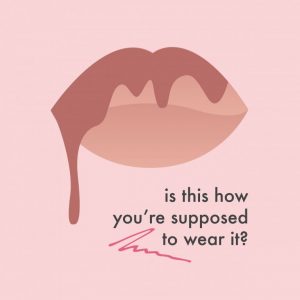 “This post is essentially a satirical, mocking and sarcastic response to the instantly recognisable drippy lip icon which Kylie Jenner uses to symbolise her ‘Lip Kits’. The concept of this was perceiving the packaging design and iconography as how we should use the product without prior knowledge of cosmetics, responding to a world and community where individuals are so guided and influenced by visuals, therefore assuming that everyone is aware of these products, brands and uses.”

Below shows a range of photographs documenting the screen-printing process. The colours chosen initially to work with were Flesh Colour for the Lips, Metallic Gold, Gloss Red and Black. For this, red acrylic paint was mixed with Spot Varnish in order to contrast with the matte lips and typography. The same thought process was behind this with the gold – not only to add a different dimension to the print in regards to the effects produced digitally, but to associate with the “Kylie Cosmetics” and target audience also. 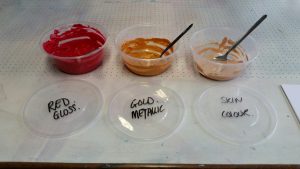 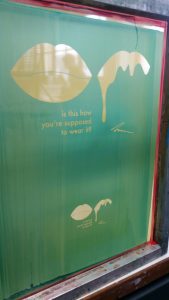 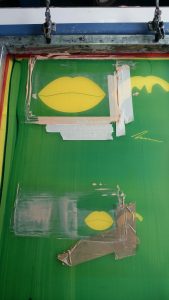 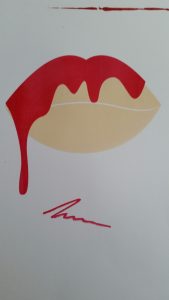 Whilst printing the Red Lips as shown above, I realised that I had not accounted for leakage around the edges of the screen leaving bleed marks as shown above. I also found it quite difficult to align the lipstick drips to the lips as I set-up the print bed with the main print to the back of the screen. I found that I was wasting quite a lot of time and prints trying to sort out the slight miss alignments – also shown above. When I began to set the screen up for the gold prints, I sealed the edges to avoid leakage and bleed, and also set up the print-bed backwards to ensure the print I was working on first was closest to the front. I hoped after spending so much time to resolve the issues printing initially that the gold versions would work out better.

I found by having the print closer to me, I was able to align the remainder of the prints correctly, however the metallic gold ink came out quite transparent allowing for a gold sheen to be applied, opposed to a block of colour. I wasn’t overly keen on how this looks as didn’t feel it was as strong visually as the digital versions. I also felt that the prints as a whole looked very flat due to a lack of background colour or tone within the colours used for the lips for example. 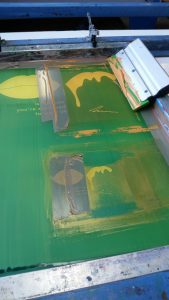 A3 Poster Prints and A6 Postcards were produced as shown below.

I do feel though however that even though the screen-printing process was enjoyable, it may not be the best form of print to take forward throughout my practice and development due to be so time consuming and limiting in regards to the amount of experiments I’d like to carry out surrounding this particular Social Media Post and Poster project.

In comparison to the breadth and amount of work, effects and variety which can be achieved digitally in the same time, I found with my ideas for on-going posts it makes more sense visually and logically to continue producing digital varieties. I also feel that I can produce more impactful results digitally, and furthermore I can target the ‘digital age’ of active social media users, via digital posts, which I feel will be very beneficial in regards to targeting the right audience and receiving the right feedback through my critical-design led posts.

In addition, the variety of posts which I have ‘posted’ on Instagram over the past week would not all allow for easy translatable designs which could be screen printed to the same ‘glossy’ effect, as I have included and shown to date through variety of CAD designs. 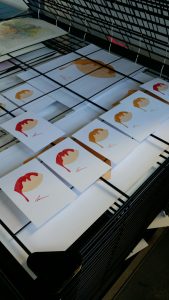 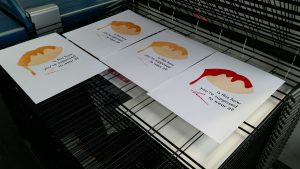 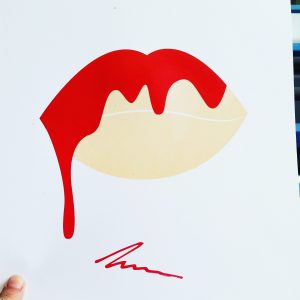 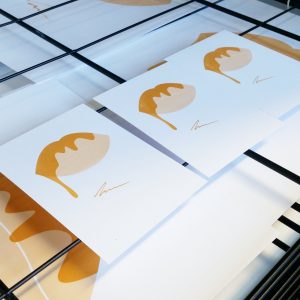 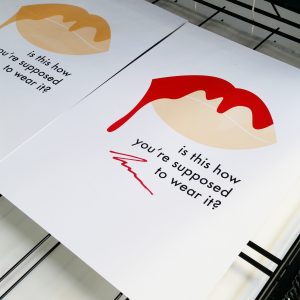 Taking this onwards, I am hoping to work digitally producing a further range of experimental prints and posts which can feed into both the Poster Project and also the zine, which again I feel by working digitally will be more in tune with the chosen target audience for such projects. I would also like to continue working with a critical-design approach.