This is working towards objective 4.A and 1.

Following up on my previous post showing the initial posts I had shared on Instagram from the past couple of weeks, I wanted to follow this up with the most recent set of posts.

In addition to sharing these digital posts, I have also been sharing the screen-printing experiments via my Instagram platform to engage active members of the target audience to connect, comment or like in order for me to gain further insight to analyse over time, whilst also seeing which aesthetic my target audience prefer, allowing for this to be applied going forwards in order to gain the largest reach to share the message and findings of my research questions. 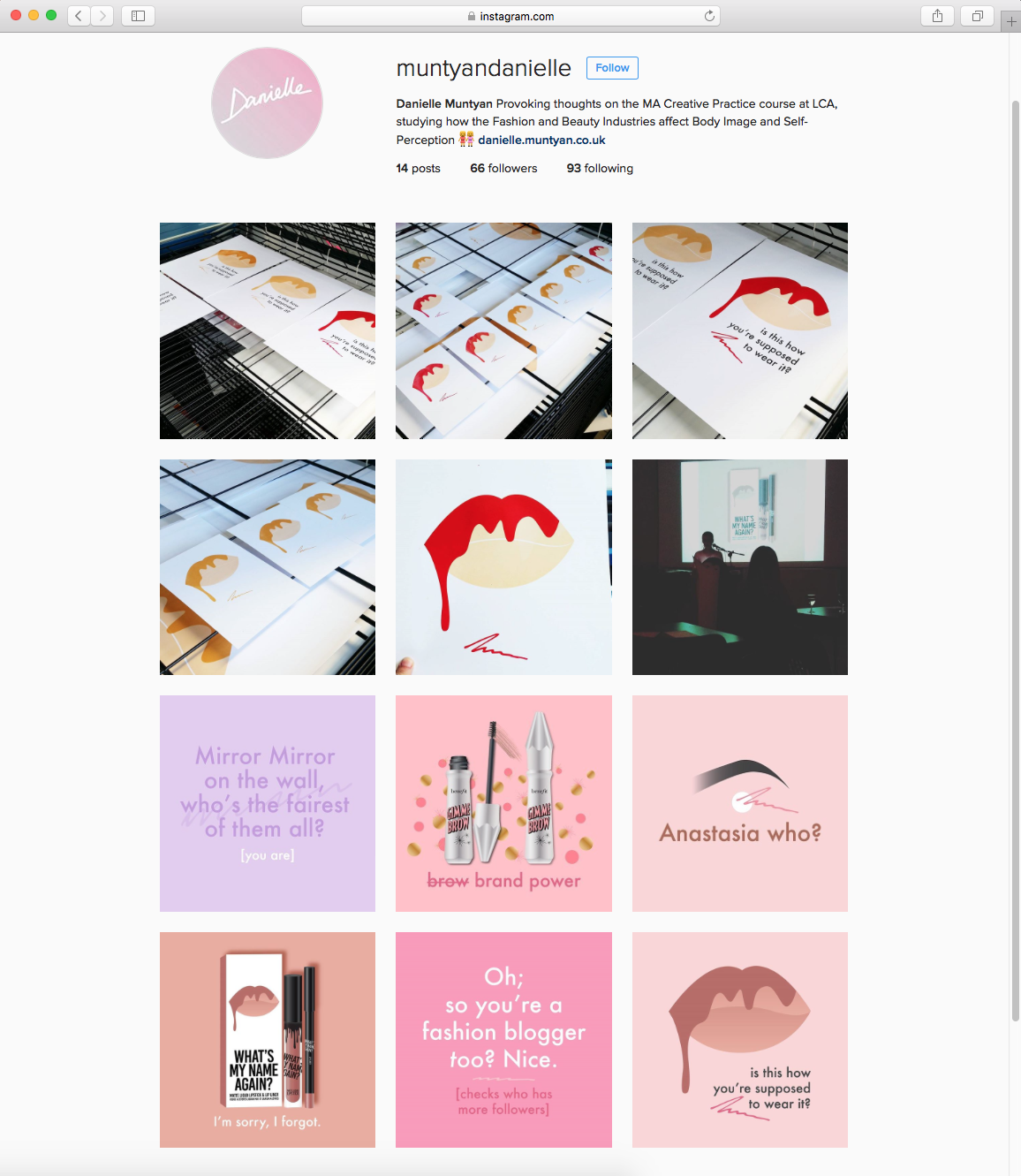 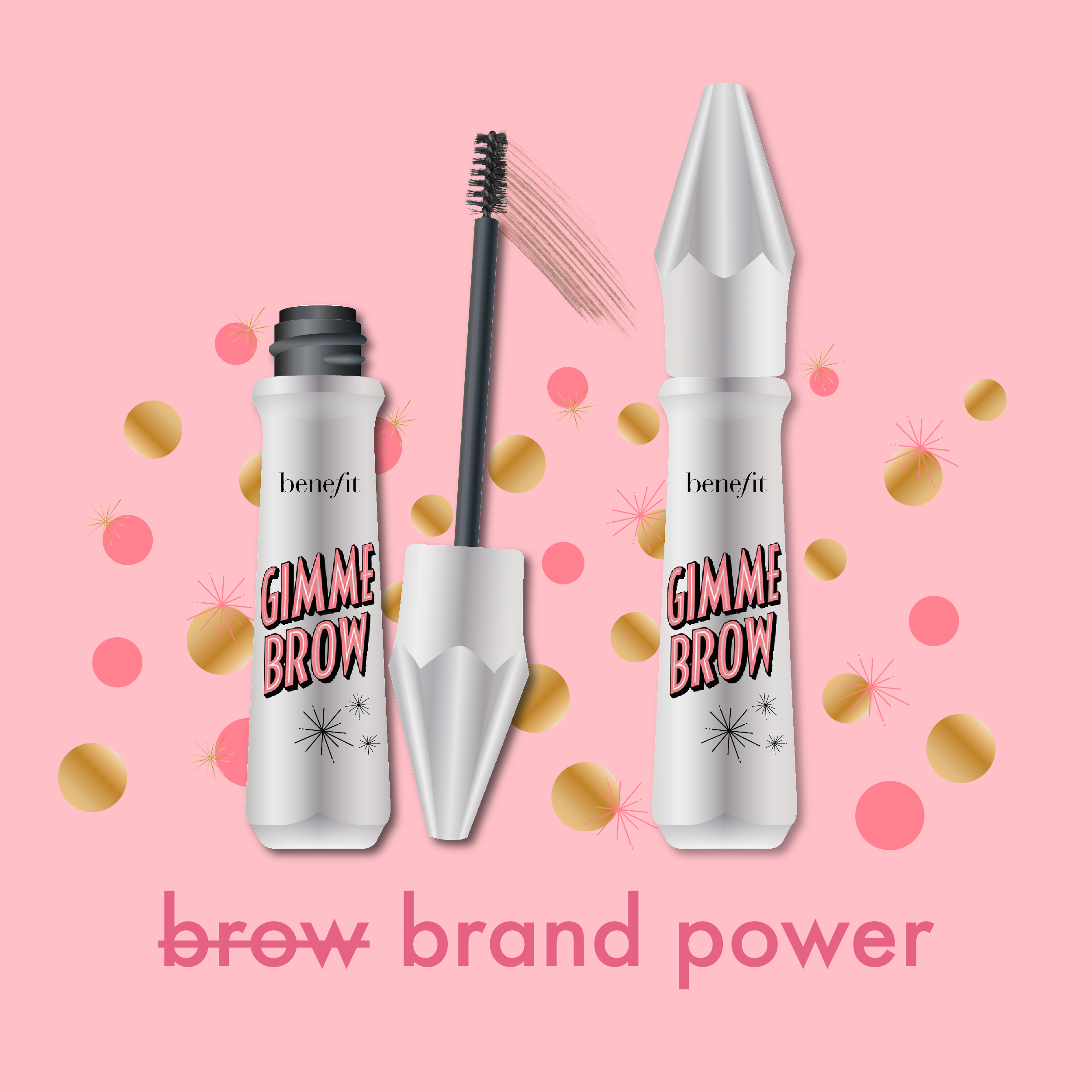 The caption for this particular post was: “When society tells you how to be, how to look, how to be as a person.. brands reinforce their power, redesign their packaging to sell those ideas” enforcing that ideas of brand culture, the power of advertising and also the power of packaging design which is becoming much more important in the saturated beauty market in order to make both new and existing products stand out.

With the boom of the ‘brow trend’, brands have very quickly caught on to this trend and engagement and have since very quickly released new and existing products as part of a new range to entice even more individuals into the cosmetics world, showing their power, and also highlighting the sheepishness of the consumer market.

This particular post has been designed using digital illustration in order to gain a recognisable and realistic CAD design opposed to being a flat vector, contrasting some of my previous posts slightly, whilst also being re creations of real products allowing for brand specific messaged to be relayed. 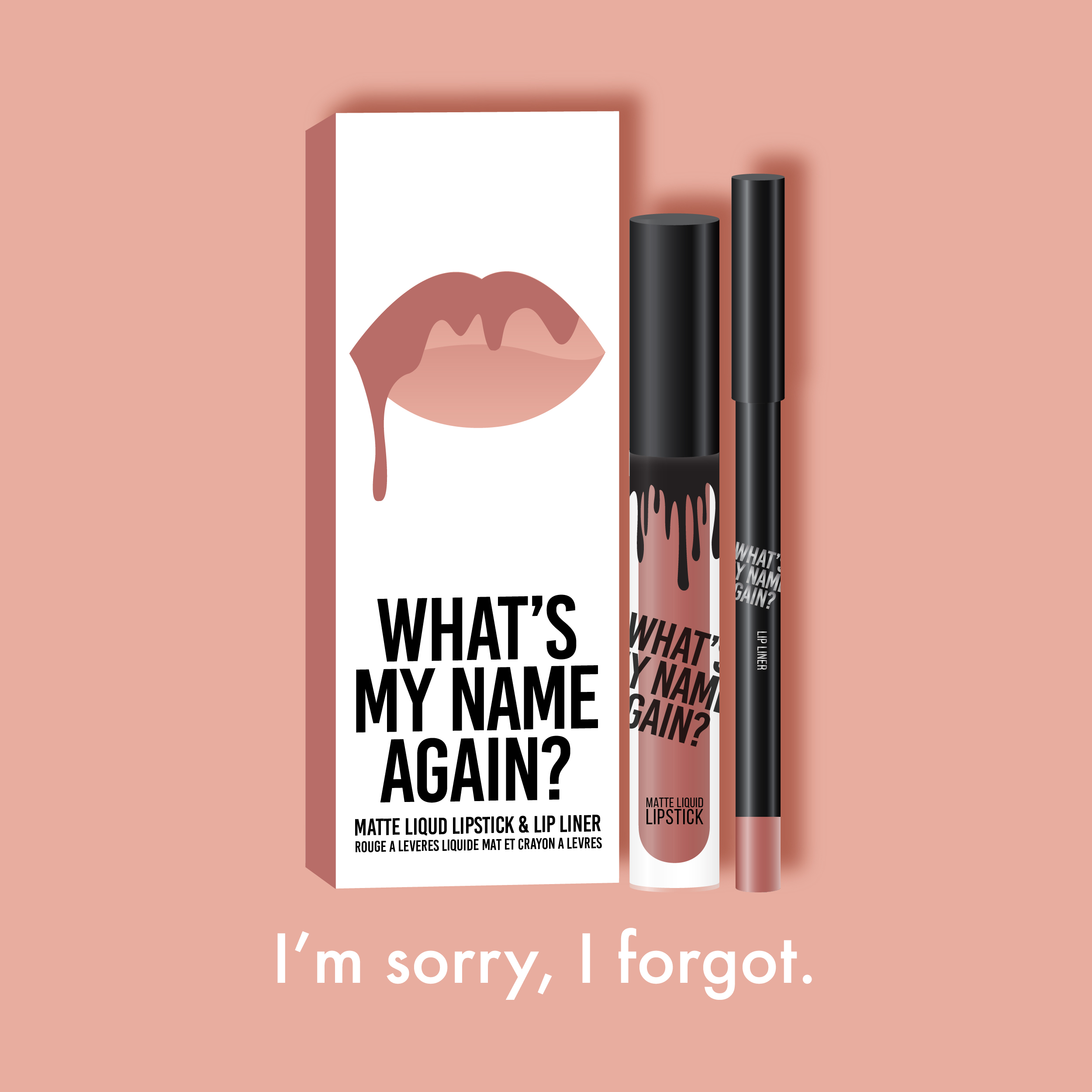 This post, again echoes what has been noted above, whilst also adding another post related to the ‘Kylie Cosmetics’ range as also noted through a previous design. Again using a CAD style of illustration and a tongue-in-chic tone of voice, Kylie Jenner’s Lip Kits have been re-drawn showcasing how synonymous her name is with her products, logo, and packaging. ‘Bebas Neue’ is the font which Kylie Cosmetics uses for both branding and packaging design and therefore has also been used allowing for instant recognisability and visual connection with the viewer.

The product name however has been changed to “WHAT’S MY NAME AGAIN?” being inspired by the cultural icon of Kylie Jenner and the idea that when you become so famous and so recognisable you lose your identity and become a commodity. I feel this is extremely resonant with Jenner reaching out into the cosmetics market, and dominating it via social media platform Instagram, therefore being natural to include it in this exploratory project. 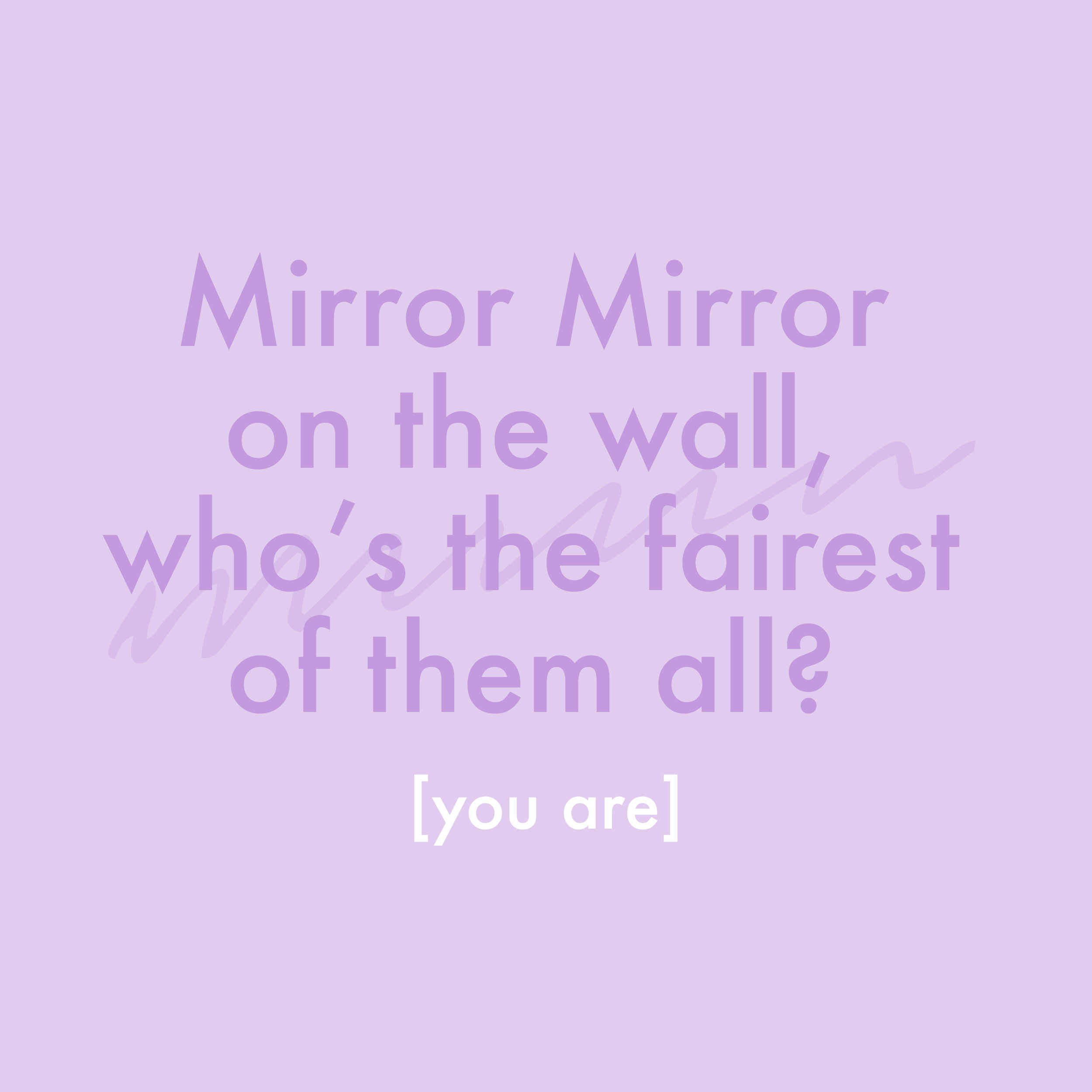 The post above was tagged with the caption, “How many of you would say that about yourselves when you look in the mirror? You are beautiful. Have confidence and forget what the media tells you to look like”, in order to showcase the importance of vanity in the digital age, and to also empower women to believe in themselves and spark thought about the way that they perceive themselves.

This post features simply typography, and a subtle illustration allowing for a further visual link between posts. Typography has been used in such solitary format in order to relay a message in a way whereby the viewer is instantly impacted by the question they are faced, provoking thought.

Below shows the above posts in context. I have also shown some comments which I received in regards to feedback, as well as the hashtags used to engage with the Instagram community which I am currently trailing and testing out to see what gives the best reach and engagement. Positive feedback also allows me to see that the subject matter and visuals are being received well and having a positive impact, which also affirming the idea of critical-design as used by Dunne and Raby (2007) allowing for such posts to mock assumptions and preconceptions of how one is told to look and be by the media, therefore highlighting such issue in an indirect way. 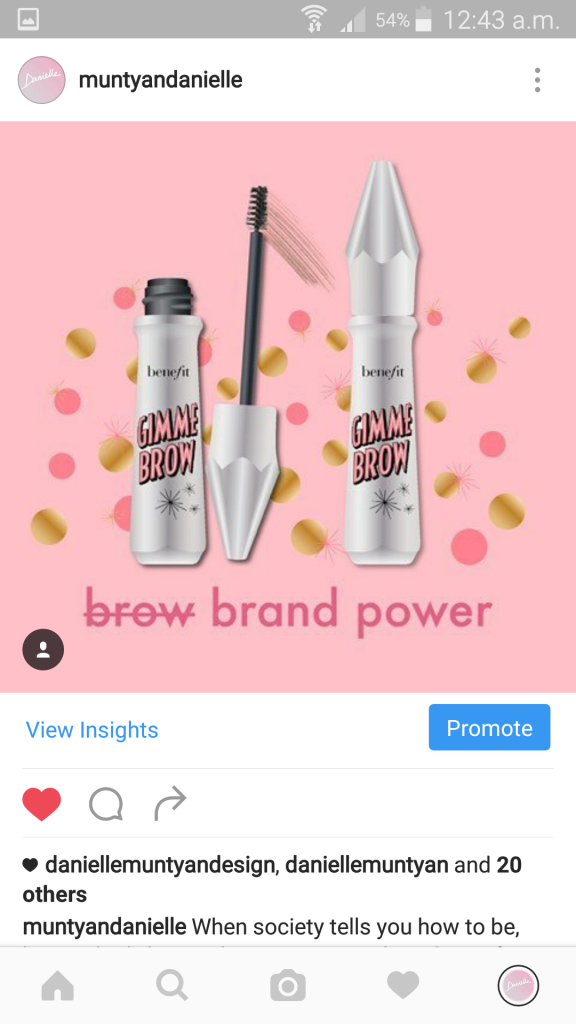 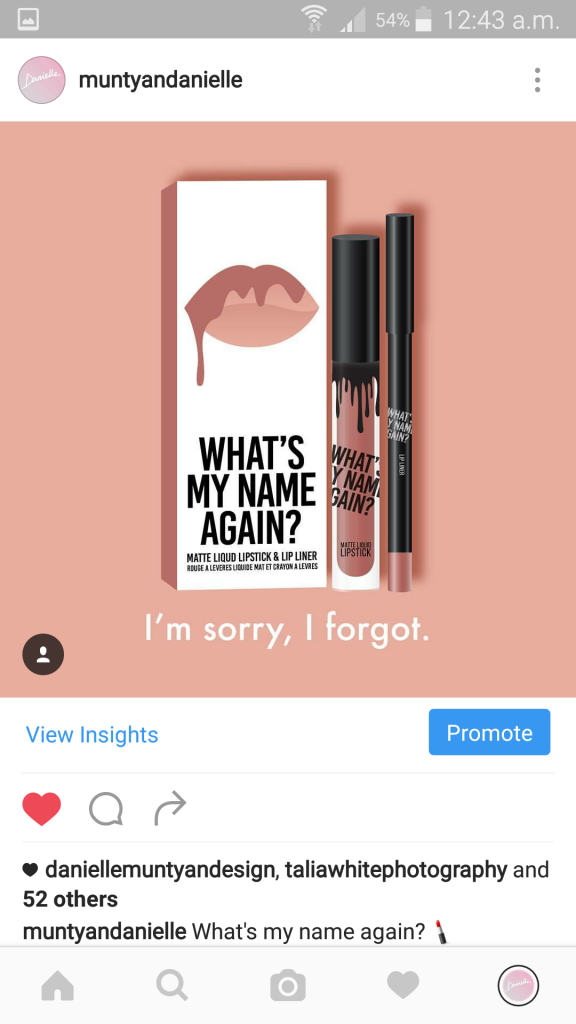 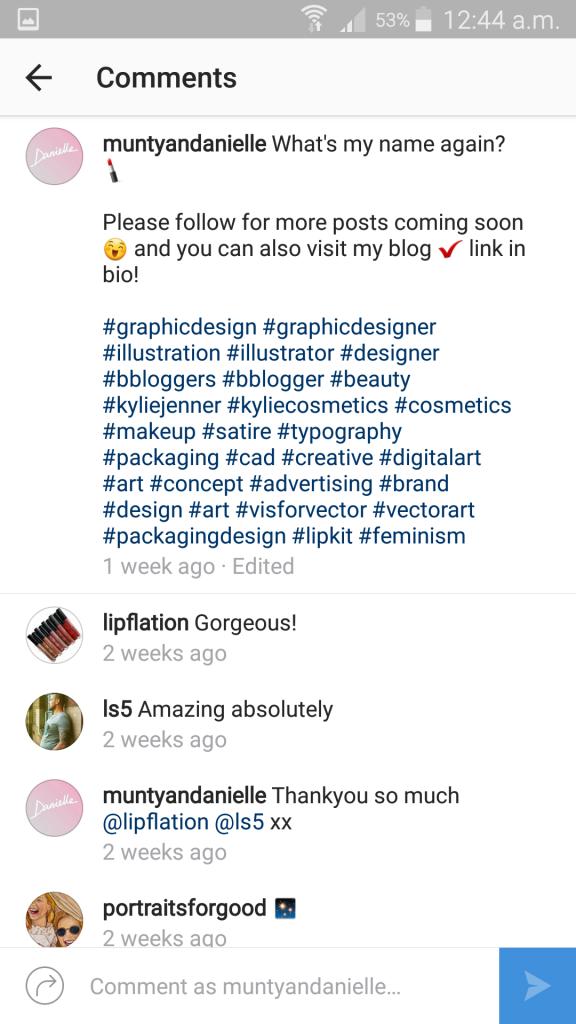 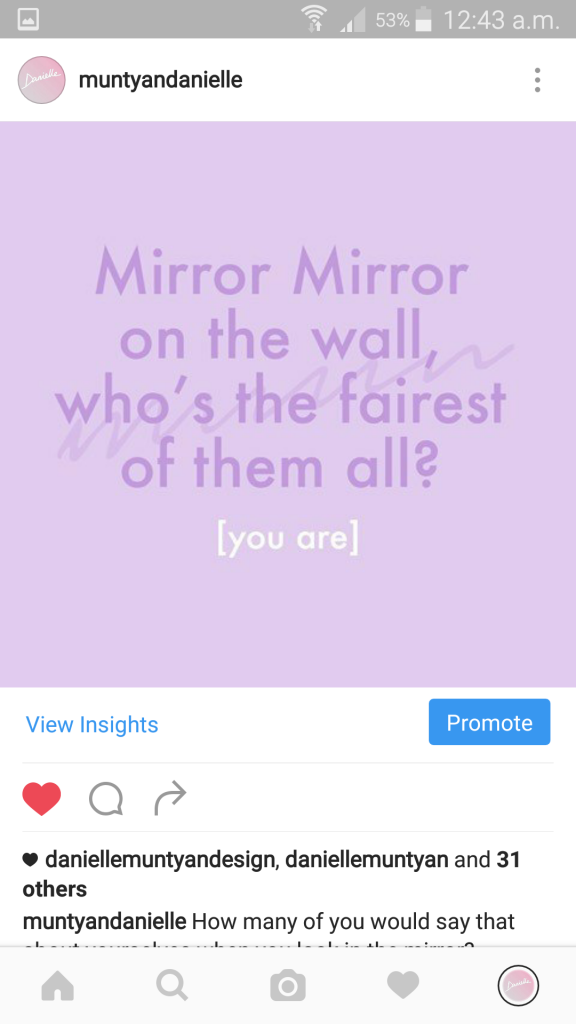