It is noted by some such as Rizzoli, that Kim Kardashian is the “trailblazer” and almost icon of the “selfie movement” which we are currently living within the rise of digital technologies and social media. Therefore, I have noted two books, ‘Selish’ by Kim Kardashian and ‘Capture Your Style’ by Fashion Blogger/Vlogger Aimee Song. Both represent this movement and the power of it, and therefore direct how to do it well in order to turn “an Instagram hobby into a successful business” as Song notes in a manner which would make any active and engaging Instagram users believe that it is also possible for them also with the right ‘look’ and image. Not only that but Song actively encourages her readers and followers to carefully edit their photographs to achieve the perfect addition to their carefully curated Instagram feed. This can also be seen in a video below. I found the video very interesting in the sense that Aimee is very controlling in the way others take photos of her, ensuring she is perceived in a particular, and controlled way therefore obviously being very aware of her body image and self-perception, especially in regards to what angles are used to take ‘the best photos’. This confirms how obsessive this form of photography, where by through taking our own photos – selfies – or directing the shoots of our own portraits, we are in full control in a narcissistic sense of what we are showing the public.

I have also noted these two books in my initial plan for my Professional Context presentation, looking at how these cultural, blogger and celebrity influences are impacting on our body image through their use of social media. 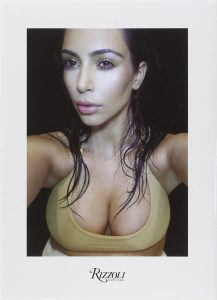 “The selfie photography of Kim Kardashian West, featuring many never-before-seen personal images from one of the most recognizable and iconic celebrities in the world. From her early beginnings as a wardrobe stylist, Kim Kardashian West has catapulted herself into becoming one of the most recognizable celebrities in Hollywood. Hailed by many (including Givenchy designer Riccardo Tisci) as the modern-day personification of Marilyn Monroe, Kim has become a true American icon. With her curvaceous style, successful reality TV show Keeping Up with the Kardashians, DASH clothing store, makeup and perfume lines, she has acquired a massive fan following in the multi-millions. Through social media (Instagram, Twitter, and Facebook), Kim connects with her fans on a daily basis, sharing details of her life with her selfie photography. Widely regarded as a trailblazer of the “selfie movement”—a modern-day self-portrait of the digital age—Kim has mastered the art of taking flattering and highly personal photos of oneself. For the first time in print, this book presents some of Kim’s favorite selfies in one volume—from her favorite throwback images to current ultra-sexy glam shots—and provides readers with a behind-the-scenes look into this larger-than-life star.”
– Rizzoli

Noted Reviews:
“The first lady of #fame – the 100 Most Influential People” –Time Magazine

“Kim Kardashian already broke the internet. Now she’s poised to break the best-seller lists. . . . It’s easy to mock – indeed, the title almost does it for you – but this seemingly throw-away collection may end up being just as much a part of pop-art history as when Andy Warhol painted soup cans.” –Daily News

“Kim Kardashian is the queen of selfies, and she’s planning to make sure everyone knows it in her upcoming book, Selfish.” –MTV News

“Now there’s a book cover if we’ve ever seen one! . . . this book is obviously made for her biggest fans. Not to mention it includes previously unseen selfies!” –USA Today

“Kim Kardashian can take a selfie anywhere, and we mean anywhere!” –E! News

“In her new coffee-table book, Selfish, the reality star documents nine years of her life in selfies – some seen by millions, others revealed for the first time.” –Harper’s Bazaar

“Now you can get between the covers with her— hardcovers, that is. With more than 400 pages of intimate snaps (including bikini selfies, lingerie selfies and, yes, several nude selfies), flipping through her new photo book Selfish, published by art-house giant Rizzoli, feels like scrolling through a fabulously rich and beautiful friend’s well-curated smartphone.” –Playboy Magazine

“As they say, you have to love yourself first! After months of anticipation (and just a touch of eye-rolling), Kim Kardashian’s selfie-filled coffee table book, aptly entitled Kim Kardashian’s Selfish, [has] finally arrive[d].” –US Weekly

“Kim Kardashian has joined the ranks of Giacometti, da Vinci, Lichtenstein, O’Keeffe, and just about every other revered artist of any era: she, too, now has a Rizzoli-published book devoted to her work at the forefront of an artistic movement. Indeed, Rizolli notes that she’s ‘widely regarded as a trailblazer of the ‘selfie movement.’” –Flavorwire.com

“[Kim K’s] the queen of the selfie. And her soon-to-be released hardcover book . . . should be all the evidence she’ll need to maintain that throne.” –CR Fashion Book

“As it stands, Kim Kardashian West holds the title for most Instagram followers (at 30 million) just behind the platform’s own account (at 60 million). An average Kim K selfie garners upwards of 650,000 likes with her wedding photo receiving 2.5 million likes. With all that in mind, there’s no question that Kim’s controversial new book, Selfie, is going to fly off the shelves.” –V Magazine

“From her favorite throwback images to current ultra-sexy glam shots, Selfish will provide readers with a behind-the-scenes look into Kardashian’s life.” –In Style Magazine 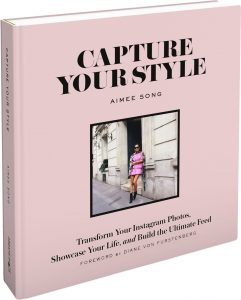 “Oh. My. Gosh. You guys, I can’t believe it’s finally time to tell you this… I wrote a book! I’ve been blogging for about eight years now and in that time I’ve gotten to go all around the world to the most beautiful destinations and attend events I dreamed of when I was younger. A huge part of those experiences and my success as an influencer has been documenting them on Instagram. That’s what this book is all about–how to showcase your life through beautiful photos on Instagram.

Why should you want it? Instagram is so much more than a platform for pretty pictures. It’s the fastest-growing social media network with an engaged community, a major marketing tool for brands, a place where Beyoncé drops her albums, and a hub where products can be bought with a simple double tap. Including everything from fashion, travel, food, décor, and more, I’m giving you insider tips on curating a gorgeous feed and growing an audience.

Inside, you’ll learn ways to craft your voice and story on Instagram: all about how to edit your photos using the best apps and filters, how to prop and style food and fashion photos, how to gain more followers, and secrets behind building a top Instagram brand, transforming an Instagram hobby into a successful business.”
– Aimee Song, Song of Style