This is working towards objective 1 and 4.

In support of my research and prototyping work to date surrounding the ideas of Instagram and blogger culture, I wanted to support this further with literature on such rise in phenomenon, as I feel as though I have looked at this subject matter more theoretically and practically, to date opposed to in regards of literature. Blogging culture has encompassed topics discussed throughout my Instagram Post project using a critical-design theory approach to stimulating opinions and provoking thoughts based on assumptions of the industry.

I feel that the texts and information shown below evidence the rise in blogging culture within the fashion and beauty industries, hence why choosing such subject matter to be discussed.

The following extracts of literature taken from ‘Fashion and Celebrity Culture’ by Gibson, F (2012), summarises how bloggers have now almost gained celebrity status in some cases, and in return the media has “adapted to [this] and reflect the world of celebrity dominance” (p.126). In addition, it is noted that, “in an era of endlessly circulating images of young women, largely presented directly to and looked at by other young women, the traditional theoretical arguments of the ‘the gaze’ (Berger 1972; Mulvey 1975; Doane 1982) are no longer relevant; they depend upon the presented dominance of the male gaze behind a camera” suggesting that the one in charge of critique and judgement has changed to become more broad and general in a sense of men and women – “Mulvey’s original argument that men and women are looked at – while battered by barrage of critique … still stands, albeit with a few bullet holes through it, in the world of fashion [and beauty]” (Edwards, 2010, p.156). This has been seen throughout my research and practical work to date looking at the impacts of social media of those who post the photos causing ‘cheapened experiences’ and competitive behaviour between social groups in order to find their social identity and feel confident with their self-perception. This has also been heavily reflected through my practical work aimed at unravelling Bem’s (1972) self-perception theory in relation to my practice and research question. The idea of judging our self-perception based on third-party views is resonant within blogger culture, relating back to the comments surrounding the gaze noted by Gibson, F (2012) showcasing how these theories are intertwined in regards to Instagram for example, having a International affect and impact upon viewers/followers.

The below also summarises what I have noted throughout my report and research to date in the sense that, the internet and social media allows for instant access for one to be apart of a community, opposed to ‘viewing it’ only as in magazines (Gibson, F, 2012, P.135). 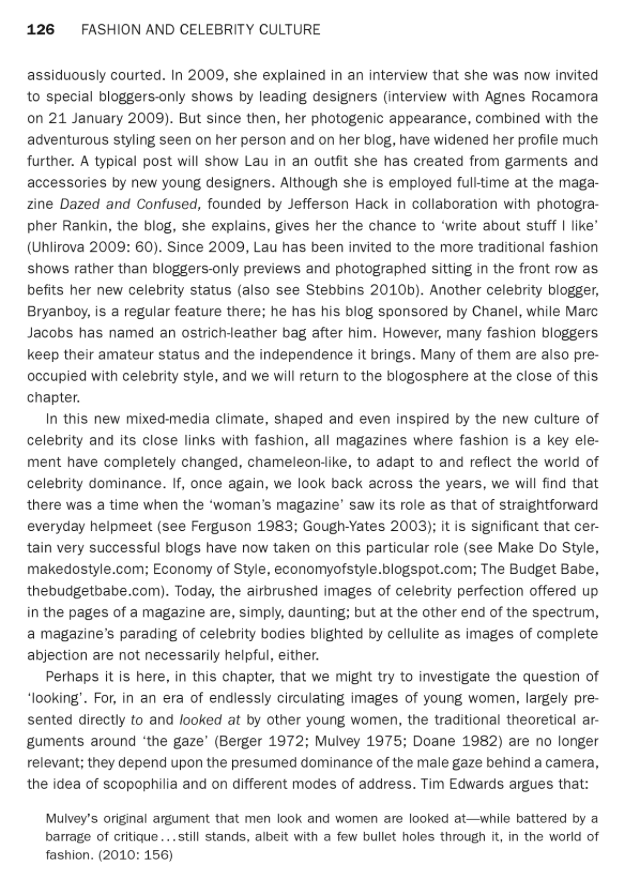 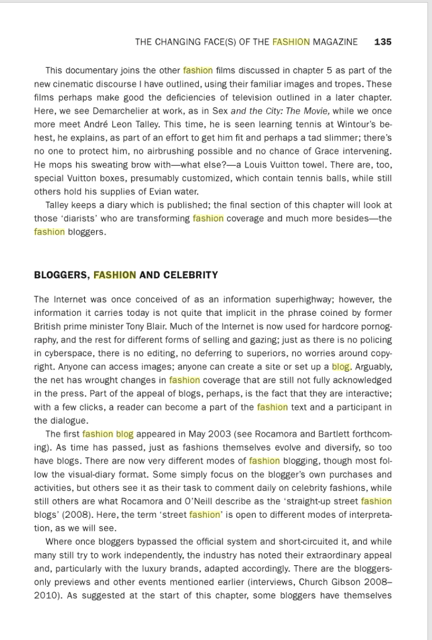 I found the above excerpt (p.136) interesting in the sense that Gibson references a 9-year-older blogger whose fame rose through the internet as is now seen as somewhat of a celebrity herself being invited to exclusive events. Again I feel that this is down to accessibility, magazines allow for readers to view articles and images, whilst social media allows those as young as 5 as seen in a previous post regarding a child Instagram beauty blogger Makayla Starr, to be apart of such communities and cultures. This I feel as discussed in depth previously in my research, has big impacts on one’s self-awareness and self-perceptions as highlighted through Freud and Lacan’s Mirror Stage theory (1949), whilst also in my opinion, posing as a negative impact on behaviour through social media.

With the first fashion blog launching online in 2003 (Gibson, F, 2012, p.135) over the past 14 years, the blogging world surrounding the beauty and fashion industries has taken off, with Vuelio conducting a National Blogger Survey earlier this year (2016) working with over 534 UK bloggers alone, to explore this culture, purpose and reception in detail (Vuelio, 2016, p.17). It was stated that 77% of all bloggers are female, and within this  27% of those are bloggers within the beauty and fashion industries (Vuelio, 2016, p.3-5). I feel that this statistic alone encompasses the power of such female blogger culture, with lifestyle as a theme being next ranked with 27%, followed by parenting/family at 11%, showing dominance of such stereotypical markets (Vuelio, 2016, p.5-6.).

Even though this survey only covers UK bloggers, I feel that this shows on a national basis how such a large amount of users may work on personal or professional beauty/fashion blogs, which may in turn have negative behavioural changes. In addition, even though these are ‘UK bloggers’ unlike magazines, blogs are available internationally online and therefore show in context how this could be damaging collated with further blogs from around the world.

I feel that such quantitive information can only help with working towards my research topic and objectives, whilst going forwards, I would like to have a look at similar surveys from Japan in order to gain comparable data working towards objective 1.A and 1.B., whilst also adding further context to my research prior to visiting Tokyo for field-research and interviews with Vogue magazine to understand this further on a cross-cultural scale. This will also help when speaking with Japanese females between the ages of 18-24 in the UK, whilst the information noted above will be of help when speaking to UK females between the ages of 18 – 24 retrospectively, working towards objective 3. In support of this, I would also like to contact both UK and Japan based bloggers to collate further research using the same comparative and quantifiable methodologies as discussed above. 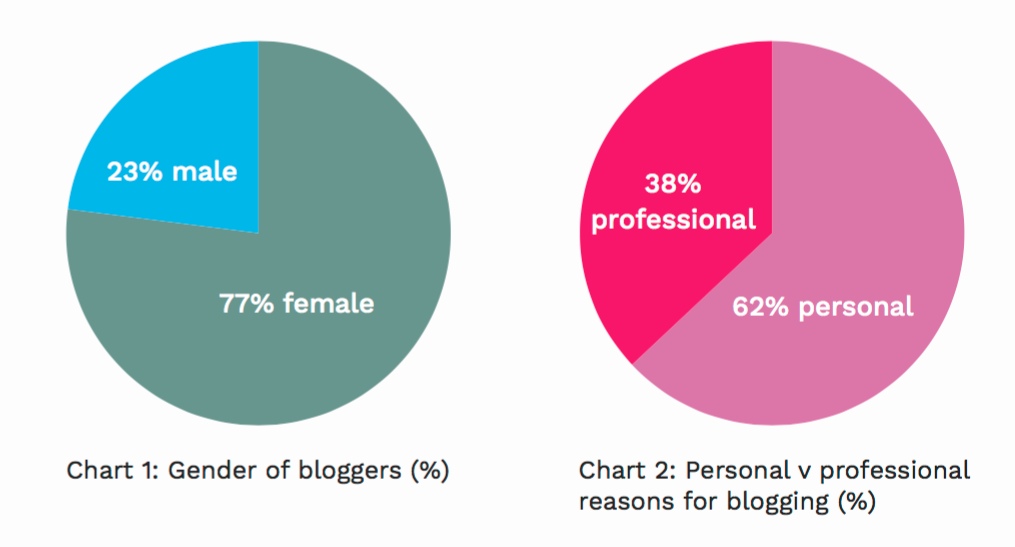 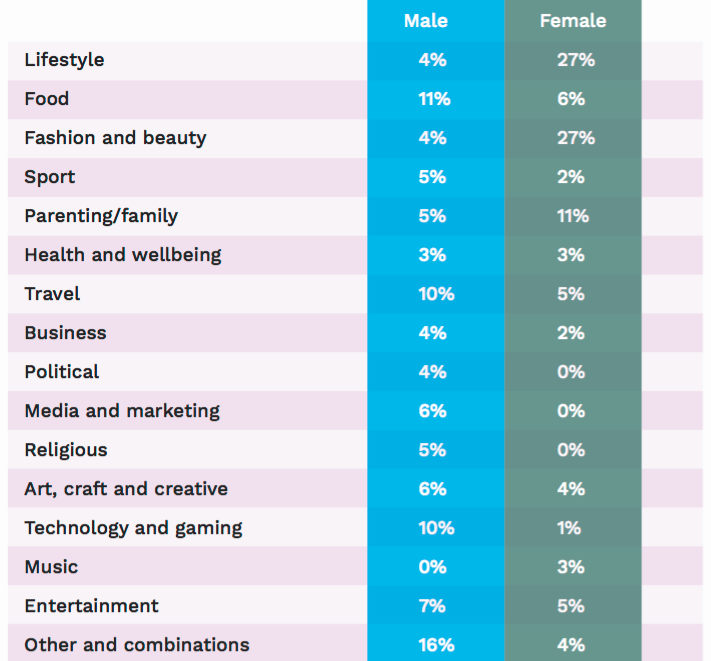 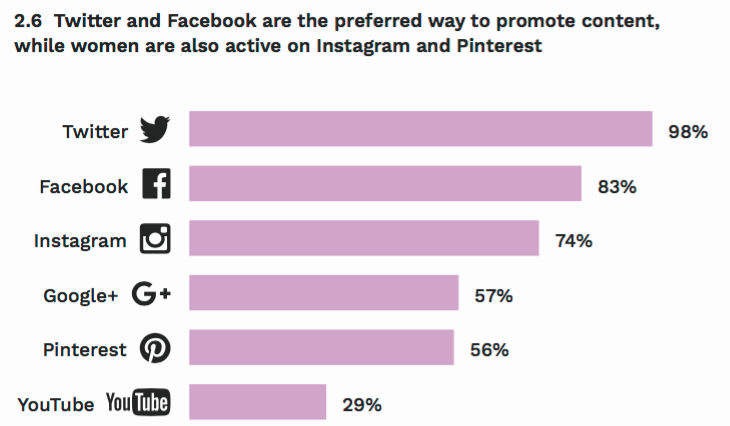