Shiseido has arisen in research several times throughout my research to date:

I therefore decided to research more into the Japanese brand before travelling to Tokyo, to carry out primary research. I wanted to look into their history, as through my reading and research to date, it has become apparent of late that Shiseido have been, and are still, extremely large influencers in Japanese ideals of beauty.

‘Shiseido Group’ now controls multiple brands in multiple countries across the world, opposed to being a Japanese company (i.e. NARS USA and Issy Mayake Fragrances). This is reflected through the imagery on the homepage of the group website below, however the copywriting, in my opinion reflects a somewhat indirect connection with a specific Japanese audience. I feel this is also highlighted, indirectly yet consciously, by the Japanese woman situated in the centre of the gridded images.

“Beauty lies within… and every time we bring it to light, we make the world a little brighter”.

From my research, I found the use of the world “light” to signify ‘white’ – none of the 9 shown are of Black Caribbean or African decent, for example. The 9 people shown are of either caucasian or asian decent, hinting at racial prejudices and racial identity still being key factors for a Japanese brand. This is an idea discussed heavily in the writings of Mikiko Ashikari’s “Cultivating Japanese Whiteness” (2005), whereby it is stated that:

“Hiroshi Wagatsuma, a Japanese anthropologist who studied in the US, was probably the first to conduct anthropological research on skin colour in Japan. In his English article of 1967, he argued that a dichotomy observed in the 1960s in Japan, ‘white/beautiful versus black/ugly’, should be attributed to Japanese aesthetic values (Wagatsuma, 1967: 407)”

Ashikari (2005) also notes in regards to racial identity that:

“A lot of recent studies suggest that Japanese identity is largely based on a sense of racial identity (see Kondo, 1997; Oguma, 1995; Siddle, 1997; Weiner, 1997; Yoshino, 1992, 1997). Most studies conclude thus, by examining either historical documents or racial images distributed by the mass media in contemporary Japan.” 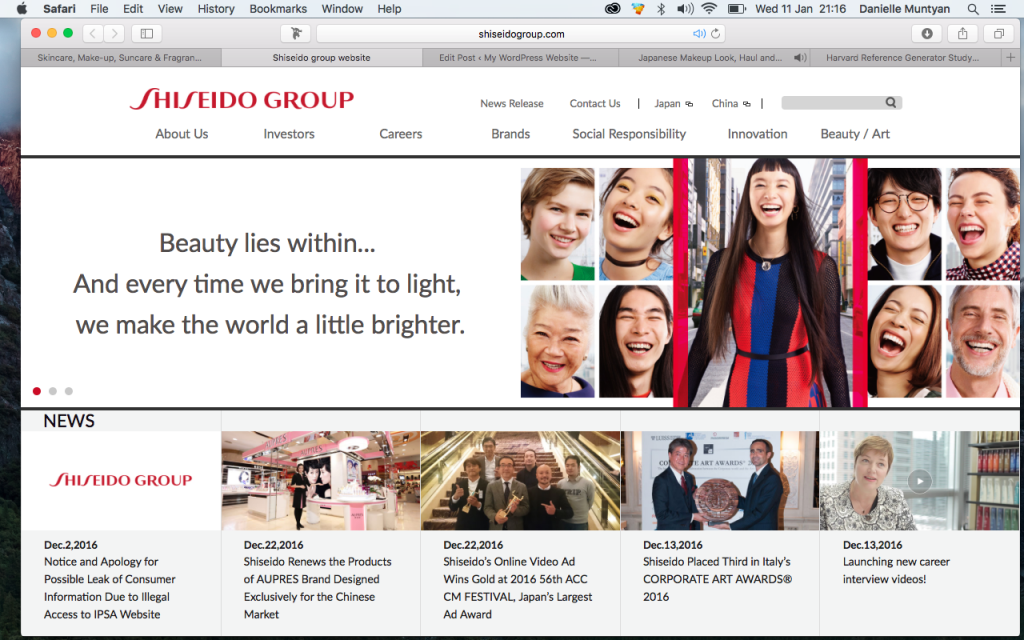 In relation to the copywriting below of the ‘brand message’, I found it staggering that the word, ‘beautifully’ is noted 5 times in the screenshot below, plus the use of the word, ‘beautiful’ once. The emphasis on living a beautiful life, essentially gives consumers the ideology and belief that through buying into their brand and products, they can also live “This life. Beautifully.” too. 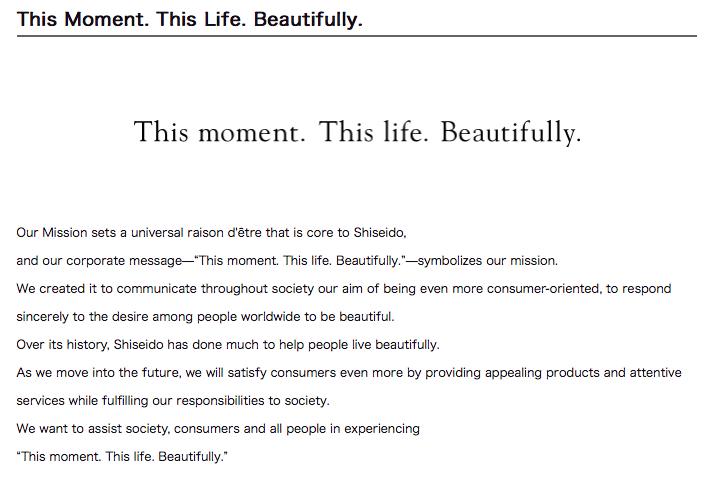 Below covers Shiseido’s history as a brand which allows for understanding of present day the beauty cultures in Japan. Excerpts have been taken from the ‘History’ page on the Shiseido Group website, along with visual and written contextual support from Weisenfield’s Visualising Culture; Selling Shiseido (2009) visual essay. I found this extremely interesting to read, and found overlaps from recent conversation and other academic research regarding modern positioning of cosmetics and beauty in Japan, whilst being able to relate to theories such as ‘The Gaze” (Mulvey, L. 1999) and “The Self-Surveying Gaze” (Shields and Heineken. 2002), for example, which were analysed in Semester 1.

I have chosen to include key excerpts which I feel encompass the history as a brand and have perhaps furthermore shaped present day perceptions and ideologies of the Japanese, and ‘Japaneseness’, allowing a better understanding in relation to my research topic.

Overall the below reflects a range of key-topics such as; skin-lightening products, their use of theory-led advertising campaigns and western models, whilst also accounting for social and cultural history of ‘working class women’.

History of Shiseido in Conext:

This was a white powder which was made up of seven colours in order to match each skin tone – white, yellow, flesh, rose, peony, green and purple. The powder was very popular among Geishas as a means of “projecting an appealing image under the lights”.

In 1934, nine women (chosen from 240) debuted as ‘Miss Shiseido’ (a beauty consultant). Over the course of seven months of preparatory training, the women studied in such areas as beauty techniques, cosmetology, dermatology, physiology, publicity, dress, fashion, singing, Western painting and drawing, and etiquette, and they were expected to display a wide range of knowledge and sophistication. The first engagement for the Miss Shiseido women was the Theater of Modern Beauty, which opened throughout Japan beginning with Takashimaya in Osaka. Presented in a stage format, the five scenes were a unique way of introducing the latest beauty methods and techniques so that the audience could absorb beauty knowledge while enjoying the show.

After the performance, the women quickly changed into their uniforms and provided beauty counseling to each visitor one by one, and wrote down beauty prescriptions for them.

This was the start of the “counter activity” (storefront activity) to introduce beauty methods that suited the skin type and taste of each customer. 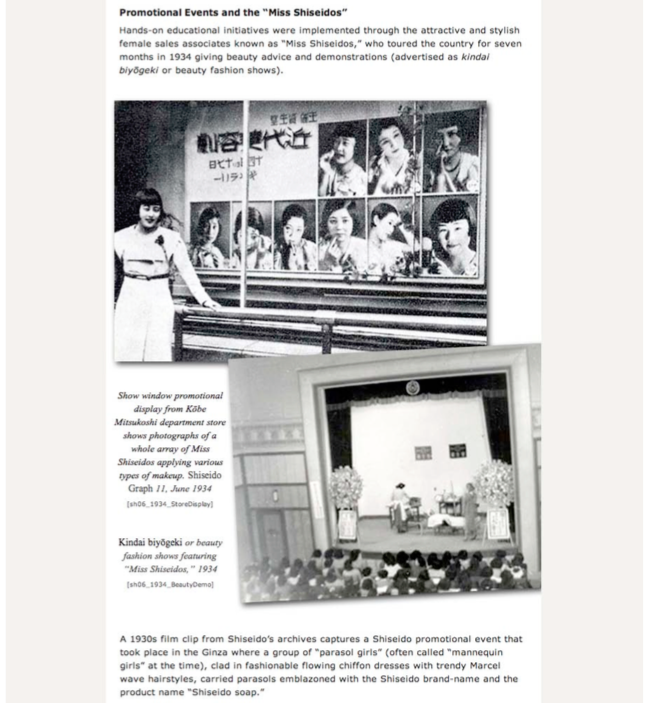 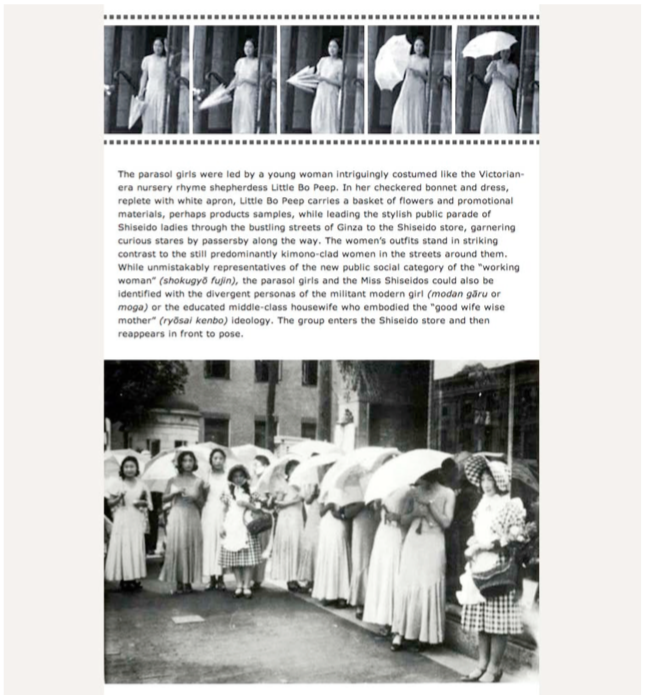 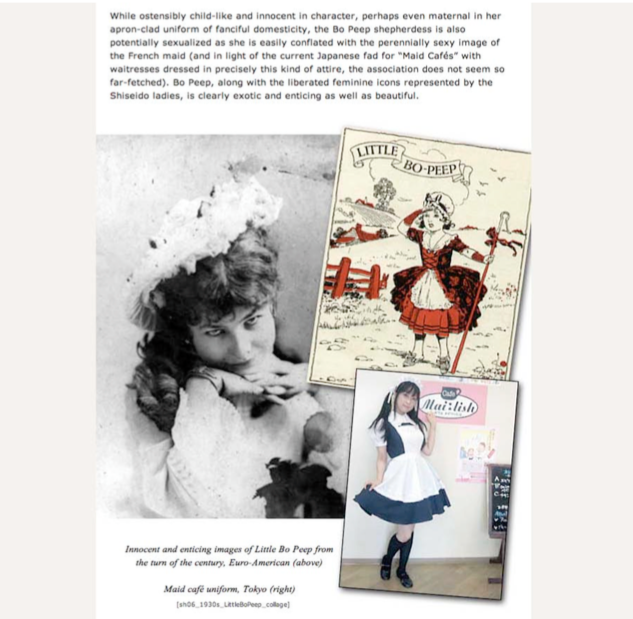 At the time the Japanese economy was stable, the age of mass production and mass consumption had begun, and people’s living standards had improved. Against this background, Shiseido put on its ’61 Candy Tone campaign to bring to the forefront the seven lipstick colors that were expected to be fashionable that spring. A good impression was made on consumers through cooperation between advertising and points of sale. Starting with this campaign, Shiseido would go on to expand each of its seasonal campaigns.

In 1966, Shiseido adopted the “sun” as the theme of its “Beloved by the Sun” summer campaign featuring the healthy beauty of tanned skin. The campaign was a big success, turning people towards the idea that tanned skin was part of a woman’s right to be beautiful.In addition, it was the first time in Japan that an overseas photo shoot had been done in Hawaii, making the posters so popular for a time that they were being stolen from stores throughout Japan, and the formerly unknown model, Bibari Maeda, became a star overnight. This summer campaign was the start of promotions glorifying summer under the shining sun.

In 1985, at the request of the New York Fashion Institute of Technology (FIT), “The Art of Beauty” exhibition of Shiseido advertising was held as part of the twentieth anniversary commemorative event for Shiseido Cosmetics America. Ad designs and posters, as well as product packaging and more were shown in contemporary settings. High praise was showered on the original artistic qualities of Shiseido’s advertising materials.The following year, the collection was further enriched with the Shiseido Advertising Art Exhibition organized by a Paris advertising art gallery. Shiseido’s design work was a unique visual expression of a hybrid between traditional Japanese culture, and French art nouveau and art deco, receiving praise from many French people.

Company cultural exhibitions were held thereafter such as “Paris-Tokyo-Paris Shiseido 1897-1997 La Beaute,” organized in 1997 by the Musée des Arts Décoratifs in Paris, and “Face to Face: Shiseido and the Manufacture of Beauty, 1900-2000,” organized in 2000 by New York University’s Grey Art Gallery.

These activities have made Shiseido’s originality stand out and have contributed to the company’s prestige.

Announced ‘The Shiseido Way’ (corporate behavior) and announces ‘The Shiseido Code’ (corporate ethics and behavior standards). This has now been reintroduced in 2011 as the Shiseido Group Corporate Philosophy under the banner “Our Mission, Values and Way.”