Below shows my second Professional Context presentation focusing on the theories surrounding my current practice in relation to my working research question.

I have applied feedback as noted on a previous post following a run-through in last week’s tutorial with my supervisor Anne-Marie, in order to make my presentation smoother in regards to flow whilst ensuring that the content chosen is relevant and concisely put across, allowing to keep within my time limit of 5 minutes.

This presentation will cover the key theoretical perspectives in relation to my current research and practice.

I feel as though the media should be held accountable in regards to being responsible for promoting ‘ideals’ of women, leading to theorists to discuss and debate options as to why women’s self-perception can change through these external influences, triggering internal influences and critiques.

My working research question is, “a cross-cultural study in an aim to understand ‘how Social Media and Magazines within the Beauty and Fashion Industries affect our sense of body image and self-perception?” and have therefore listed various theories I have touched on during research in relation to my specific research question. However, for the purposes of this presentation I will cover several key theories, which I feel at this moment in time, are most relevant to my practice – Self-Perception Theory, Social Identity Theory, The Male Gaze and The Self Surveying Gaze, along with the Theories of Objectification and Self-Objectification.

Self-Perception is integral part of my current practice shaping my practical work to date, being the anchor point of my research question, whilst the other noted theories are of importance due to underpinning the links between context and graphic design. 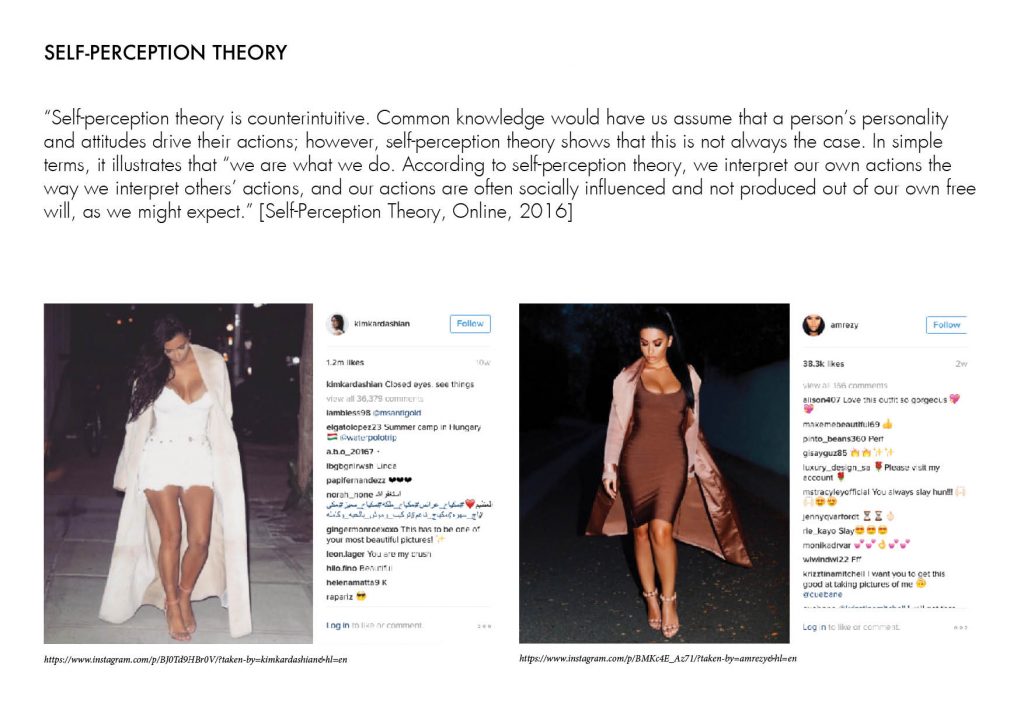 It is said that “Self-perception theory is counterintuitive. Common knowledge would have us assume that a person’s personality and attitudes drive their actions; however, self-perception theory shows that this is not always the case. In simple terms, it illustrates that “we are what we do.” We interpret our actions and the actions of others, therefore allowing our actions to be socially influenced opposed to be being completely self-led. I felt that this resonated with the current trends of social media surrounding the beauty and fashion indsutries, whereby we often see whose whom actions and appearances are ‘socially informed’ opposed to produced from freewill.

This demonsrated with two images shown – one of Kim Kardashian, and one of Makeup Artist/Instagram Icon, Amreezy – both show that they are practically holding the same pose in similar attire, with similar postures and facial features. Does this example alone represent how social media has affected our self-perception, allowing us to feel it is okay to perceive ourselves, or see ourselves in a similar way to others in order to attain positive appraisal? This is one example, shows how us the public, can use our aspirations and socio-culturally accepted ‘ideals’ to shape our own identities and egos, which leads me on to the theory of Social Identity. 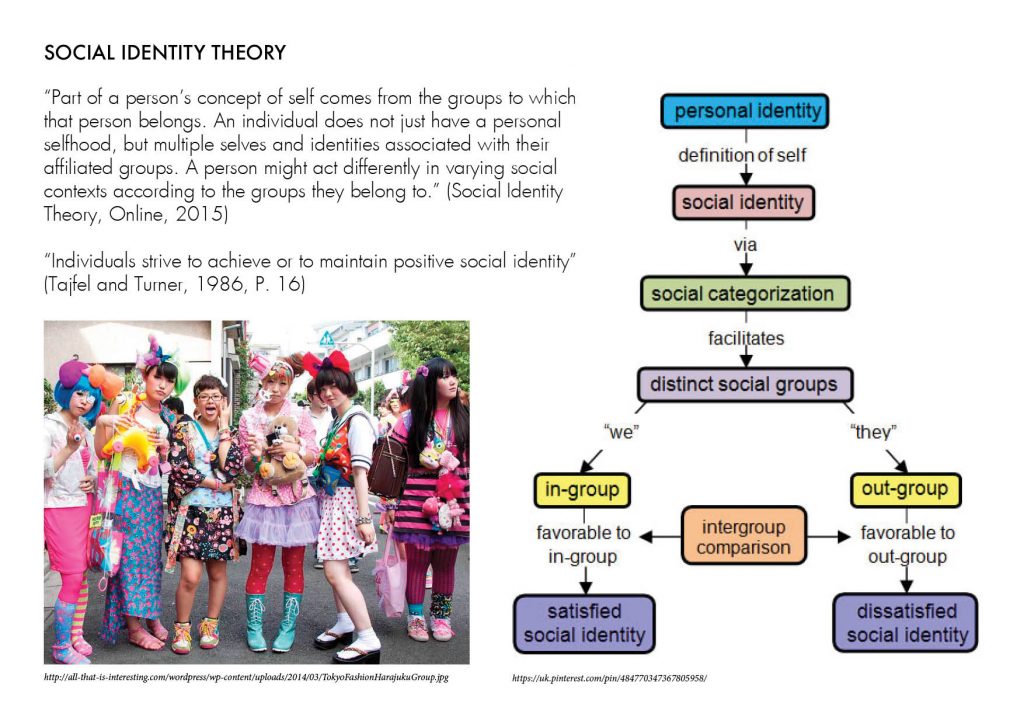 Henri Tajfel and John Turner in 1979, and stated “part of a person’s concept of self comes from the groups to which that person belongs. An individual does not just have a personal selfhood, but multiple selves and identities associated with their affiliated groups. A person might act differently in varying social contexts according to the groups they belong to” acknowledging the fact that people act different, and at times look differently also depending on their social situation.

Tafjel and Turner note we belong to ‘social groups’, however this can also be said for the way that people now position themselves on Social Media, changing their identities to ‘fit in’, whilst celebrities often featured in weekly gossip magazines, do the same. This can also be said for alternate groups of people also, especially within the fashion indsutry whereby perhaps they do not fit in the groups that are perceived as ‘normal’ by many, and may not necessarily fit in with the mainstream trends.

The image of the Harajuku girls has been selected as this ‘group’ have accepted the social identity of which they belong and feel satisfied. I feel this image is really important as it is a huge contrasts to the imagery shown from Japan Vogue in my last presentation whereby Japanese women were told that they had to change their to ‘fit in’ and be accepted by society, with Turner and Tafjel stating that “individuals strive to achieve or maintain positive social identity”.

This can be seen represented in the Social Identity Theory model, which shows how ones personal identity and sense of self, is formed through their acceptance or non-acceptance into a social group, and the retrospective intergroup comparisons. ­ 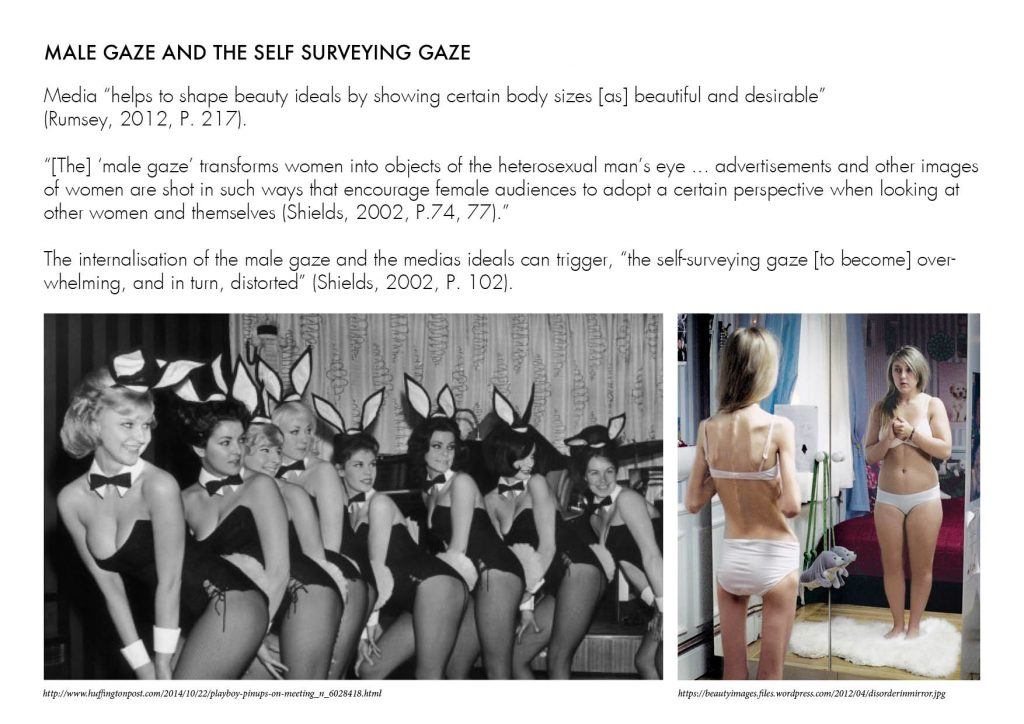 SLIDE 4 – MALE GAZE AND THE SELF SURVEYING GAZE

In seeking social acceptance and aesthetic approval, the idea of the “Male Gaze” theory is prevalent. Rumsey, stated that, “Media help us to shape beauty ideas by showing certain body sizes [as] beautiful and desirable” summarising how the fashion and beauty industries alike can affect our self-perception and perceptions of others due to a pre-determined ideal which is embedded in our subconscious.

For example, a photograph of the original 1950’s Playboy Bunnies on the left shows how women knew they were objects of male attention and the male gaze, proudly wearing their corset-based uniforms, in turn becoming the ‘ideal’ and subsequent ‘sex symbols’.

Many theorists have noted the male gaze, however I found this particular quote from Shields quite revealing showing how women’s perspectives of themselves can change as a result of a male eye, viewing themselves from such view point instead of their own allowing for one to ‘appeal’ –

“[the] ‘male gaze’ transforms women into objects of the heterosexual man’s eye …
advertisements and other images of women are shot in such ways that encourage female audiences to adopt a certain perspective when looking at other women and themselves” therefore internalizing the male gaze and the medias pre-set ideals triggering, “the self-surveying gaze”.

This is represented via the right hand side image, whereby our self-perception becomes distorted, not being able to recognise the ideal nor reality, adding pressures to look a certain way due to this new, internal influence. 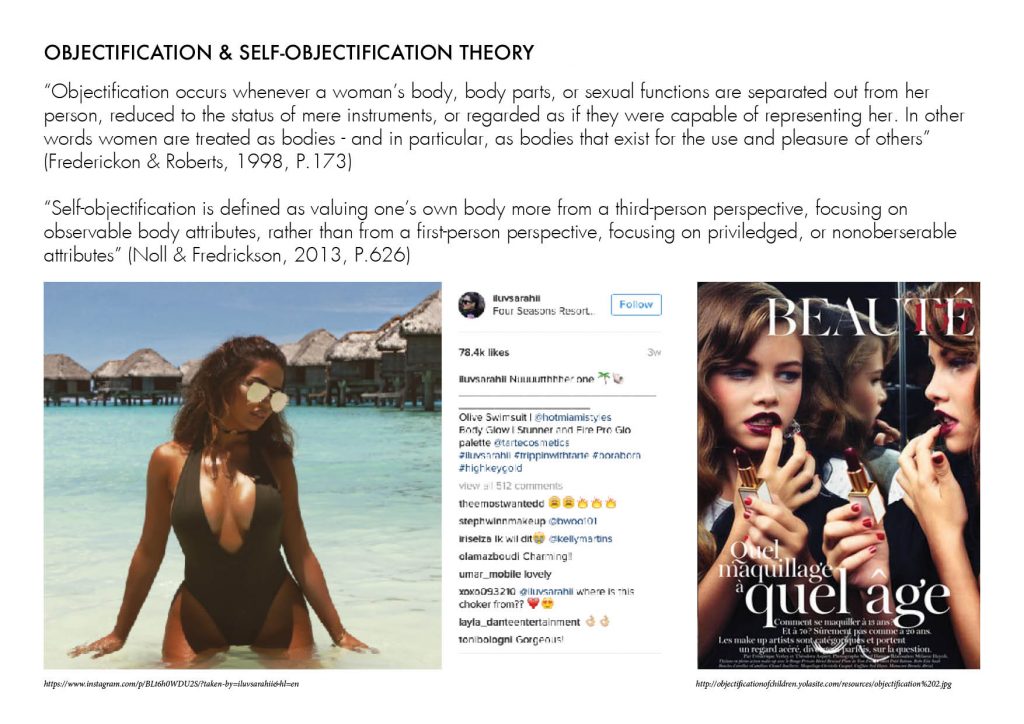 In addition to the various theories discussed, I believe Frederickson and Roberts’ theory of Objectification is key to understanding how women are portrayed in the media, suggesting that women may perceive themselves as objects or commodities that are there to be looked at, and judged accordingly.

It is said “objectification occurs whenever a woman’s body, body parts, or sexual functions are separated out from her person, reduced to the status of mere instruments, or regarded as if they were capable of representing her. In other words women are treated as bodies – and in particular, as bodies that exist for the use and pleasure of others”

Looking at the photograph of Sarah Gonzalaz, a Makeup Artist turned Instagram icon, this theory can be seen, with Sarah recognising the need to objectify herself and her body as a commodity and marketing tool, knowing what the ‘outsiders’ want to see, internalising this and therefore becomes an example of self-objectification. Furthermore on the right hand side, an editorial from Vogue France can be seen whereby a young girl is being objectified through the use of her body part’s, being separated out as commodities of influence, holding a seductive glare and being vary aware of her ego, encompassing many of the theoretical perspectives considered throughout this presentation.

To summarise, Fredrickson and Roberts define self-objectification “as valuing one’s own body [from] a third-person perspective, focusing on observable body attributes”.

Combined I feel this short overview of key theories, shows how powerful both social media and magazines can be within the beauty and fashion industries, especially when regarding our perceptions, not only of ourselves, but of others also, encouraging change for external pleasures, approval and acceptance.