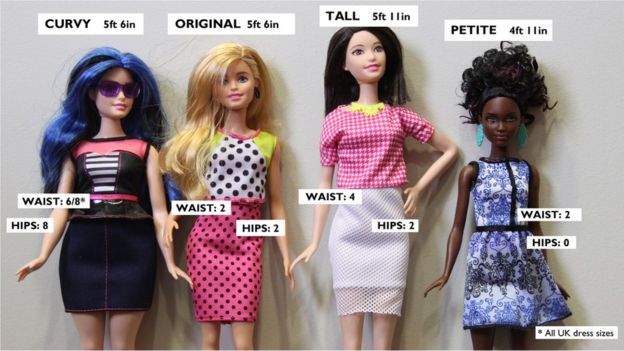 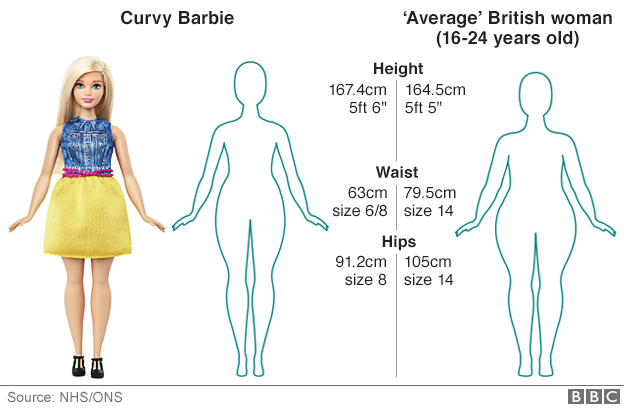 BBC Article: “How does ‘Curvy Barbie’ compare with an average woman?:

I came across this article whilst researching the sizing and scaling of Barbie dolls in relation to a previous post discussing a Barbie store in Tokyo, Japan.

“Mattel has been praised for the release of three new types of Barbie – curvy, petite and tall. They’ve now gone on sale in the UK but how close do the dolls come to representing the average young woman?”

In addition to the Petite, Tall and Curvy Barbie’s which Mattel have released this year (2016), there have also been the release of the “latest Fashionistas line” which represents a wide range of different skin tones and ethnicities helping to be more inclusive of the consumer. Examples of these can be shown below. These have been taken from the Barbie website. 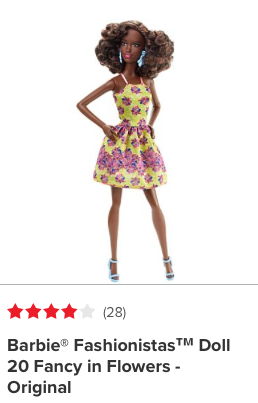 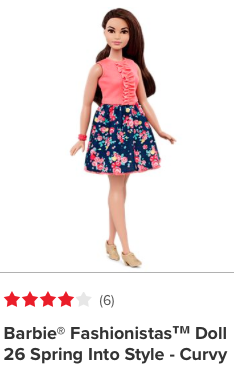 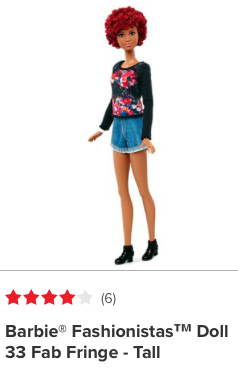 “Mattel says it doesn’t have a scale that would give Barbie’s full-size dimensions. But there is “playscale” – a ratio of 1:6 that governs the size of many toys. If you accept that as a ratio for Barbie then you can multiply all her dimensions by six to find the real-world size.

Like the first ever Barbie, Curvy Barbie is 11in (27.9cm) tall. Multiply by six and you find Barbie would be 5ft 6in. That’s taller than the average UK woman at 5ft 3inand slightly more than the average US woman at just under 5ft 4in.

Real-life Barbie has often been credited as being 5ft 9in, but this may come from measuring the doll in its typical high-heeled shoes before scaling up. To simply take Barbie as 5ft 9in would produce a ratio of 6.35 and different measurements.”

It has been said that “if original Barbie were a real woman she would have a size 2 waist (54cm) and size 2 hips (78cm)” which would make her fit into children clothes, and not even that of a UK Petite Size 4 – equivalent to the US Size 0.

However, were Mattel required to accurately reflect the average British and American woman across all ages, the dolls would be overweight or obese.”

This last quote regarding how the average British or American woman as a doll would be reflected as overweight, or even obese, highlights that perhaps as a business this wouldn’t be a viable, commercial product to sell as Barbie dolls are now seen as aspirational characters for children, promoting fancy clothing and good careers reflected by their attire building a picture which a child can mould and shape as their own in their minds. However, with Mattel again claiming that “she [Barbie] is not meant to reflect a real woman’s body … the purpose of introducing three new bodies into the range is variety and differentiation. When you look at the dolls collectively you can see the range in relationship between the dolls. ”

Psychologist Helga Dittmar, from Sussex University, reinforces my point made above, stating, “to say ‘Barbie isn’t supposed to be realistic’ is side-stepping the issue. If there is evidence that the doll does harm, if intended or not, then that is extremely worrisome” reinforcing the ignorance of the manufacture companies and their design ethics as a brand, furthermore pushing mental health effects which can still come into play by these unrealistic standards which are not set as standards, but as society and cultural has changed, has become an ‘ideal standard’ to strive towards.

Furthermore, “Dittmar conducted research in 2006, which found that children aged between five-and-a-half and seven-and-a-half years old, were less satisfied with their own body shape after reading a book featuring pictures of the original Barbie. Those who read the same story without the images were not affected. The girls said they wanted a thinner body shape than they had. They had lower body-esteems after seeing pictures of Barbie. If we show an effect with a single exposure study it stands to reason that the impact increases as time moves on” which again highlights the issues around self-perception, body image and the impact of female representations.

Lenore Wright also added after conducting research at the University of Texas that, “[There has been] an increase in body consciousness, and it’s possible this is being projected on to the doll. Mattel focus groups found many of the young girls called the Curvy Barbie ‘fat'” and notes that the product line up has been heavily criticised by ‘Feminist Scholars’ for stating that “women are defined by their bodies”. I do agree in the sense that women are viewed in certain ways according to their ‘looks’, but do believe that we should be allowed to be who we are, and not feel forced or obliged to change how we look because the media or a plastic doll tells us too.

In addition, the next point raised in the article reminded me of the idea of the Male Gaze, coined in 1975 by Feminist Laura Mulvey, and how “all four of the Barbies have a waist measurement that is close to 70% of their hip measurement. Studies have suggested that men find women more attractive when they have a 0.7 waist to hip ratio, whatever their weight” which again proves that Mattel are aware of what is seen as desirable, subconsciously allowing the child end-user to create, imagine and play with this ‘ideal’ figure, enabling them to grow up with this picture in mind.

I find the release of these ‘new dolls’ an attempt from Mattel to correct going forward some of the damage which they will of undoubtedly caused in the past in relation to self-perception, confidence and mental health for example. However, still being extremely unrealistic even if they now do feature different skin tones, the dolls in my opinion, and through fact and research based evidence still represent women in the wrong way and allows for this to become seen as the norm.