However, in regards to my current practice and experimental projects I am undertaken, Kruger’s work resonates with mine on both a theoretical and visual manner in many respects, using copy to stimulate thought, and visuals to contextualise commercial, media and socio-cultural related issues.

I found the Kim Kardashian W cover to be particularly interesting, especially in regards to its execution. Appearing naked as in many of Kim Kardashian’s most famous Instagram shots and magazine covers, her body is covered by Kruger’s red and white slogans hinting at narcissism and self-obsession, which I found interesting as I have referenced and researched both Kim Kardashian and her sibling, Kylie Jenner in regards to my research question, whilst currently producing experimental posters and prints, for example, aimed at a range of the issues noted in Kruger’s works.

I have also bolded any key points below across several quotes, which I feel really contextualise the relationship between Kruger’s works and my current practice/research. In addition, it is noted below that Kruger often used screen printing and photolithography to produce final resolutions of her works. I have already experimented with screen printing, and have evaluated my techniques and processes in a previous post, however feel that photolithography works much better for monochrome photos, and feel both in terms of cost and time digitally printing, or digitally curating my final resolutions may be the best outcome in regards to gaining best visual impact and detail from my works, whilst appealing to the target audiences of my works more appropriately.

I would be interested in recreating some digital pieces of work influenced directly by Kruger, however keeping true to the tone of voice and aesthetic which has already been established whilst experimenting so far, to see how the target audience engage with photographs rather than graphics, for example.

“In a virtual world, virtual words are becoming virtually weightless, dematerialized. The more words wash over us, the less we understand them. And the less we are able to recognize which ones are influencing us—manipulating us subtly, invisibly, insidiously. Barbara Kruger rematerializes words, so that we can read them closely, deeply.” (3)

“Barbara Kruger addresses media and politics in their native tongue: tabloid, sensational, authoritative, and direct. Kruger’s words and images merge the commercial and art worlds; their critical resonance eviscerates cultural hierarchies — everyone and everything is for sale.”(1)

“I try to deal with the complexities of power and social life, but as far as the visual presentation goes I purposely avoid a high degree of difficulty.” (4)
“Although my art work was heavily informed by my design work on a formal and visual level, as regards meaning and content the two practices parted ways.” (4) 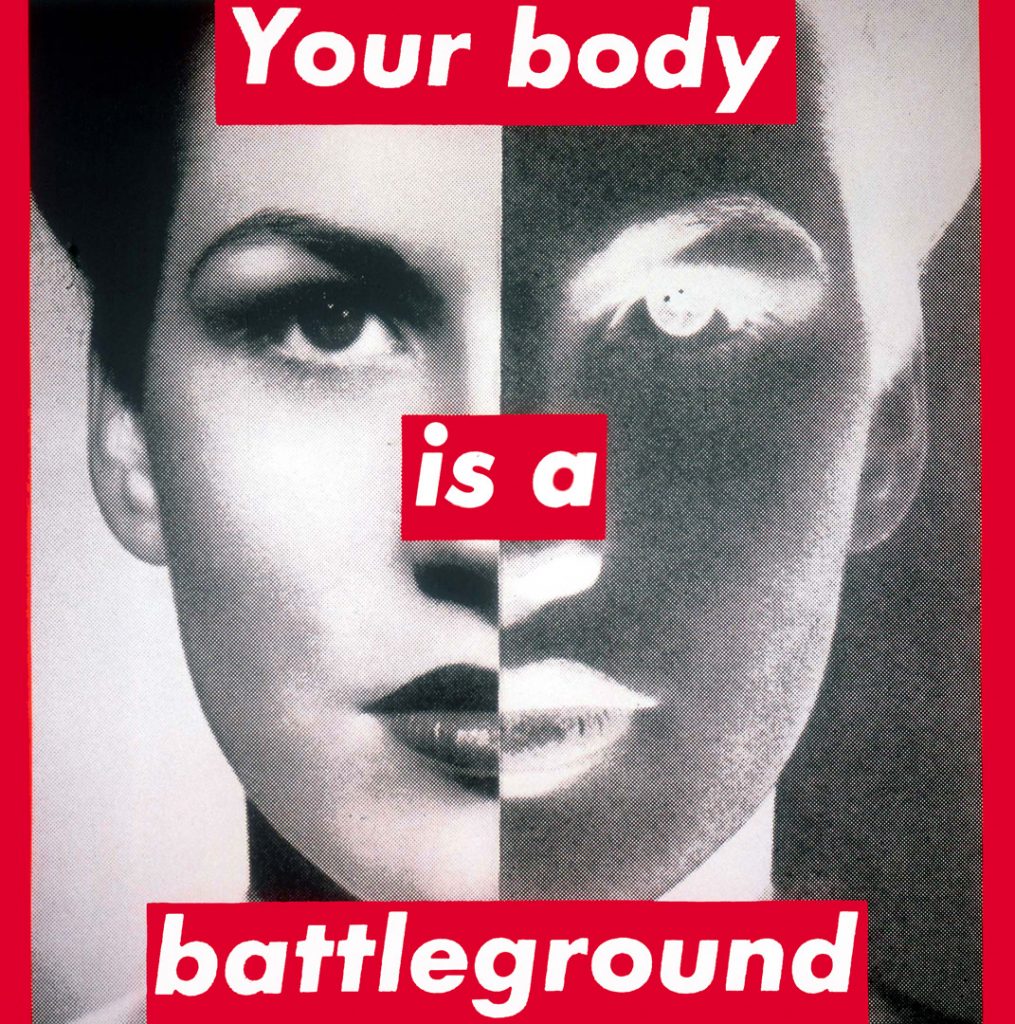 “The year 1989 was marked by numerous demonstrations protesting a new wave of antiabortion laws chipping away at the 1973 Roe v. Wade Supreme Court decision. Untitled (Your body is a battleground) was produced by Kruger for the Women’s March on Washington in support of reproductive freedom. The woman’s face, disembodied, split in positive and negative exposures, and obscured by text, marks a stark divide. This image is simultaneously art and protest. Though its origin is tied to a specific moment, the power of the work lies in the timelessness of its declaration.”(1) 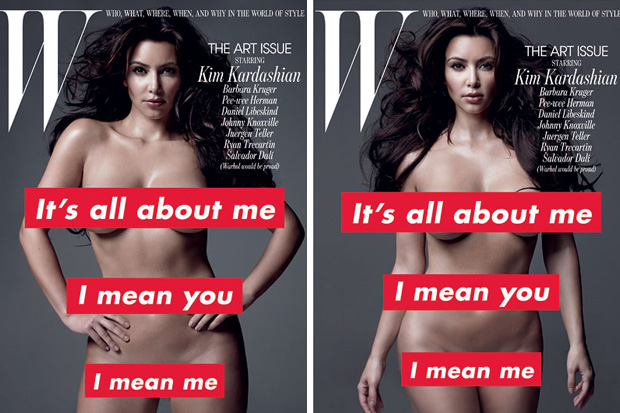 Image Source
“The work is about…audience and the scrutiny of judgment…fashion and the imperialism of garments, community and the discourse of self-esteem, witnessing and the anointed moment, spectacle and the enveloped viewer, narrative and the gathering of incidents, simultaneity and the elusive now, digitals and the rush of the capture.” There’s much, much more just in case we miss any aspect of what “the work is about.” (3) 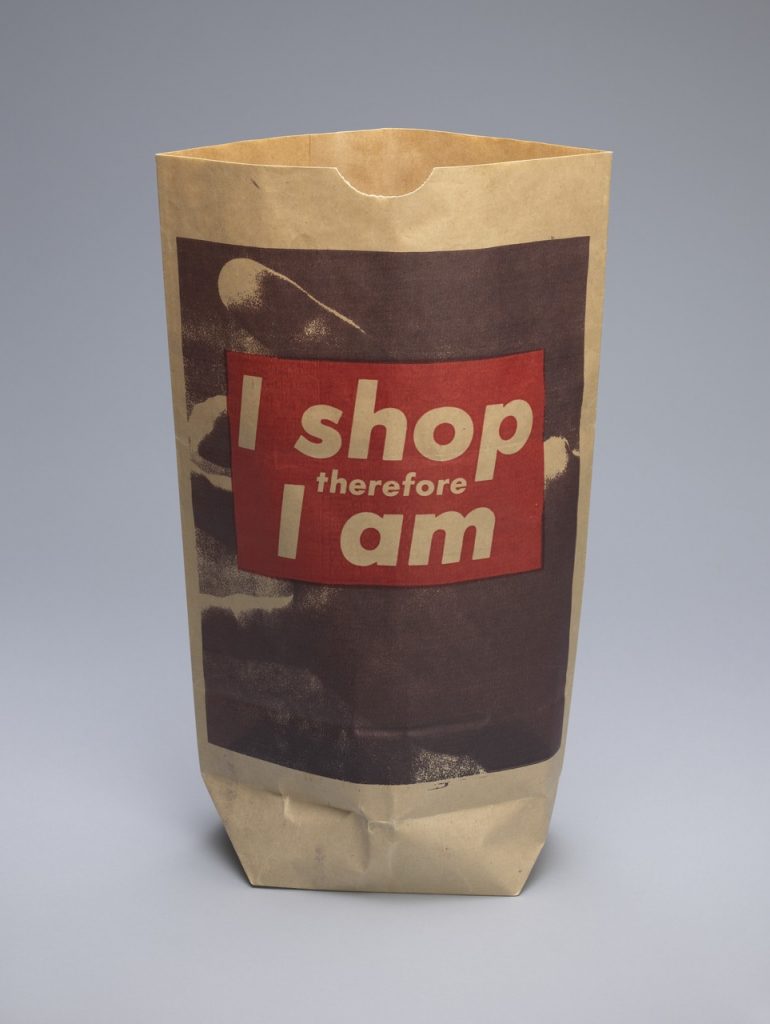 “Between the late 1970s and the early 1980s, Barbara Kruger, working as a graphic designer for popular magazines, gained recognition in the art world for photo-based images overlaid with blocks of text in a signature color scheme of black, white, and red. Her practice of culling and editing found photographs and of pairing them with phrases in provocative ways was informed by her interest in feminism and critical theory. These investigations into the seemingly innocuous and yet potentially insidious ways in which ideological messages infiltrate daily life by means of the mass media continue today.”

“The techniques of photolithography and screenprint are ideally suited to Kruger’s strategies of appropriation and replication of imagery from mass culture, and they are used throughout her work, whether large-scale and unique, or ephemeral and printed in thousands of copies. Her ephemeral works, which dramatically fulfill the democratic potential of printmaking to bring art to wide audiences, range from book, magazine, and compact disc covers to matchbooks, coffee mugs, and shopping bags. It is noteworthy that visual strategies she appropriated from the mass media have been returned to their sources on covers she created for such magazines as Newsweek and Esquire. In addition, countless graphic designers have adopted her visual style.” (2)