This is continuing to work towards Objective 4: To prototype a range of design work targeted at 18-24 year old women, highlighting impacts of cross-cultural beauty/fashion trends on self-perceptions and body image.

For semester 2, in order to plan my practical project, I began by working from semester 3 backwards in order to realise my revised objectives, post research trip to Tokyo. For semester 3, for my final major practical project, I would like to produce a cross-cultural independent magazine, exploring cultural confluence in addition to contrasting cultures, ideals and trends across the fashion and beauty industries. I aim to pitch this as the first in a series of international cross-cultural editions, comparing different perspectives within this area.

Therefore for semester 2, I plan on producing a mini-independent magazine/zine/trend sourcebook prototype exploring cross-cultural and contrasting beauty trends, emphasising and raising awareness on the contrasts between the beauty industries in Japan, compared with the UK. This has been influenced by my primary research carried out in both the UK and Tokyo. Through the copywriting, I would also like to address issue relating to self-perception, however do not want to make this the main emphasis, as this will feed more into my semester 3 practical work when a magazine is designed using collated research from interviews in addition to theoretical research and perspectives collated throughout this semester.

I am considering the use of this publication, as a way of promoting the magazine which would be produced in semester 3, via information inside and perhaps a pull-out poster promoting the upcoming magazine. In addition, I would like to use this prototype to develop a clear understanding of whom the exact target audience will be for my final project. Time permitting, I will also consider promoting/sharing the publication digitally.

A digital version will allow for an international audience to be able to view and read the magazine opposed to being limited to ‘hand-out’, or ‘pick-up’ distribution methods for example – colleges/universities, independent book/magzine stores (i.e. The Village and Colours May Vary in Leeds), lectures, talks, events of relevance). By testing the magazine/zine as a prototype, this allows for distrubition methods and precise target audience to be considered, whilst enabling myself to see which methods generate the best response/reception.

As a prototype, I plan on exploring different binding, stocks, design-led and printing techniques during pre-production.

It will be informative via choice of editorial content, copywriting and design-led visuals. It will be aimed primarily at females between the ages of 18-24 whom have an interest of beauty and fashion (as noted above), in both the UK and in Japan to raise awareness of different beauty cultures and industries, however I would like to use this prototype to confirm this or negate this dependant on feedback and reception.

In addition, the prototype publication would also act as a source book for information regarding different Japanese trends and cultures.

In addition, by producing a prototype this will allow for any costs to be considered at this stage, which may alter/change print/binding, for example, moving forwards into semester 3. 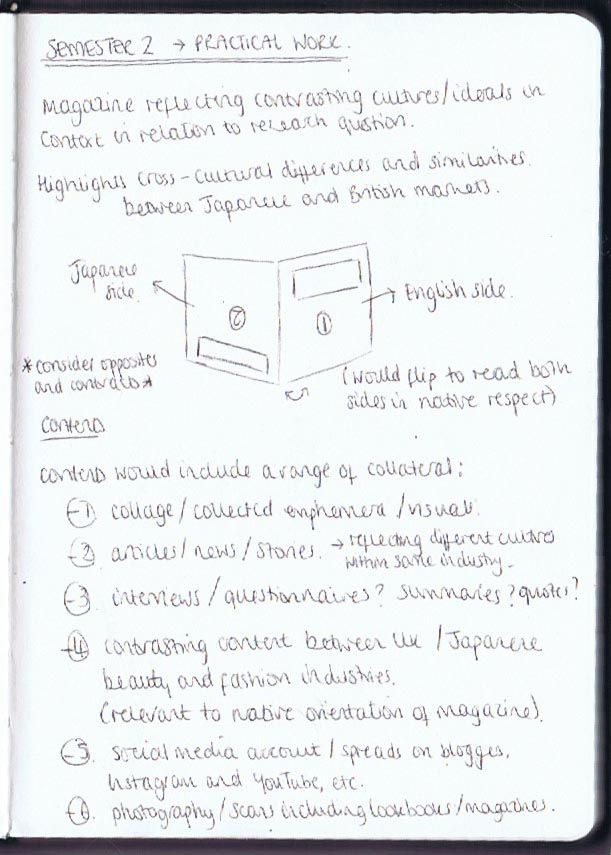 Above: Initial ideas for the full magazine, which will now be produced in semester 3. I have decided to produce this as my final major practical project, for various reasons:

By working on a smaller scale initially, this will allow me to prototype a mini-mag/zine, which will allow for any problems which may arise to be alleviated prior to working on the final outcome, enabling a smooth and straight forward process in Semester 3. 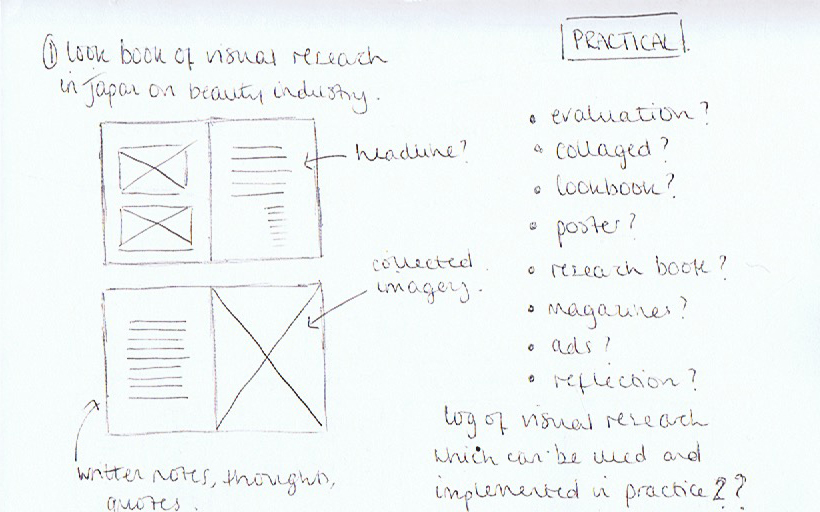 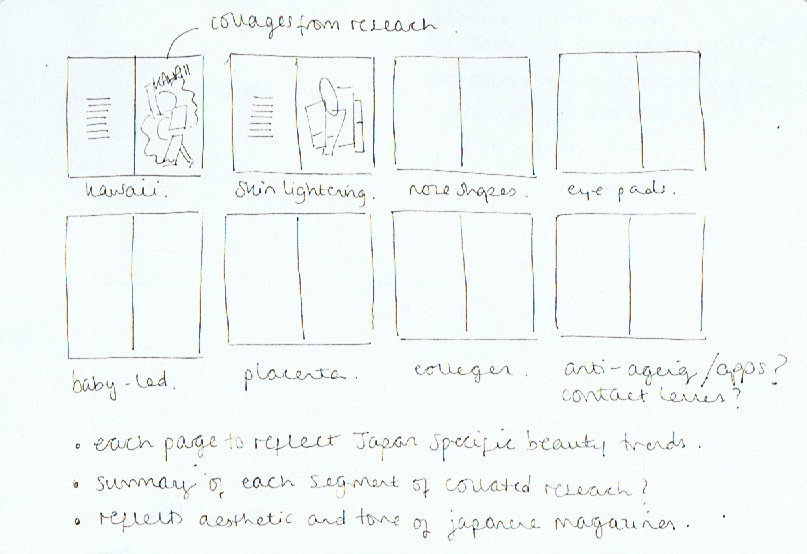 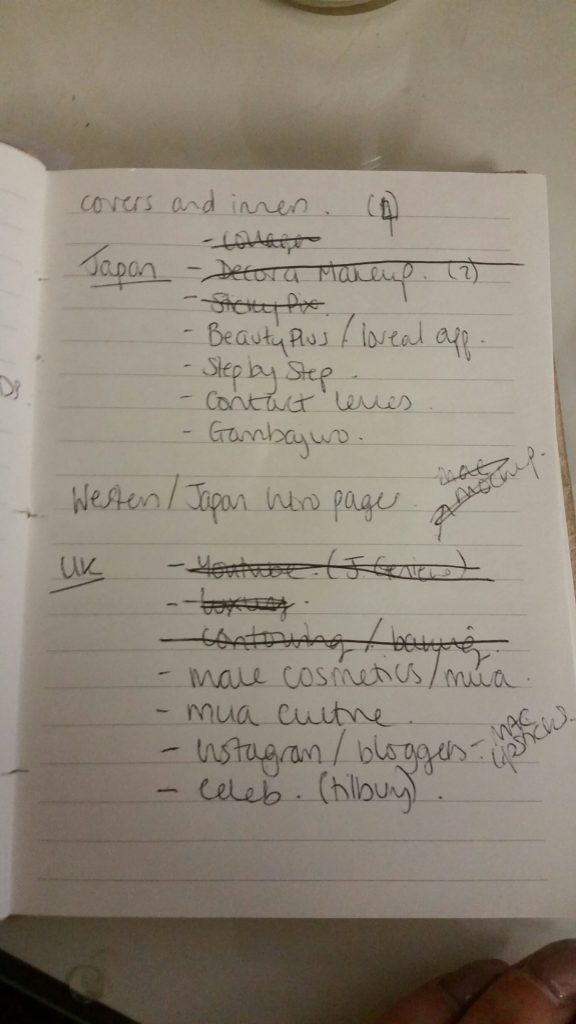 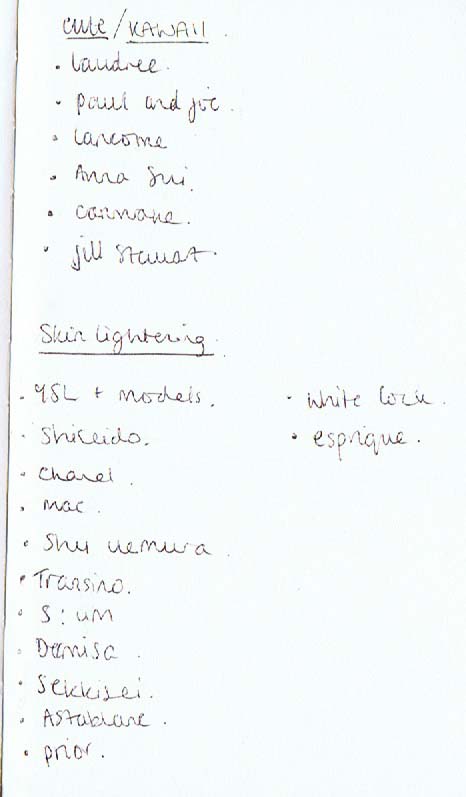 Above shows planning and idea development for the different spreads of the Japanese pages and Western pages, specifically looking at which trends should be translated into artwork. Not all of these will be used however by creating a list based on visual research I have collated it enabled me to make a start on the practical elements. In addition, lists of brands to look at/collect imagery for per spread were written as shown above. Again this was created through going through visual research and magazines collected in both the UK and in Japan. 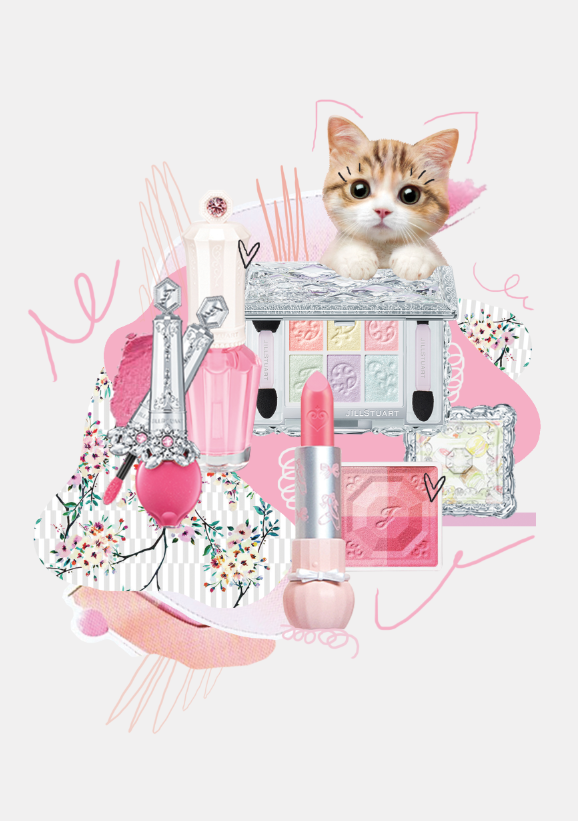 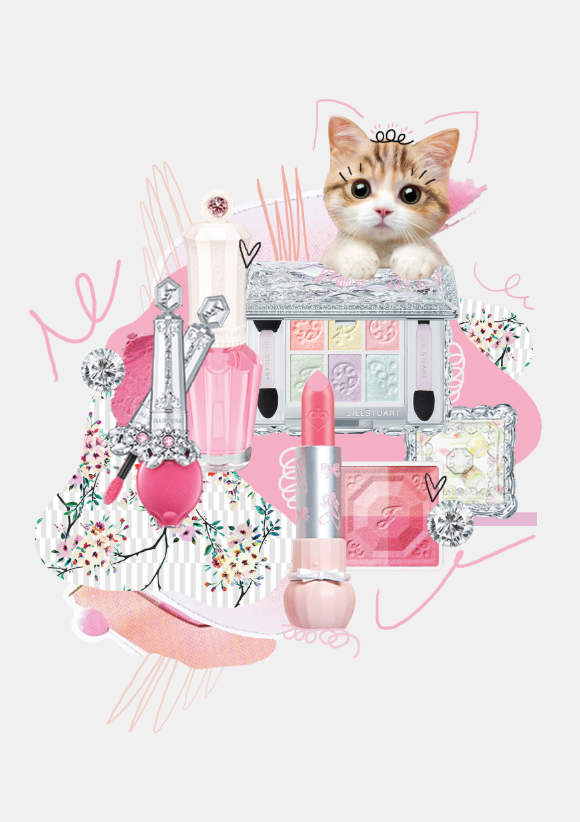 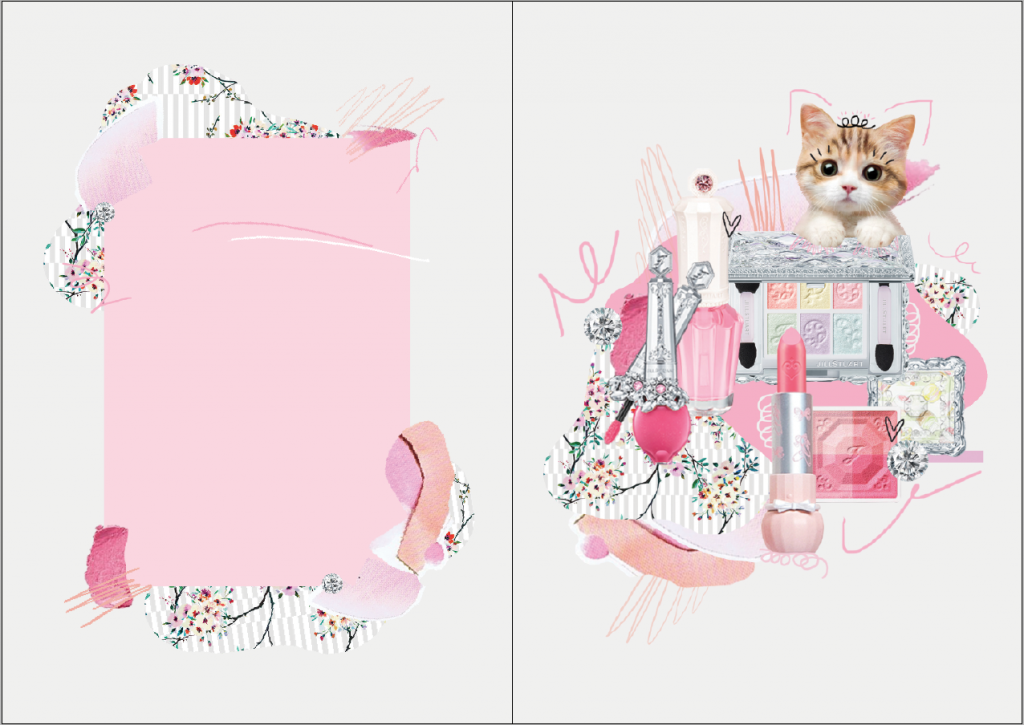 Above shows development of the “kawaii” or “cute” theme derived in Japan, focusing on a youthful culture who still want to capture their childhood through their choice of playful product. In addition, these Korean inspired products are seen all around Japanese drug stores and high-end stores as seen in visual research collected from my Japan trip. Similar to Harajuku subcultures such as Dacora, this is a rebellion and reaction to conformation and standardisation in Japan, and by buying into these form of products, one is seen to have an individual identity opposed to a controlled identity, which I feel is important in regard to self-perception and relaying this to a Western audience, whereby one can be who they want to be generally without any questions being asked or external socio-cultural pressures.

Aesthetic influences have been taken from the local and national magazines noted on my blog, which were collected in Japan, whilst taking into account other aesthetic influences from collage artists, also previously discussed on my blog. It was important to get across a cute, youthful and playful element in the spread whilst taking influences from the product packaging and brands used themselves, i.e. diamonds inspired by Jill Sander and Kittens inspired by Paul and Joe, and CanMake – seen in photos of beauty products/packaging/pos collated in Japan and noted on a previous post also. 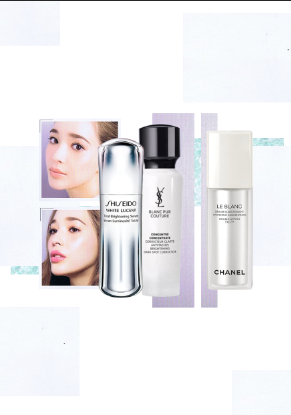 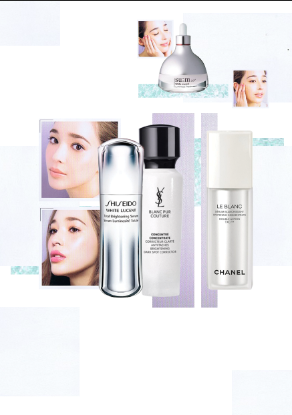 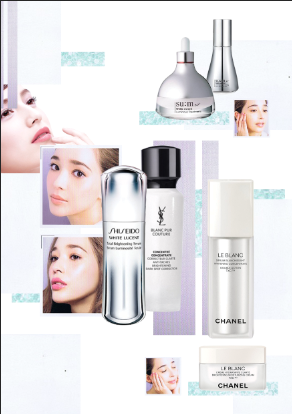 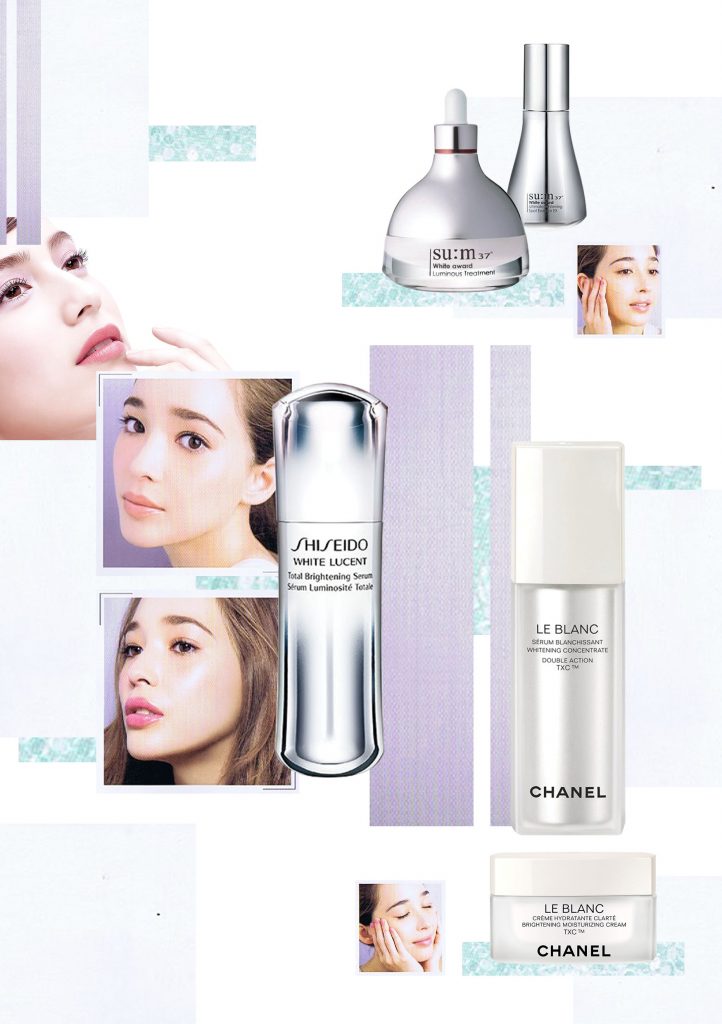 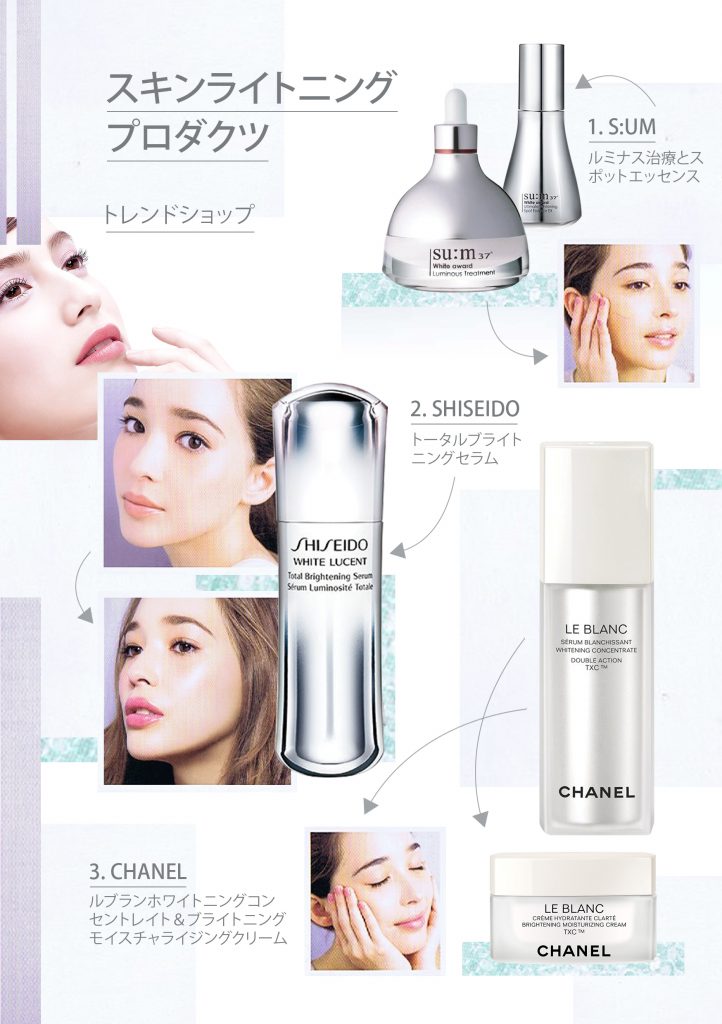 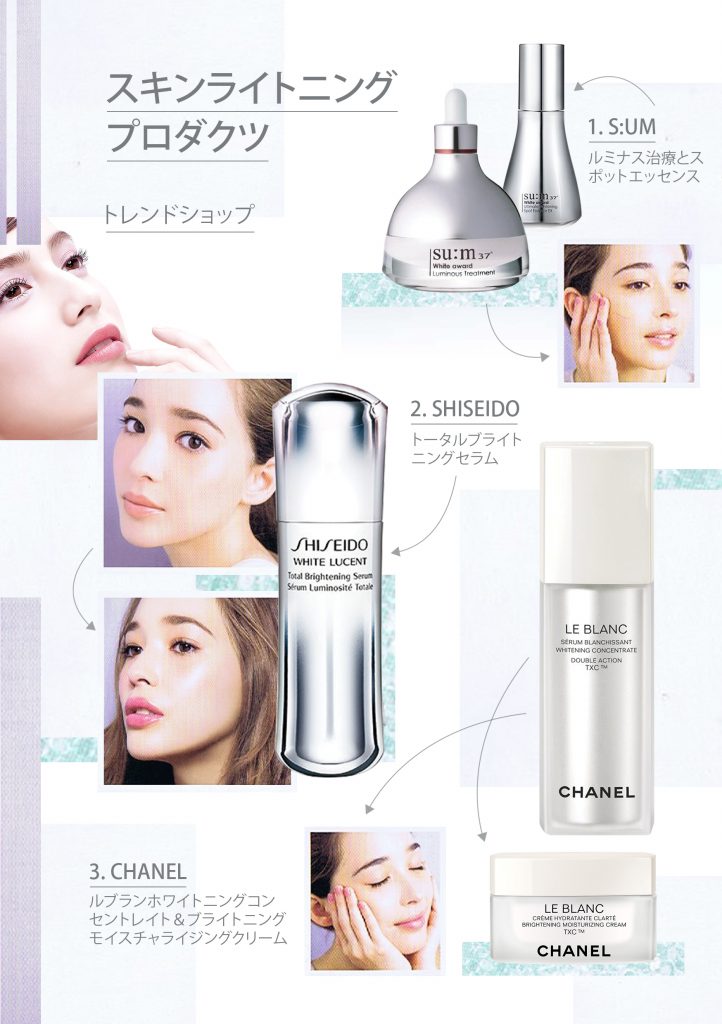 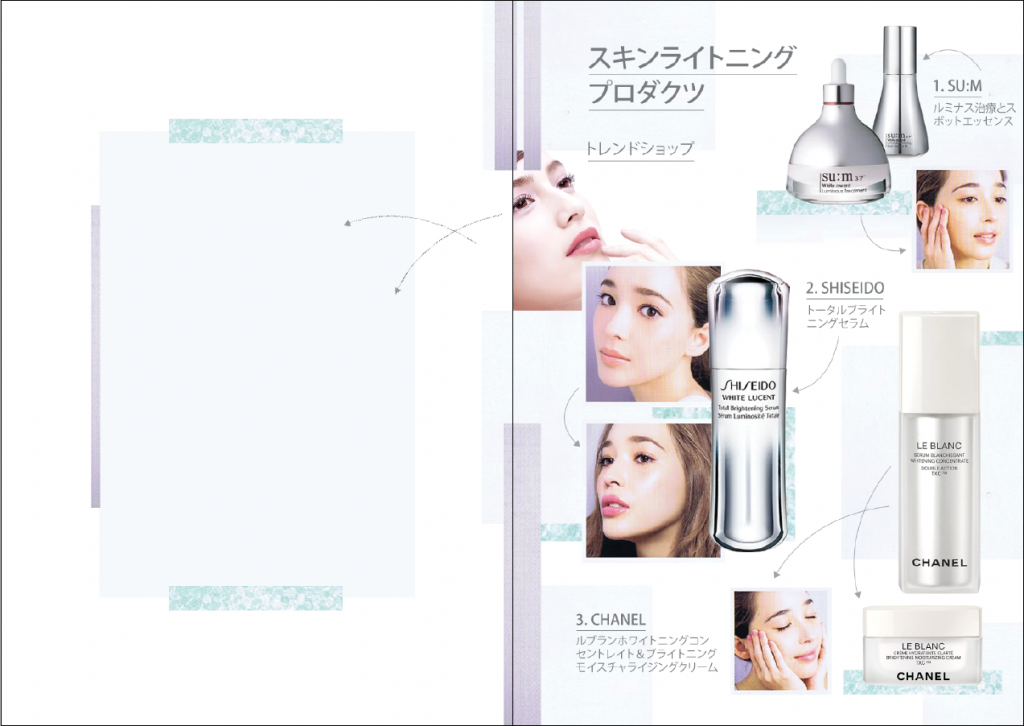 Above shows the development of the skin-lightening trend collage and spread, showcasing the beauty trend which is most predominant in Japanese culture, and can be seen in examples of beauty products and in magazines collated in Japan. Even though Japanese skin-lightening trends stem from socio-cultural and historical traits there is an underlying modern influence from Western ideals, global consumerism and brand standardisation which comes into play making this trend very diverse and multi-contextual. The spreads showcase this through showing a range of ‘international’ and ‘Japanese’ brands which have adapted their product ranges to such trends, whilst showing a range of stereotypical images of youthful looking, light skinned Japanese women denoting their ‘ideal’. This spread explores how such trends can influences ones self-perception of self-hood and self-worth, whilst taking aesthetic influences from Japanese local and national magazines. This is a theme which has been discussed in depth in my dissertation due to having such a contrasting ‘ideal’ to that of Western women wanting to be tanned in order to represent affluence – in Japanese culture, the lighter the skin tone, the richer you are, the darker the skin tone, the poorer you are; relating back to historical working classes, aristocracy and the era of the Geisha.

This also relates back to various theoretical perspectives and studies relating to Japanese culture, as carried out by Shiseido and discussed on my blog for example, as well as in my dissertation. Light make-up and youthful, light skin are seen as favourable and this is what is represented in the ideal above. The lighter the skin, the younger it is also said to look (Tagal, et al. 2016). 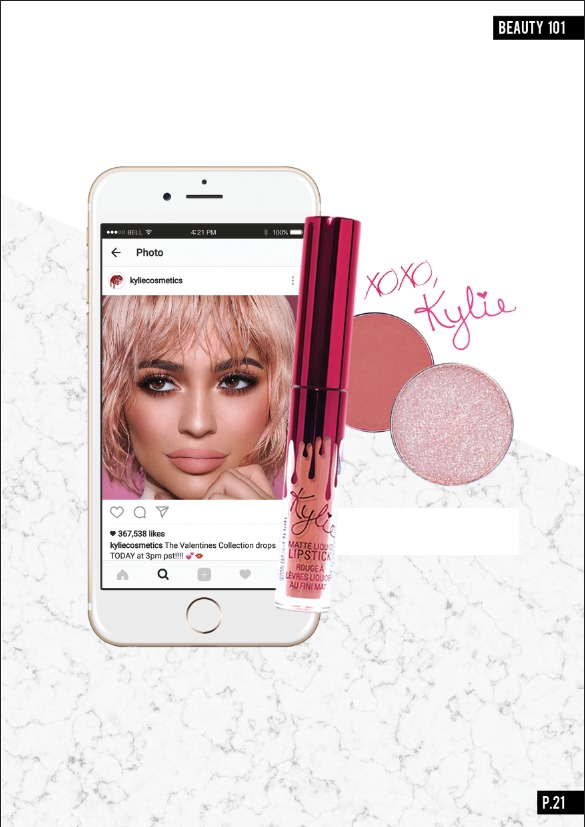 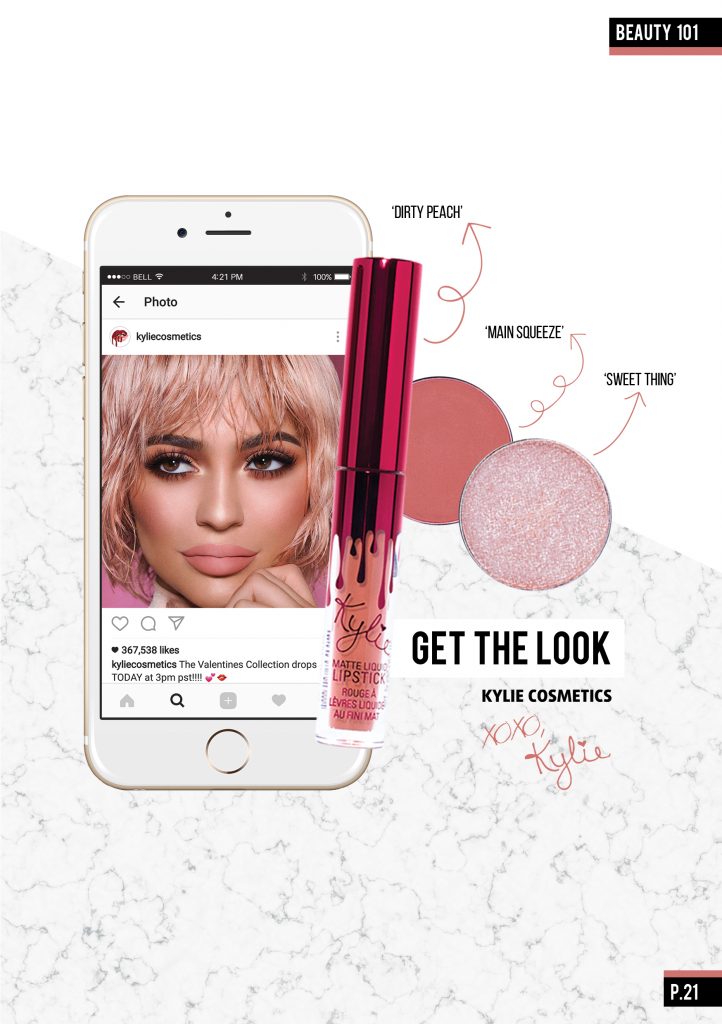 Above shows the development of the Kylie Cosmetics “get the look” artwork, which has been discussed in depth on another blog post analysing this development and design in detail. 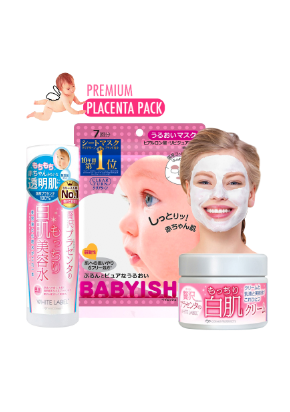 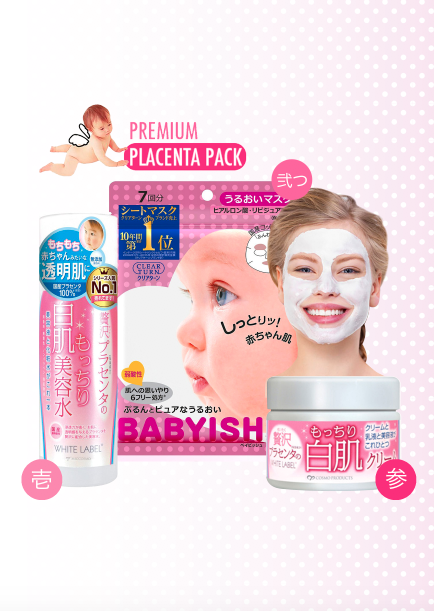 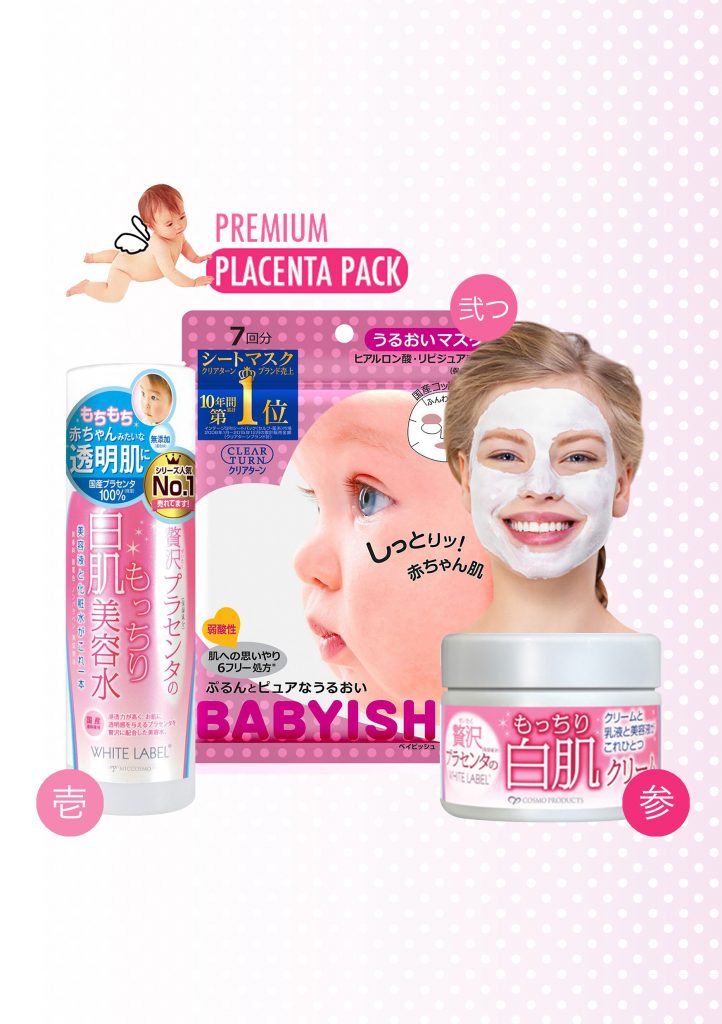 Above shows the ‘anti-aging/baby endorsed’ product page, inspired by my findings whilst researching in Japan. I wanted to relay how and why babies are often used to relay youthful skin, stemming from the obsession with everything child-like in Japan, and that child pornography was only banned in 2014. I feel this explains why such imagery is used so openly in Japanese culture and beauty products to relay ‘end-results’ being a norm opposed to a contrast of British/Western cultures. In addition, Western women are also often used to show how this relates back to the end-user, using babies as a signifier of ‘soft skin’.

The background texture has been inspired from the product packaging itself, emphasising a pink, youthful, feminine and playful aesthetic and tone. Polka dots and stars are often seen on packaging and promotional materials for the products of White Label by Cosme (the products shown above); examples of this can be seen below. In addition, blue has been used to complement the product packaging whilst not only stereotyping ‘girl babies’ – this is also reflected below. Japanese numbers have been used in order to mimic that of a Japanese step-by-step guide, as most Japanese women expect to know how to use products, in what order and what they will achieve by doing so as previously discussed in my research in interviews and in regard to aesthetics and design. The above shows that with the 3 products, one can achieve such end results and have ‘baby-soft’ skin. By using a western female model, this allows also for the artwork to hint at self-perception issues of the Japanese women and target audience, whereby using such products will give lighter skin just like Western women, whilst also contrasting and complementing the Western baby used on the face mask packaging with blonde hair and blue eyes – a baby version of the adult on the right hand side. 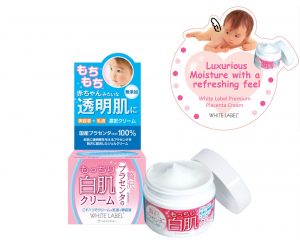